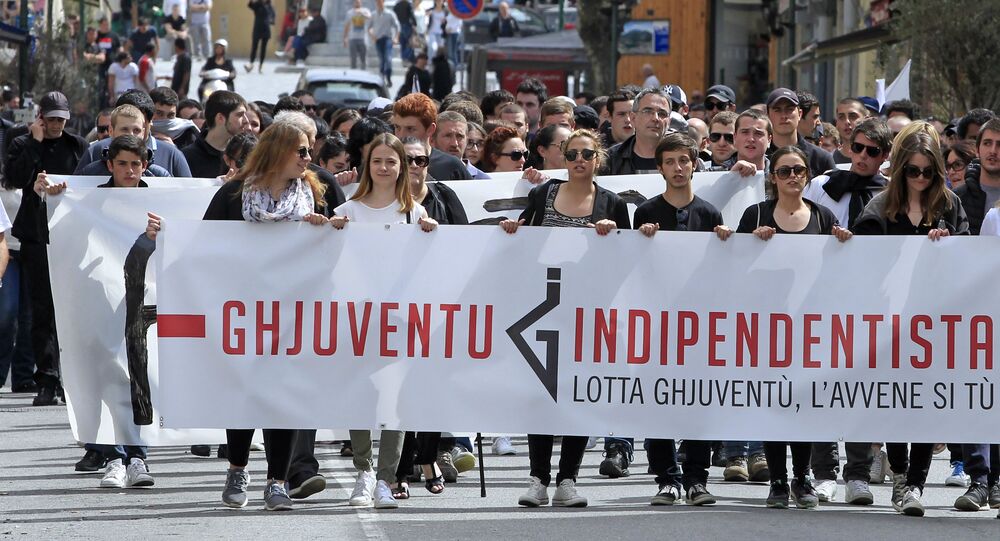 An emotional yet purposeful fight for independence shows no sign of abating in Corsica, RT correspondent Daniel Bushell reported.

© AFP 2021 / LLUIS GENE
Catalonia Sent Multiple Requests to Madrid to Host Independence Referendum
More and more Corsicans have come to realize the necessity of their island's secession from France, according to RT's Daniel Bushell.

He referred to recent opinion polls, which showed that at least two thirds of Corsicans support the idea of holding a referendum on the independence of Corsica, which France annexed back in 1768.

Ironically, one third of Frenchmen also call for Corsica to leave their country, Bushell said, adding that Corsica has the highest level of violence in Western Europe, according to some estimates.

© AFP 2021 / PASCAL POCHARD CASABIANCA
Some two thousands people hold a banner that reads "Amnistia" during a protest organized by the "Ghjuventu Indipendentista" (Youth Independence) movement in Ajaccio, Corsica, on June 13, 2015

Advocating an independent state on this Mediterranean island is the National Liberation Front of Corsica (NLFC), a militant group that is seen by Paris as a terrorist organization. In 2014, the NLFC announced the definitive cessation of its armed struggle.

The flag of Corsica is just a black guy's head, FYI. pic.twitter.com/Fs66yfmBsc

At the time, the Pe a Corsica (For Corsica) bloc gained more than 35 percent of the votes in the second round of polls, giving it 24 of the 51 seats in the local authority council. The Pe a Corsica's main demands include giving the Corsican language official status, a special tax regime for local residents and amnesty for political prisoners.

© AFP 2021 / ADRIAN DENNIS
Scotland to Demand Second Independence Referendum If UK Exits EU
According to nationalist leader Gilles Simeoni, who is also the mayor of Bastia, the island's second-largest city, "if the Corsicans want independence, no one will stop them."

He was echoed by a Corsican who spoke to RT on the condition of anonymity. "Corsican people are being systematically destroyed. About 5,000 people, mostly French, come to Corsica annually to but land there. Only 23 percent of our students study our language. The country's authorities continue to frenchify Corsica, and our culture goes into oblivion," he said.

After Catalans, Basques Launch Process for Independence From Spain

Majority of Germans Polled Believe Regions Have Right to Independence