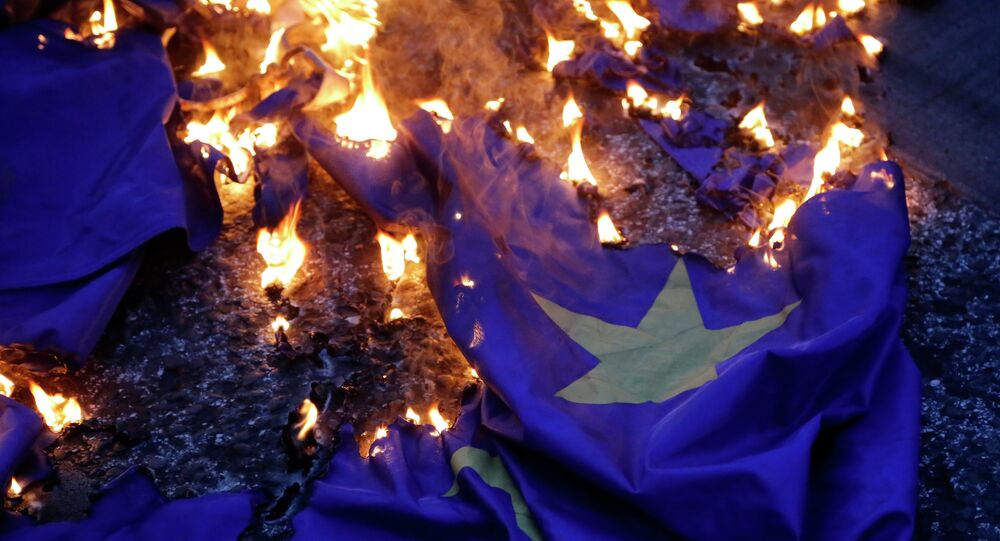 Not since the moment of its creation has the project for a unified Europe faced the kinds of existential threats which have plagued it in the last decade, writes French journalist Jean Quatremer.

In his recent editorial for French daily newspaper Liberation, columnist Jean Quatremer suggested that the continent's never-ending economic crisis, compounded by a flood of refugees brought on by Western adventurism in the Middle East, threatens to push the European Union project to the breaking point.

"Will the European Union make it through 2016? Never since the European community's formation in the 1950s has the project faced such a succession of shocks," the journalist suggested.

© AP Photo / Thibault Camus
Domino Effect: Buchanan Predicts Dissolution of EU, Is US Next?
Quoting the pessimistic commentary of EU Commissioner Guenther Oettinger and EC President Jean-Claude Juncker, the former recently suggesting that the EU could disintegrate, and the latter stating that he has 'no illusions' about the supranational union's prospects for 2016, Quatremer lamented that ever since the 2008 crisis, Europe has found itself between a rock and a hard place.

"Since 2008, the situation in Europe has gone from bad to worse. It all began with the US financial collapse of 2007, which gave birth, in 2008, to an economic crisis –the worst since 1929, which seems to have no end in sight for Europe."

This crisis, which nearly destroyed the Eurozone, has only been exacerbated by "the adventurism of American foreign policy, and that of the British and the French, destabilizing the Mashriq (the Arab countries east of Egypt) and the Maghreb (the Arab countries of northwest Africa west of Egypt), prompting a million people to seek refuge on the continent and leading to the outbreak of a wave of terrorism on European soil."

"Meanwhile," in 2013-2014, Quatremer continued, the fumbling efforts of 'communal diplomacy' "awoke the Russian bear," causing a crisis in Ukraine and leading to a level of tension unknown since the Cold War.

© AP Photo / Virginia Mayo
Happy New Year! UK Paper Warns Readers About Terminal Decline of the West
Moreover, the onset of the migrant crisis, the journalist noted, "revealed gaping fractures between Eastern and Western Europe, demonstrating that the EU's enlargement had turned out to be a botch job."

"If for some Western European countries, primarily Germany, the concepts of asylum and respect for minorities are values inherited from a troubled and violent history, for the old people's democracies of Eastern Europe, this is not the case…While fond of European money, and the rights offered by the EU, solidarity for them is a one way street: they have thus far refused to help the countries overwhelmed by the sudden influx of refugees, even if many of them are partly responsible for the situation, having joined the US intervention in Iraq in 2003."

These economic and civilizational crises, Quatremer says, has led to the rise of European populists appealing to values which have a dangerous right wing tinge. "Following the crisis of 1929, many countries came to the conclusion that fascism would be the best response to the challenges of their time. 80 years on, nations are once again tempted by extreme solutions, this time termed as 'populist'."

"Today, right-wingers with authoritarian tendencies are in power in Poland and Hungary, and participate in government in Belgium, Denmark and Finland. Their strength is growing in Sweden, France, the Netherlands, and Italy. Ultimately, only Germany and the countries that have recently experienced dictatorship (Spain, Portugal, Greece) seem immune. Islamist terrorism, meanwhile, only strengthens these parties."

"How long will the EU, a project born from the ruins of the post-war period, be able to resist the wave of xenophobia and paranoia which once against threaten to take control of our old, exhausted societies?" Quatremer asks.

"Nothing," the journalist concludes, "seems able to prevent the return of the national interest over that of the union, driving Europe into the abyss."

Domino Effect: Buchanan Predicts Dissolution of EU, Is US Next?

Poland Turns Away from Europe, Squints Across the Atlantic