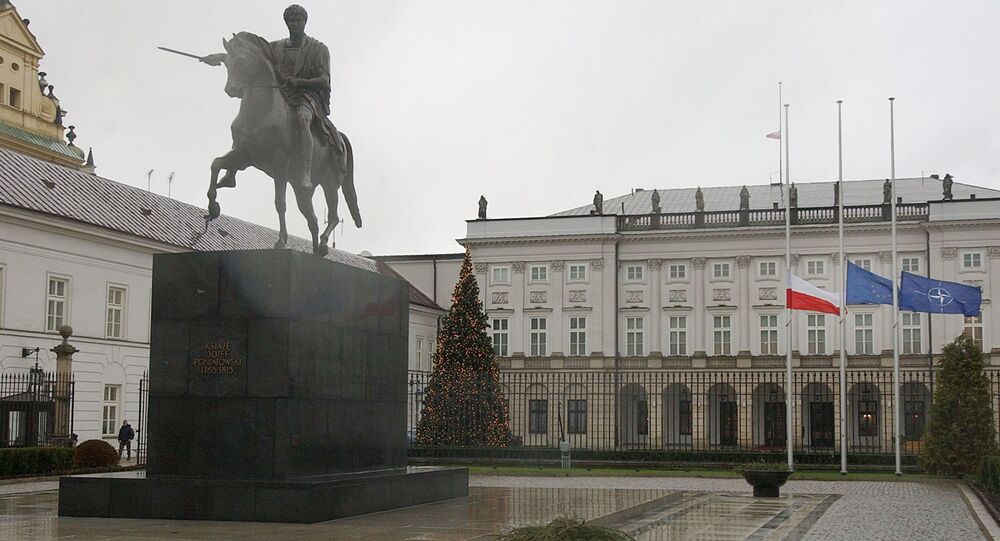 Amid the mounting refugee crisis caused by “NATO’s non-stop campaign of overseas military misadventures”, Europeans are becoming “increasingly wary of multiculturalism, neo-liberal reforms, austerity measures - and now, it seems, even NATO itself,” according to American writer and journalist Robert Bridge.

Bridge cites as an example a recent raid conducted by the Polish military police with the endorsement the country’s Defense Minister Antoni Macierewicz on a NATO-linked counterintelligence center in Warsaw as an example.

In his opinion piece for RT’s website, Bridge quotes the Polish newspaper Gazeta Wyborcza, according to which, “Authorities entered the complex using a duplicate key and then unceremoniously dismissed the director in absentia, Col. Krzysztof Dusza and replaced him with Col. Robert Bala. Dozens of other bureaucrats and assorted paper-shufflers were also relieved of their shadowy duties on the spot.”

“Nothing like this has happened in the history of NATO, where a member state attacks a NATO facility,” former Polish defense minister Tomasz Siemoniak commented on the incident to reporters.

“After all, what would cause a traditionally pro-Western country like Poland to ignore constitutional due process and risk relations with Brussels, NATO — not to mention the group’s top dog, Washington — by conducting a crack of dawn, neo-Nazi-style raid?” Bridge therefore questions.

And then provides an answer:

“Those who were surprised by Warsaw’s tough tactics fail to see which way the political winds are blowing not just in Poland, but across the EU.”

© AP Photo / Alik Keplicz
Poland Turns Away from Europe, Squints Across the Atlantic
The author further elaborates that “much of the winds of change howling through the streets of Europe can be connected to the failure of US foreign policy, and the repercussions that has had on the European status quo”.

Bridge then provides other examples of the failed promises that President Obama so easily gave away to Europe back in 2009 and the gloomy reality: “Guantanamo Bay detention facility is still open for business, Libya is in dire straits, while the US military is operating in Syria, albeit with little or no effect on Islamic State, its proclaimed target”.

“Instead of being relieved from the warmongering insanity of the Bush era, the world is still embroiled knee-deep in crisis – and in new places (Libya, Syria and Pakistan) that exploded on Obama’s watch, as well as in Russia, where the Kremlin wised up fast to the fairy tale known as ‘reset’.”

The author, however, notes that the “crises now enveloping the world are not limited to those of a military nature: Ever since the 2008 Financial Crisis, the worst economic setback since the Great Depression, Europe has been mired in dismal economic growth and high unemployment, compounded by an insane influx of millions of refugees that are only serving to erode Europe’s financial prospects, to say nothing about demographics.”

© AP Photo / Alik Keplicz
What Is NATO for? German Minister Backs Creation of Single European Army
To cope with all the hardships, “many once-proud, self-sufficient European countries (Spain, Portugal, Italy and Greece, to name a few)” are forced to take on loans “from the very same global bankers that wrecked these national economies in the first place”.

“Ever since the terrorist attacks of 9/11, Washington (and by extension, NATO) has only delivered Europe a series of global military debacles that the Old World – already suffering under the brutal dictate of IMF debt and World Bank measures – can now ill afford. Now toss a few million desperate refugees into the mix and you have awakened the raw spirit of right-wing political parties – from Le Pen’s Front National in France to Golden Dawn in Greece.”

“Personally, I can’t imagine that, in a situation where nearly every US foreign policy initiative over the last 15 years has resulted in utter chaos and catastrophe, the European people (still highly educated despite biting austerity) will fail to correctly add two-plus-two and conclude that NATO as an institution designed to defend their interests is also failing them in dramatic fashion,” Bridge therefore concludes.