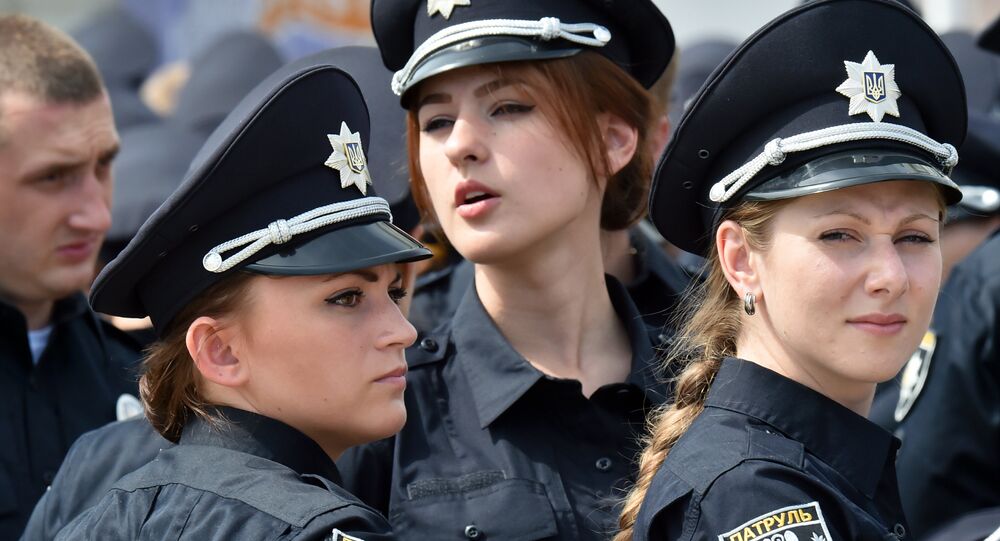 Ukraine's much-touted police reform, sponsored by Western donors, has "focused on a myriad of petty matters," but has been unsuccessful in dealing with the more serious problems, including the corruption which has paralyzed the country, Foreign Policy contributor Erica Marat explains.

This past summer, Ukrainian officials had a field day celebrating the induction of thousands of newly recruited officers into the country's shiny new police force.

Noted for their spiffy, US-style uniforms, polite manner, and public refusal to take bribes, many of them, Marat explained, "sympathized with the 2013-2014 Euromaidan demonstrations that overthrew the corrupt political order of former President Yanukovych, and…are genuinely interested in building a new, more democratic Ukraine."

© AFP 2020 / SERGEI SUPINSKY
Kiev's New Cops Prove Glamorous but Unprofessional
International experts, the journalist added, couldn't be more thrilled with the new force, touting it "as one of the brightest rays of hope in post-Euromaidan Ukraine," and describing it "as 'a force for change' and even the 'cops who would save a country.'"

And "it's no wonder the foreigners are happy," Marat wrote. "Much of the new police reform has been funded through the US State Department's Bureau of International Narcotics and Law Enforcement, with additional help from Canada and Japan."

Unfortunately, the journalist noted, "this apparent success masks some important shortcomings that could undermine [the new force] in the months and years ahead. The police reform process has been opaque and top-down, led by a few powerful officials with little input from civil society. As a result, the international donors who have partnered with the Interior Ministry risk repeating a problem that has plagued similar efforts to clean up law enforcement in other parts of the world."

"All too often, donors tend to give their help to corrupt and autocratic elites still mired in militarized and secretive systems."

© Sputnik / Natalia Seliverstova
Uprising? Nearly 1,000 Ukrainian Policemen Stage Protest in Kiev
Effective policing, Marat suggests, requires input from civil society, and even in countries like the United States, ostensibly freer and less corrupt than countries like Ukraine, is a long and difficult process.

"But Ukraine and other countries with a long history of authoritarianism lack such venues for an effective state-society dialogue. As in other post-Soviet states, Ukraine's Interior Ministry (which oversees the police) was designed to support government policies, to punish dissent, and to demonstrate the government's reach across the country."

Thus, "international donors looking for quick results risk inadvertently [or perhaps advertently?] supporting, or even strengthening, the state's punitive apparatus, without ensuring more active participation of the citizenry in overseeing the police."

"To date," Marat writes, "Ukraine's new police have been focused on a myriad of petty matters: smoking in public places, homeless people sleeping in tourist areas, and cars parking around bus stops. But the new policing model in Ukrainian cities does not explain how bigger and more violent crimes are prevented through policing small things."

© Sputnik
Cop Out
"Meanwhile, top-level police [officers] accustomed to deploying excessive force against peaceful demonstrations or operating criminal syndicates, remain unchallenged and unreformed. And while a shiny new police force might challenge small-scale corruption, there has still been no serious anti-corruption drive from the top."

"Even more worrisome," the journalist notes, "are the Interior Ministry's plans to organize a new SWAT force supported by the US Drug Enforcement Administration, the Border Patrol, and the State Department's Bureau for Narcotics and Law Enforcement." Such an apparatus, Marat notes, has left many worried that "adopting the US model for a militarized police force will allow Ukraine's leaders to use brutal force against anti-government demonstrations in the future."

Taking a look at the more 'successful' instances of police reform within the Soviet bloc, Marat recalled Georgia's efforts under disgraced former president and current Odessa governor Mikheil Saakashvili. "The Georgian police reform," she noted, "eradicated petty corruption and gained international praise for its dramatic break with the repressive past."

© AP Photo / Sergei Chuzavkov
Nothing Good Will Come of It: Ukrainian Cops to Learn From US Police
"Yet Saakashvili's reform also transformed the Interior Ministry into the single strongest government body, one amply equipped to spy on the political opposition. Unfortunately, the methods used to direct top-down reform in Saakashvili's Georgia are now being replicated in post-Euromaidan Ukrraine," with civil society largely left out of the loop, and "the vision of change…transmitted directly from the deputy-minister level to specific projects on the ground, bypassing public discussion."

Ultimately, Marat suggests, the tendency of projects for police reform funded by foreign donors is to "operate under the assumption that reformed police forces will, thanks to greater professionalism, assume a neutral role in the political landscape, thus safeguarding the democratization process. So far, however, there is little evidence that this is happening in the former USSR."

In the countries which have received Western assistance, political arrests, interference in the work of the mass media, and the suppression of anti-government protests remain commonplace, she notes. "In worst-case scenarios, the police use skills acquired through donor training projects to carry out the political decisions of the incumbent elites."

How this will be possible in a country which has witnessed a pseudo-revolutionary coup d'état to rotate one set of oligarchs for another, while openly criminal 'volunteer battalions' formed during the unrest not only thrive, but have been integrated into the Interior Ministry and the military, remains unknown.

Nothing Good Will Come of It: Ukrainian Cops to Learn From US Police