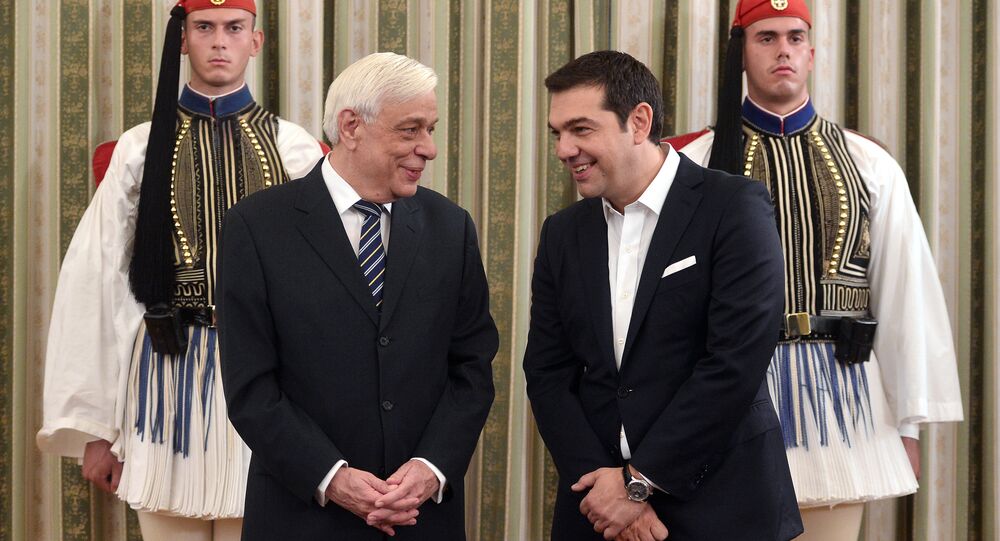 Greece's president is seeking to pull his country out of its ongoing debt crisis and to change his prime minister’s dress code.

© AP Photo / Anatolia, Kenan Gurbuz
Greek Defense Minister Slams Turkish Violation of Airspace in New Year Speech
Greece’s President Prokopis Pavlopoulos expressed hope that in 2016 his country will quit the memorandums it signed with international creditors, which outline the bailout rules for Greece, and that Prime Minister Alexis Tsipras will be able to start wearing a tie again.

"This year we’ll quit the memorandums and you’ll start wearing a tie," Pavlopulous told Tsipras, according to Athens News Agency.

The prime minister replied that the president had "set the bar high" for him.

Prior to assuming the office of prime minister, Tsipras swore that he won’t wear a tie until his government got rid of the country’s massive debts.

The Greek economy has been badly strained for several years; the country had amassed billions in debt after the 2008 world economic crisis.

In August, Greece's international creditors, including the International Monetary Fund, the European Central Bank and some eurozone nations, approved a third bailout package for debt-ridden Greece, worth about $94 billion, in exchange for additional reforms and austerity measures such as pension cuts and tax hikes which were widely criticized at home.