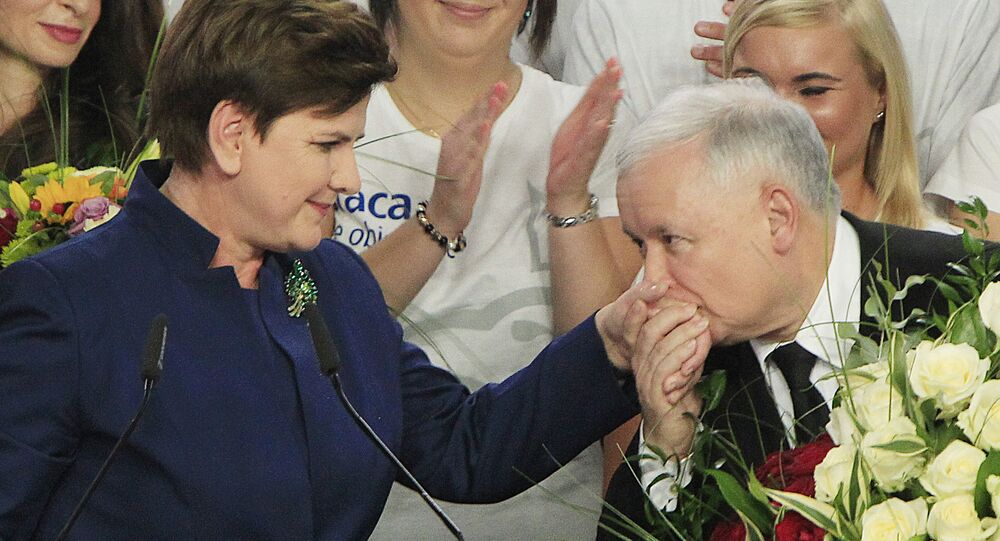 In the coming year the EU may be in for a new shock with a right-wing government in Poland adding to the EU’s worries about the recent financial meltdown in Greece, the migrant crisis and Britain’s possible exit from the 28-nation bloc, Austria’s Der Standard wrote on Monday.

© AFP 2021 / WOJTEK RADWANSKI
Will Poland Be the Next Chapter in the Political Crisis Plaguing Europe?
According to the newspaper’s political observer Eric Frey, the far-right Law and Justice party, the winner of recent elections in Poland, has no respect for the EU’s democratic values and adheres to the long-condemned principles of Polish fascism.

Eric Frey focused his attention on the Law and Justice Party’s leader Jaroslav Kaczynski whom he described as a “reactionary fixated on all sorts of conspiracy theories.”

Vladimir Bruter, an expert at the International Institute of Humanitarian and Political Studies, a Moscow-based think tank, told Radio Sputnik what really worried the EU leadership was that Poland could end its unconditional support for any ideas coming from Brussels.

“The main threat Poland now poses to the EU is that its new leaders never promised to be liberal… They are Euro-realists but more of the Euro-skeptic kind. Which means that they will not automatically endorse everything Brussels says,” Vladimir Bruter told Radio Sputnik.

“This is a far-right party but it has nothing to do with fascism. As to relations with Germany, the present Polish government and the president believe that it is a country they should stay clear of. Which, of course, is a problem for the EU… Nationalist tendencies have always been strong in Poland, whose leaders believe that their country is self-sufficient,” he noted.

“The majority of Poles don’t think so, but Poland is now being run by people who believe that their country should not necessarily toe the line charted by the European Union,” Vladimir Bruter said in conclusion.

Will Poland Be the Next Chapter in the Political Crisis Plaguing Europe?