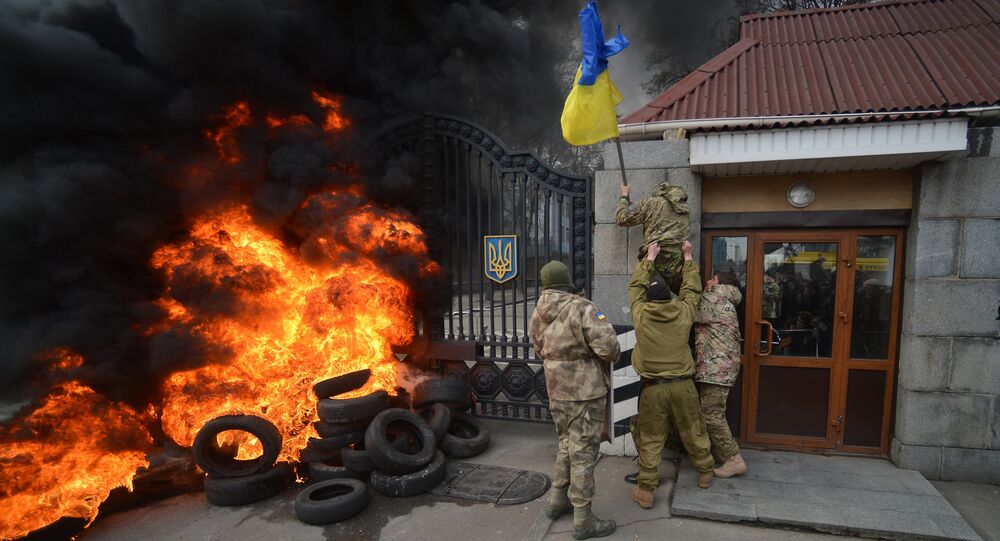 Terror in Southern Ukraine Forcing Residents to Take Up Arms

Residents of the southern Ukrainian region of Kherson are forming self-defense forces composed of war veterans and hunters to defend against marauding criminal elements who have instilled terror in the local population by a campaign of robberies, assaults and violence, local media reports.

Earlier this week, Ukrainian news portal Politnavigator.net reported that residents of Kherson region's Kalanchak district, bordering Russia's Crimea, "are taking up arms and creating self-defense units" with the aim of defending against armed bands attacking local residents and stealing property, as the police and other security organs stand idly by.

Speaking to local media on Wednesday, Kherson Regional Council deputy Evgenii Krinitsky confirmed that "what is going on there is simply complete lawlessness. An organized criminal gang is operating here; over the past two months they have stolen five cows, robbed local residents and business people, assaulted people up and come into the local police station armed. There are a number of victims, including people with gunshot wounds. Unfortunately, law enforcement hasn't done anything about it."

© AFP 2021 / VIKTOR DRACHEV
Erdogan Meets With Key 'Crimean Blockade' Organizers: Is Naval Provocation Imminent?
Locals, Krinitsky suggested, have been brought to the breaking point, and have announced their readiness to use weapons against the marauders. "We may face bloodshed in the district," the official warned.

According to local media, the situation in the region escalated after groups from the Aidar territorial defense battalion, a volunteer detachment of Ukraine's Ministry of Defense, took up positions in the area. One of their attacks was recently captured by surveillance cameras.

​"Aidar Battalion fighters robbing and beating up residents in the Kherson region."

During the incident, Aidar fighters attempted to steal a minivan in the village of Alexandrovka, beating up a local farmer and his son in the process. The farmer, a veteran of the Soviet war in Afghanistan, called on his war buddies to help him beat back the attackers.

The next day, the bandits attacked a local police post, looking to burn the police report on the previous night's incident, and to stock up on the local weapons cache. Local police were caught off guard, and forced to lie face down on the ground during the attack. Fortunately, the arms stock room was locked, and the bandits remained unable to open it.

Following the attack, to the shock of locals, police officers simply closed the station and went home, leaving the area without police protection.  As a result, local farmers and hunters have announced that they would form defense units, comprised of up to 300 local men armed with hunting rifles, and promised to attack Aidar checkpoints if they do not leave the area.

© Sputnik / Pavel Lisitsin
Power Transmission Towers in Ukraine 'Blown Up' Causing Blackout in Russia's Crimea
On December 18, members of the 'Kherson' territorial defense battalion, a detachment of the Ukrainian Ministry of Internal Affairs, arrived in the area, but were not granted permission to arrest the perpetrators, allegedly on orders from higher up.

With the nearby Chaplinsky and Genichesky districts facing similar banditry, Natalia Vozalovskaya, chairwoman of the Association of Village Councils of the Kherson Region, explained that the armed groups terrorizing the area originally arrived there to participate in the so-called blockade of Crimea.

Attacks have become a regular occurrence, a local café owner recently attacked and beaten a day after Aidar fighters broke into the café and beat up patrons. More ominously, the farmer who fell victim to the bandits has since said that three women in Krasniy Chaban and Kalanchak had disappeared, with other girls and young women evacuated from the area to live with relatives in other regions.

Commenting on events, and the Aidar Battalion's involvement, Eduard Popov, a political scientist and Rostov-region representative of the self-proclaimed Donetsk People's Republic, told Russian newspaper Svobodnaya Pressa that he isn't at all surprised by the news.

"The Aidar Battalion originated in the Lugansk region. Its backbone initially consisted of local residents who had declared that they joined for ideological reasons. However, it soon turned into a mob, and it quickly became obvious that the unit actually consists mainly of lumpen elements. Under the banner of 'fighting for Ukraine's independence', Aidar soon came to engage in looting, racketeering, and so on. To this day, Aidar remains not a combat unit, but a gang."

© Photo : Facebook
Kiev's Leaky Blockade of Crimea Degenerating Into Banditry
Law enforcement's inactivity, Popov notes, indicates that they "seriously fear" the volunteer unit. "In this regard, the actions of local residents who do not want to tolerate such lawlessness are of course completely justified and necessary. They have no other choice but to take up arms."

The analyst does not believe that residents' defense units against the marauding nationalist battalions will take on a mass character in the coming year. "Regional and central authorities will do their best to gloss over the conflict. The root of the problem, however, will not be resolved. There is nothing to indicate that Kiev will be able to rein in the nationalist battalions. And so, new formations will continue to form, and will engage in conflicts with the nationalist self-defense battalions and the marauders."