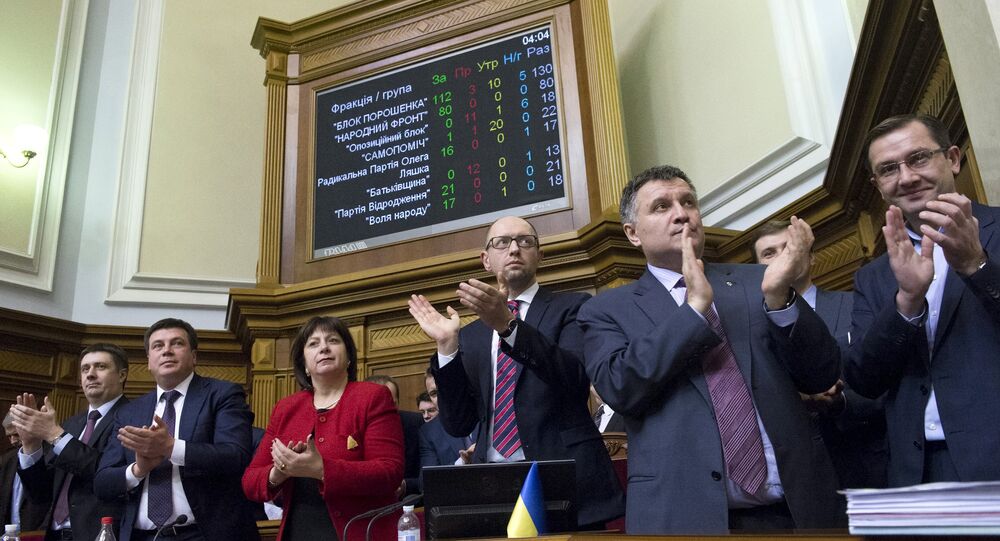 Ukraine's "unrealistic" budget for 2016 is very unlikely to help Kiev avoid bankruptcy, according to the German newspaper Deutsche Wirtschafts Nachrichten.

© Sputnik / Stringer
Poroshenko Approves Plan for Foreign Troops to Join Drills in Ukraine
Ukraine has adopted an "unrealistic" budget for next year with a deficit totaling 3.7 percent of its GDP. The Ukrainian government hopes that the measure will help it to avoid bankruptcy, the German newspaper Deutsche Wirtschafts Nachrichten reported.

The newspaper said that by approving the budget, Kiev has formally met the International Monetary Fund's condition for handing over the next tranche to Ukraine.

However, the money is unlikely to improve the situation in the country, because, as a rule, it usually lands in the pockets of corrupt officials, according to Deutsche Wirtschafts Nachrichten.

The newspaper went on to say that against the background of the catastrophic situation in the Ukrainian economy, it will be impossible to implement the budget, which, however, may allow Kiev to avoid bankruptcy and at least formally meet a condition of the IMF to provide Ukraine with the next credit tranche, worth 1.7 billion dollars.

© Sputnik / Ramil Sitdikov
No Pressure: Why the EU is Fine With Ukraine Violating the Minsk Agreements
Years of mismanagement and corruption as well as the conflict in the country's east have put Ukraine on the brink of bankruptcy, Deutsche Wirtschafts Nachrichten said.

Earlier this year, Kiev received almost 10 billion dollars from the IMF and other international investors. The goal was to improve the financial situation in the country, but little has changed since then and the level of corruption shows no sign of decreasing, the newspaper said.

In Ukraine, such loans are typically managed by regional networks, the economic model of which stipulates the delivery of foreign money to their own financial channels, Deutsche Wirtschafts Nachrichten concluded.

Ukraine 2016 State Budget to Be Base for Reforms Implementation - President