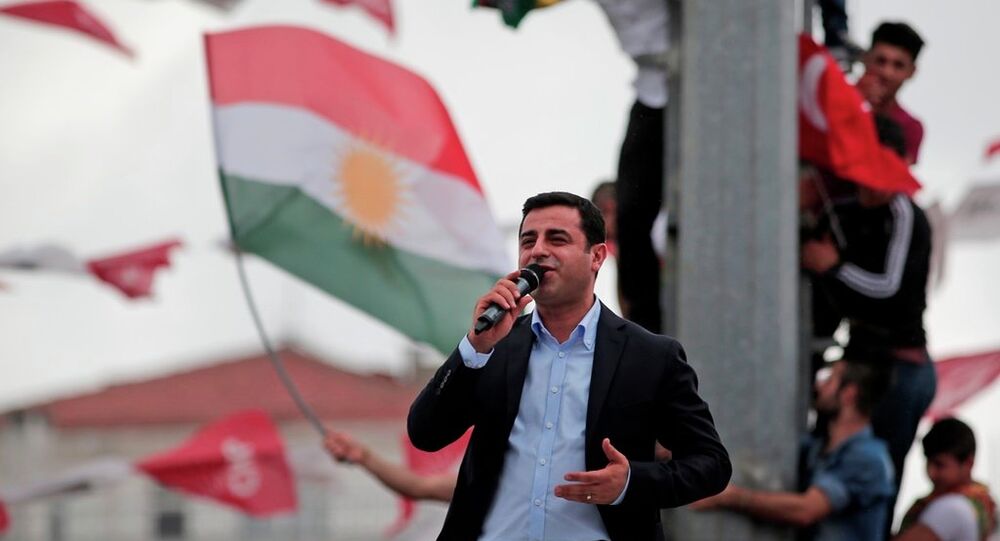 © AFP 2020 / STRINGER
Turkey Pro-Kurdish Party Leader Plans to Meet Russian FM in Moscow
Russia needs to talk to the Turkish opposition as the current cool in relations with Ankara should not be allowed to affect the traditional ties between the Russian and Turkish people, several leading political analysts told RIA Novosti in Moscow.

Sergei Demidenko, a Moscow-based political scientist, said that a dialogue with various political parties in Turkey reflected Russia’s desire to maintain close ties with the Turkish people regardless of who is now in power in Ankara.

“Of course we are trying to show that we want to cooperate with political forces in Turkey, which we believe are more progressively-minded and willing to negotiate,” Demidenko said.

“I’m not ruling out contacts we could have with the People’s Democratic Party, which is the main opposition force in Turkey,” he added.

Boris Dolgov, a senior Arab and Islamic-affairs expert in Moscow, said that contacts between the Russian Foreign Ministry and the Turkish opposition party were a step in the right direction.

“The present cool in our relations with Ankara will not go anywhere any time soon. At least as long as the current government remains in power in Ankara,” he noted.

Dolgov added that, while maintaining a dialogue with other opposition parties in Turkey, Russia would hardly have any contacts with the Kurds, including the Kurdistan Workers’ Party, which is outlawed in Turkey.

“Contacts with members of the country’s legal opposition are very much possible though. It is normal international practice. We need to talk to their opposition parties which seek power via democratic elections,” Boris Dolgov emphasized.

According to Tarhan, the political conflict has seriously undermined Turkey’s economic ties with Russia and the country’s opposition and business circles have offered many opportunities for dialogue.

"I see not only the political, but also the economic measure of what happened in the situation between our two countries… The high level of our economic cooperation of the past few years shows that very close, friendly, familiar ties have formed between Turkey and Russia," Tarhan said.