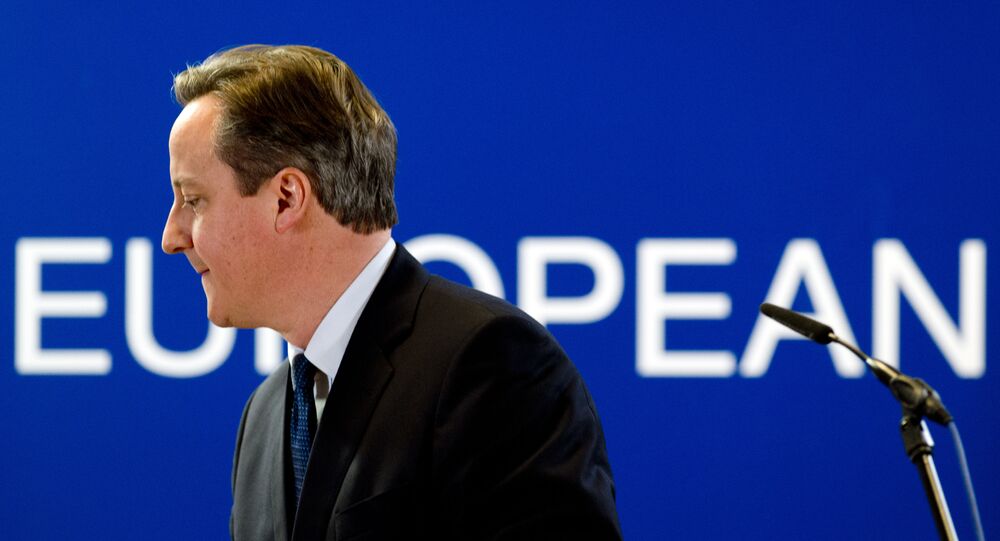 Cameron Under Pressure as 'Most Conservative MPs Leaning Towards Brexit'

UK Prime Minister David Cameron has come under increased pressure over his EU reform negotiations after senior MP Liam Fox joined the campaign to leave the bloc, amid claims most of Cameron's Conservatives MPs are leaning towards voting for a Brexit.

© AFP 2021 / THIERRY CHARLIER
EU May Reach Deal on Terms of UK Membership by February
In a huge blow to Cameron's attempts to get MPs to support staying in the EU, former defense secretary Fox said "it is time to end the pretence" that Europe is moving in Britain's direction.

The comments come after the prime minister said Europe was coming around to Britain's point of view, following an EU summit on the matter last week.

In an opinion piece for the Sunday Times, Fox criticized Cameron's attempts to renegotiate the UK's membership agreement with the EU, likening it to going around Europe with a "political begging bowl", arguing that the PM would not be able to reform the institution which "has an unacceptable ability to impose laws upon us" and "is against Britain's national interest."

Liam Fox accuses Cameron of going to EU with a begging bowl.PM has patronised both his Cabinet and UK citizens pic.twitter.com/fKfuahLilr

​Fox is the highest profile Conservative MP to have publicly given his support to the Brexit campaign, amid fears among some government officials that it may pave the way for other high profile MPs or cabinet members to follow suit.

'Most Tories Want to Leave'

Fox's comments come amid suggestions from Euroskeptic MPs that most of Cameron's MPs are in fact leaning towards voting for a Brexit.

The Tory Party is beginning to fall apart over Europe. The battle lines are being drawn over BREXIT with Liam Fox's desire for a free vote.

​Steve Baker, co-chair of the anti-EU Conservatives for Britain group, said that he thought more MPs were leaning towards leaving the bloc than remaining given the nature of the prime minister's reform negotiations.

Baker said that "over half of the Conservative party is strongly leaning to leave" while warning there would be "problems ahead" if the prime minister did not let party members to freely campaign on both sides of the debate.

"I think for the sake of the country, party and quality of debate it would be much better if ministers have freedom to speak their mind on the EU issue," Stebe Baker said amid suggestions of a serious party divide on the issue.

​While Cameron has not ruled out campaigning for a Brexit, he has stated that his preferred option is for Britain to remain in the EU under a reformed agreement.

Claims of Increase in British Euroskepticism

Many Euroskeptics have been highly critical of the UK's reform negotiations, arguing that Cameron has watered down demands, and that radical change is now not an option unless Britain votes to leave the bloc.

"The party is about evenly leaning each way. Looking back carefully at my canvassing, I think there might be about 130 MPs in total who might lean in favor of voting to remain. That is a minority in the Conservative party and I think that is throughout government as well," Baker said.

UK political furor. Eurosceptic Cabinet Ministers want Cameron to suspend principle of Cabinet solidarity. Will he set them free? Should he?

​There is also a suggestion that the increased Euroskepticism is having an impact on public opinion with a recent string of polls suggesting that Britons are more likely to vote for a Brexit, especially if Cameron fails to negotiate significant reforms with Brussels.