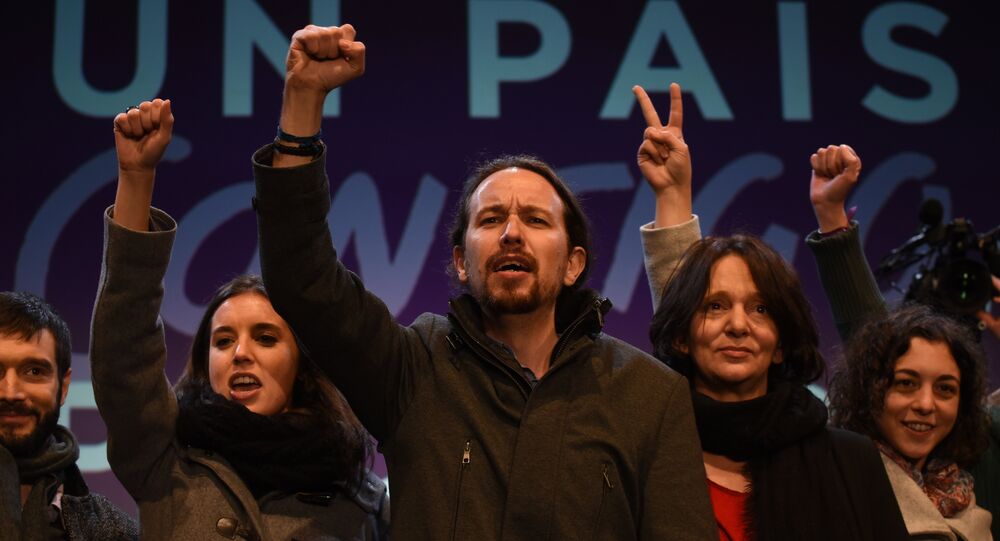 Spain is preparing for an extended period of uncertainty after political newcomers emphatically busted open the country's traditional two-party dominance in Sunday's general election. While the effects are sure to be felt in Spain, the repercussions also look set to have an impact in Brussels.

Initial analysis suggests Spain will be forced to rely on either a minority government or multi-party coalition in the fallout of the elections, with many suggesting the elections signaled a shift that will forever change the country's political landscape.

© REUTERS / Marcelo del Pozo
Spain's Ruling People's Party Wins Absolute Majority in Senate
Although the incumbent conservative party — the PP — won the election with 123 seats and 29 percent of the vote, they fell well short of a parliamentary majority, meaning that leader Mariano Rajoy must rely on the support of minor parties, if he is to continue his prime ministership.

With the public fed-up with longstanding claims of political corruption and weariness after four years of austerity, Rajoy acknowledged the political explosion that Sunday's election delivered, telling supporters in Madrid: "We're starting a period that will not be easy," adding that "it will be necessary to reach pacts and agreements and I will try to do this."

Austerity has now been politically defeated in #Spain, as well. Parties seeking to serve society made a strong showing #20D

​However, Rajoy's chances of forming a coalition seem remote after the PP's most natural ally — the centrist newcomers Cuidadanos — registered only 40 seats, leaving the mooted coalition short of a parliamentary majority of 176.

There have been suggestions that the PP could remain in power under a minority government, with Cuidadanos urging the Socialists to back Rajoy on a law-by-law basis.

Many have dismissed this as a viable option, given that the Socialists have said they will not support the PP while Rajoy remains leader.

Spain Turning to the Left?

As a result attention has turned to the left, where the Socialists and anti-austerity political newcomers Podemos, secured significant support.

The Socialists scored 90 seats, the worst result in their history, although many analysts have argued the party are ironically best placed to form government.

© Flickr / European Parliament
Podemos Party: General Elections Signify New Stage in Political History
The reason for the Socialists' optimism is due to the rise of anti-austerity party Podemos, who surprised pollsters by winning 69 seats, ensuring that they will have a big say in who governs Spain for the next four years.

​But despite the impressive results of the Podemos, the proposed Leftist coalition is also short of a parliamentary majority, triggering suggestions that Spain may follow its neighbour Portugal in forming a coalition of losers to lead the country.

Under the proposals, analysts have suggested that a left/center-left/centrist alliance between Podemos/Socialists/Cuidadanos could be formed, locking the conservative PP out of power.

​However, many believe that it would take intense negotiations to work out a deal between the groups, given the significant economic, social and constitutional differences in policy.

While it is still unclear how things will pan out in Madrid, and who will lead the country over the next four years, it seems the election will have serious repercussions for Brussels, with significant opposition to the Spain's four-year long, EU-inspired economic commitment to austerity.

While the PP has pointed to positive economic statistics to back up their claim to continue their austerity agenda, critics are less than convinced, arguing that ordinary Spanish people aren't seeing real results, with continued high levels of unemployment and unprecedented rates of emigration out of the country.

SPAIN — a week or of theatricals, then a few phone calls from Brussels and Frankfurt and from some CEOs in Madrid — and Grand Coalition,

Any continuation of austerity under a potential conservative minority government looks certain to be blocked by leftist parties, under extreme pressure from Podemos, who have campaigned on an anti-austerity agenda.

Meanwhile, an alternative economic agenda under a Leftist government or coalition of losers could easily be blocked by the PP, who hold an absolute majority in the Senate.

There are fears that Spain's elections results could lead to a new EU-rebellion, similar to movements in Greece and Portugal, that have demanded a relaxing or abolition of austerity after years of hardship, sparking a fresh challenge to Brussels' economic agenda and a further dividing of the bloc.

​Summing up events in Spain, newspaper El Pais published an editorial stating that the new system "is not a revolution but, indeed, a change of great magnitude in response to the wishes of Spaniards who, fed up with sterile confrontations in a highly polarized system, are asking for negotiation and consensus."