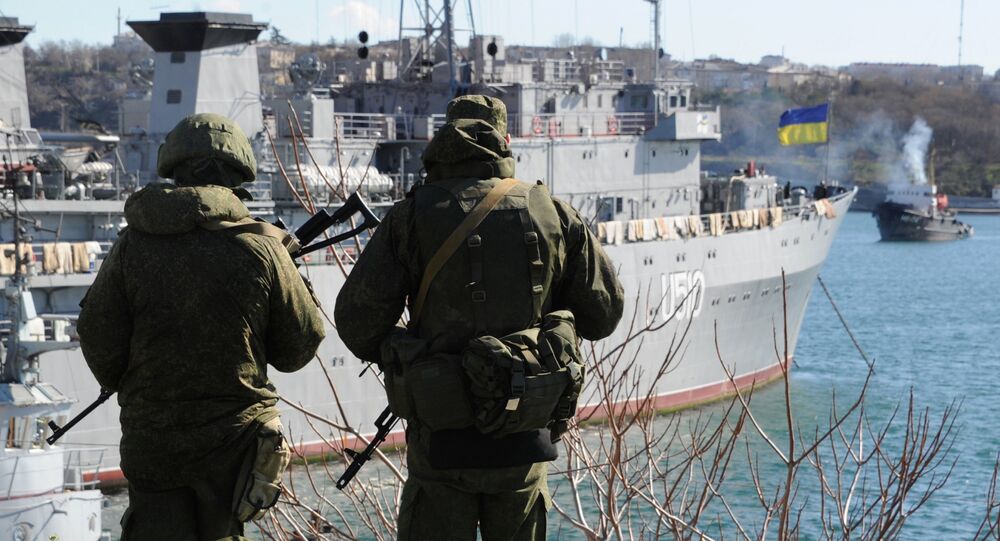 Turkish and Ukrainian media have reported that President Erdogan has met with two of the organizers of the so-called Crimean blockade. Earlier this week, another of the masterminds behind the failed 'food' and 'electricity' blockades promised that the radicals would organize a 'naval blockade'. Is a provocation imminent? What will Turkey's role be?

On Thursday, the Russian-language edition of the Turkish state-run Anadolu Agency news service unceremoniously reported that President Recep Tayyip Erdogan had met with Mustafa Dzhemilev, one of the key organizers of the so-called 'food' and 'electricity' blockades of Crimea.

Erdogan and Dzhemilev, a Ukrainian lawmaker and key figure of the Mejlis movement, which claims to represent the Crimean Tatar community, met in a hotel in the southern Turkish city of Konya, speaking for about 40 minutes, Anadolu Agency reported. Deputy Prime Minister Yalcin Akdogan was also said to be in attendance.

© AFP 2020 / ADEM ALTAN
Are Erdogan's Grey Wolves Terrorists Knocking on Crimea's Door?
According to Ukraine's QHA news service, Refat Chubarov, another of Mejlis's leaders, was also at the meeting, and that following the closed-door meeting, the Ukrainian politicians held a second working meeting, this time with Turkish Prime Minister Ahmet Davutoglu.

Interestingly, only the Russian-language version of the QHA news story took the time to explain what was discussed. According to the article, the men spoke about the emerging "strategic partnership" between Turkey and Ukraine, prospects of a free trade area, questions surrounding the "civil blockade of Crimea," and "the formation of a military unit in the Kherson region," among other issues.

Earlier this week, blockade Lenur Islyamov told Ukraine's Channel 112 Ukraina that he and his 'activists' were preparing the third wave of their efforts against Crimea, this time through a 'naval blockade' of the Kerch Strait, the body of water separating Crimea from the Krasnodar Krai. This action, Islyamov suggested, could begin as soon as the end of this month.

"I cannot tell you the details; I just want to say that we are preparing for it with all the means we have at our disposal. The soonest possible date is the end of this year, or the beginning of the next," Islyamov said, adding that "you will see how it will all happen."

YouTube/Ruptly TV
Light Up, Crimea! 'Electricity Bridge' Goes Online
Earlier, Dzhemilev outlandishly declared that a naval blockade could be organized with direct support from authorities in Kiev, or even from NATO. Suggesting that this would be "a military operation," Dzhemilev added that he could not reveal any more details, so as not to uncover any sensitive information, for example, "the exact number of Ukrainian submarines." Truth be told, the Ukrainian Navy doesn't have any submarines, their one remaining sub switching allegiance to Russia following the referendum in Crimea in 2014).

In her analysis of Islyamov and Dzhemilev's provocative declarations, Svobodnaya Pressa journalist Anna Sedova suggested while the remarks are truly ridiculous, it bears keeping in mind that the "previous stage of their campaign – the so-called 'electricity blockade', was a partial and temporary success. On November 22, 'activists' from the Right Sector and the Mejlis, in collusion with Ukrainian authorities, blew up transmission lines in the Kherson region, de-energizing the peninsula."

That situation, she noted, has since stabilized, via the energy bridge from Krasnodar, and Ukraine's restoration of the Kakhovskaya-Titan-Krasnoperekopsk transmission line, "but for a few weeks, an emergency situation was in place."

"As far as the 'naval blockade' is concerned," Sedova wrote, "who can guarantee that the so-called 'activists', for instance, will not organize a provocation involving Russian coast guard ships, especially given Islyamov's earlier declarations that the blockade would be coordinated with Turkey?"

"For their part," the journalist noted, "Crimean authorities have pointed out that Russian border guards will not stand on ceremony with offenders and, if necessary, will immediately open fire."

"Most likely," Sedova noted, "the threats from Islyamov and others are made out of their desire to attract attention. A naval blockade is simply technically unfeasible for them. Even Ukrainian analysts recognize that it would be virtually impossible to implement. That said, they do not rule out some action, such as attempts to disable communications infrastructure…or sabotage efforts against ships sailing between the strait. Therefore, despite the absurdity of their threats to implement a naval blockade, it is an issue on which it is better to be safe than to have to deal with the consequences later."

© Sputnik /
Is Kiev Using Russia-Turkey Tensions to Trouble Crimea?
Speaking to Svobodnaya Pressa, Ivan Konovalov, the director of the Moscow-based Center for the Study of Strategic Trends, emphasized that "the Kerch Strait is Russian territory. If an action is carried out there bearing the signs of a terrorist attack, it will affect Russia's relations with Ukraine. I think Kiev is well aware of this. If some deranged lunatics want to provoke a conflict between Russia and Ukraine, it will be in Kiev's interest not to allow this to happen. If Islyamov's declarations should scare anyone, it is Kiev."

For its part, Konovalov explained, "the Russian FSB Border Service has the resources to quickly respond to any action or provocation. It's worth recalling the recent events surrounding the Chornomornaftohaz oil rig, approached by a Ukrainian vessel. A Russian border patrol boat was quickly sent to the area, and the situation was resolved. There have been many similar threats and foolish declarations since the coup-d'état in Ukraine, and I don't think there's anything behind them."

Furthermore, the threat of a naval blockade cannot be compared with last month's 'electricity blockade', according to the analyst, since there, "the power lines were on Ukrainian territory." As far as the Kerch Strait is concerned, "the situation is very different. On their territory, they can do whatever they want, but on Russian territory any provocateurs will be quickly rebuffed, and the reaction will be extremely harsh."

"A blockade in the classical understanding requires serious power. To block the Kerch Strait, it would be necessary to have naval and air forces. Those who are talking about 'a blockade of Crimea' have neither. If we speak about a provocation, they do not need such technical possibilities. But if some sabotage does take place in the Kerch Strait, it will be immediately obvious who is behind it. In this case, not only Russia, but also the international community would react. At the moment, the world community's attitude toward terrorist attacks is totally unambiguous: they are not acceptable under any circumstances. If an incident occurs, it will only discredit Ukraine's leadership in the eyes of the West."

© Sputnik / Mihail Mokrushin
Asking for It: Rogue Crimean Tatar Leaders Deliberately Antagonize Russia
Andrei Manoilo, Moscow State University Professor and member of the Russian Security Council, told Svobodnaya Pressa that there is little the activists can do on their own, but added that he cannot exclude the possibility that more serious players could be behind the Mejlis.

The activists' declarations, according to Manoilo, "are a sort of advertising campaign for Crimean Tatar extremists. These groups are closely linked with Turkish intelligence…who provide them with significant funding for their provocations. The so-called Mejlis of the Crimean Tatar people ceased representing the interests of the Crimean Tatars after the peninsula's accession to Russia. This organization, in fact, has evolved from a political group into a diversionary force, operating under the auspices of Turkish secret services. These services may well use the group for provocations against Russia."

The analyst agreed with Konovalov's assessment on the extremists' inability to organize a naval blockade, noting that "even with the support of Ukrainian radical organizations, it is extremely unlikely. In order to carry out a blockade of Crimea from the sea even for a day, they would need a powerful strike force of warships of all classes, not three motor boats and five rubber dinghies. Moreover, this group would have to be covered by shore-based naval aviation. Ukraine does not have such forces."

"NATO," Manoilo notes, "has such forces, but the alliance will not go along with such a provocation. Perhaps some extremist circles in Ukraine hope that they will start the blockade, and NATO will come to support them, but this simply cannot happen. Russia has a powerful military grouping on the Black Sea," not to mention its forces stationed in Crimea. "It would require all the forces of NATO put together; Turkey certainly would not be capable of organizing such an operation on their own, either."

Ultimately, the expert suggests that "the goal of these provocative statements is to trigger a reaction from Russia. This will allow the extremists to say that Russia is forced to react to them, which gives them some weight." Nonetheless, he also notes that "if the statements are coming from representatives of the Crimean Tatar nationalists in Ukraine, it is not an independent move. They are giving voice to a message which comes from Washington through Kiev, from Kiev itself, or from Ankara. It cannot be excluded that Ankara is trying to tickle the Russian side, hinting at some complication. But this is a pure provocation."