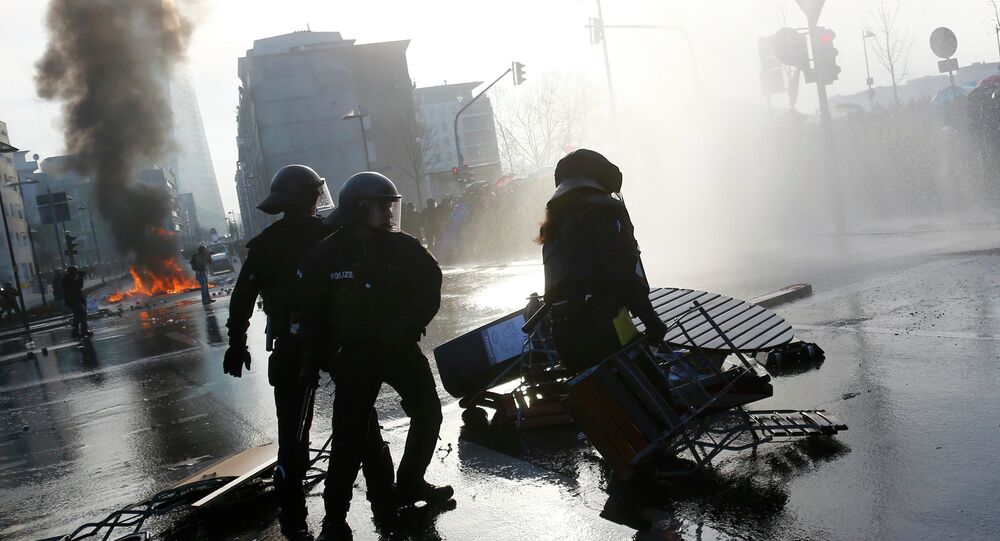 The majority of German poll respondents said they are fearful about the coming year, almost double the amount from last year's survey.

© AFP 2020 / DPA / CARMEN JASPERSEN
Islamic Preacher Arrested in Germany on Suspicion of Supporting Terrorists
The proportion of Germans who are fearful about the future has almost doubled in a year as a result of recent events, according to the results of a new survey.

The poll, carried out by the German market research institute GfK on behalf of the Hamburg BAT Foundation for Future Studies, found that 55 percent of Germans are fearful about the coming year, up from 31 percent last year, and 28 percent in 2013.

The BAT Foundation's Scientific Head, Dr. Ulrich Reinhardt, told Fokus.de that the results show a return of "German angst" about a negative future, as a result of the recent influx of refugees and terrorist attacks in Europe.

"The current humanitarian crisis and growing fear of terrorist attacks has deeply unsettled the population and made them doubt a positive future," said Reinhardt.

Older people were more likely to be fearful about next year; 64 percent of respondents over the age of 55 said they look to the future with fear.

© Sputnik / Eduard Pesov
German Press Remarks on Success of Moscow Meetings
Among those aged 14 to 34, 42 percent agreed they were fearful about the future. In 2013, that proportion was just 19 percent.

The future of the economy was the greatest cause for concern, with 79 percent saying they believe Germany's economic problems will get worse, an increase from 66 percent in 2014 and 59 percent in 2013. Those aged 35 to 54 were most pessimistic about the economy: 83 percent of them think the economy will worsen.

"The working population in particular expects additional burdens, and fear not being able to maintain their standard of living," explained Reinhardt, who predicts a decrease in consumer spending and an increase in savings as a result.

The survey also found that 70 percent of Germans expect the European Union to drift further apart, an increase from 60 percent in 2014. They attributed this expectation to the refugee crisis and Eurozone crisis.

The researchers linked the finding to the results of elections in the rest of Europe this year, which have resulted in gains for parties from the right wing of the political spectrum.

"The right-wing trend in elections in Poland, France, Hungary, Austria, Sweden, Great Britain, Denmark and Switzerland shows great uncertainty across all of Europe. People's fears about their own prosperity, about their national interest and foreign infiltration are at the forefront," said Reinhardt.

A Boon for Germany's Therapists?