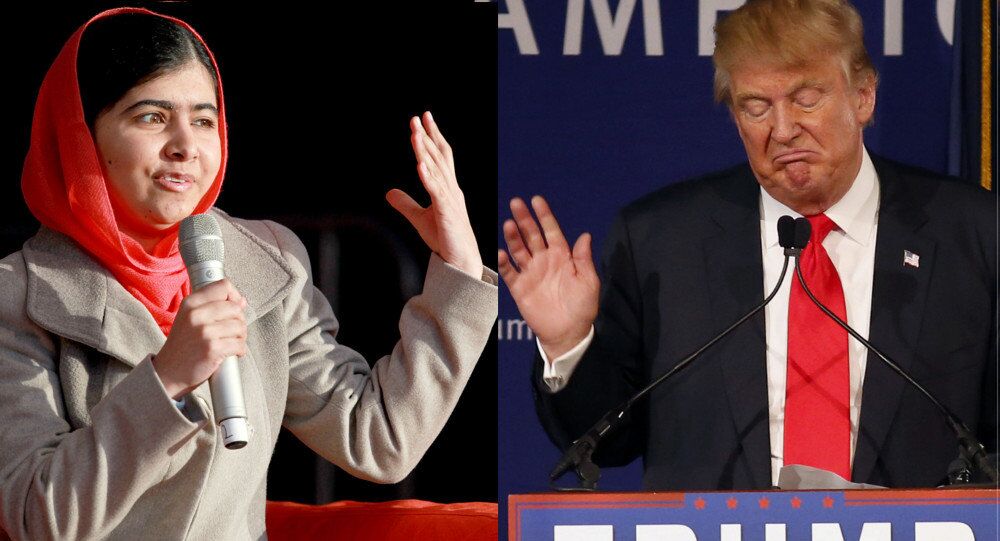 The attempted murder of Malala Yousafzai by Taliban terrorists as she boarded a school bus in Pakistan, thrust the young woman's fight for her life - at the expense of her quest for education - onto the international stage.

© REUTERS / Mike Stone
Top Neo-Nazi Website Celebrates Anti-Muslim Ban Proposed by ‘Glorious Leader’ Donald Trump
The 18-year-old campaigner and Nobel Peace Prize winner now lives in Birmingham in England. Malala, who fights for young girls to have access to education around the world, has joined the debate over the controversial call made by US Republican Presidential candidate Donald Trump for the US to ban all Muslims.

Joining in with the widespread condemnation of Trump and his choice of words, Malala Yousafzai says he is "full of hatred", with rhetoric fit to encourage the radicalization of more terrorists.

Speaking ahead of an event in Birmingham to mark the massacre of 150 teachers and children at a school in Peshawar a year ago, Malala told AFP that Trump's comments were "tragic" and "full of this ideology of being discriminative towards others."

Malala is a Nobel Prize laureate—and a Trump administration would deny her entry to the US: https://t.co/clOhYjCziW pic.twitter.com/y5mYP1Vf19

Malala expressed the importance for politicians to think before they speak; not something Donald Trump would recognize.

"It's important that whatever politicians say, whatever the media say, they should be really, really careful about it. If your intention is to stop terrorism, do not try to blame the whole population of Muslims for it because it cannot stop terrorism. It will radicalize more terrorists," Malala told the Press Association.

A victim of terrorism, Malala exudes determination and can already claim victory after more than a million people signed up to her campaign for world leaders to commit to providing 12 years of free, safe and quality primary and secondary education for every girl and every boy as part of the new United Nations Sustainable Development Goals. A legacy to be proud of.

Trump on the other hand, has become the man known for his 'potty' mouth, as well as spreading racism, hatred and misogyny.

Trump petition UK now at 500.912 and counting highest ever no on petition UK Government #BanTrump https://t.co/AQI24IEeay

Therefore, more than half a million people have signed a petition calling for the British government to ban the US presidential candidate from entering the UK on hate speech grounds. Almost 561,000 people have put their name to the campaign, hoping that he never mounts a stage in the UK.

Malala Yousafzay: “Each Prize Gives Me Courage in My Struggle for Women’s Rights”