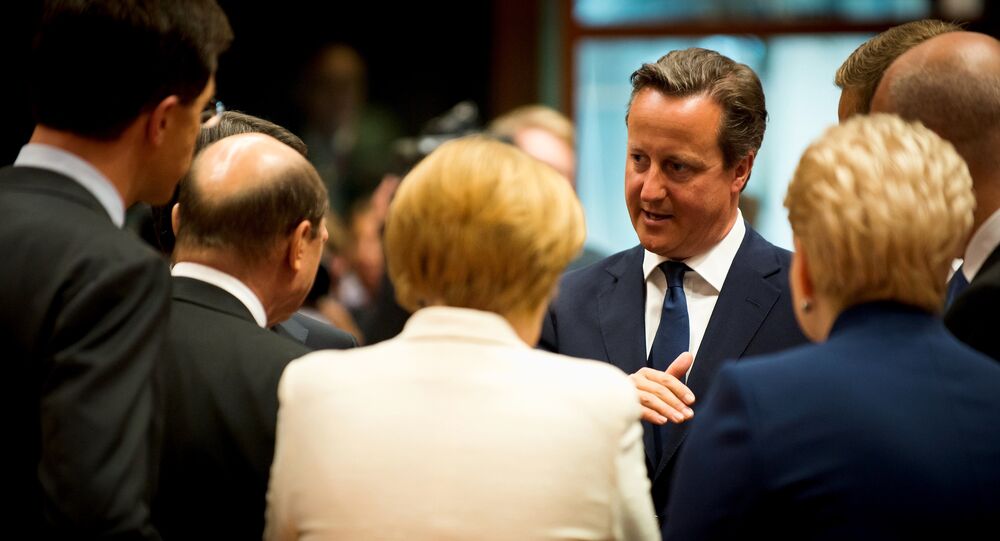 UK Prime Minister flies into Brussels Wednesday to begin the latest round of talks on Britain's membership of the European Union and EU reform, in what historians see as just the latest in a long series of tussles with Europe.

© Flickr / PROChris Goldberg
UK Lawmakers Derail Cameron's EU Referendum Plans
Cameron will not be the first UK prime minister to go to the EU and fight for opt-outs from major planks of the European Union. Former Prime Minister John Major — who, like Cameron, led a party bitterly divided over Europe — negotiated an opt-out from the Schengen borderless Europe agreement and also rejected joining the Eurozone.

Major managed to get his European counterparts to agree that the UK could maintain border controls and passport checks, instead of joining other states in setting up Schengen. The borderless zone has been found wanting in recent months because the refugee crisis has exposed severe weaknesses in the external borders of Schengen, with the EU now rushing to shore up its borders and establish a new 'super border force' to beef up security.

Major also persuaded Europe that Britain would not join an economic and monetary union, under the Maastricht treaty, retaining the pound and remaining outside the single European currency. Many in the UK will see that decision as having been prescient, given the current crisis in the Eurozone, with Greece on its third bailout and Spain, Portugal and Ireland all having struggled in recent years.

Will Cameron achieve his goals & get a good deal for Britain from the #EU? https://t.co/kPQJHgLGEk #EURef pic.twitter.com/IRD2MLZVFa

Speaking to the BBC, Wednesday, however, Major said it would be "dangerous" for Britain to leave the EU and live in "splendid isolation."

"We are better off, we are safer, we are going to be more prosperous in, rather than out, and flirting with leaving is dangerous. If we left, there must be a high probability that Scotland would have another referendum and leave the United Kingdom. The United Kingdom would be fractured, that would be very damaging. Our international prestige would suffer," Major said.

As Cameron follows in his footsteps and prepares for difficult talks with his European counterparts, Major left him in no doubt as to his feelings.

John Major: Outcome of renegotiation "shouldn’t decide whether we remain inside the EU". https://t.co/KHpAEZ7WBA pic.twitter.com/AatInfrb7b

"There is a lot of frustration with the European Union at the moment, and much of that frustration is entirely justified. I don't think there's any doubt about that, I share the frustration that many people have.

"But when the UK is truly engaged and people look at the long-term implications of where Britain would be were it not in the European Union, and examine and understand what it would mean for our future and our children's future and grandchildren's future, then I think people will move back to realizing that in a world that is interconnected as we are, in a world that is moving together as we are, that we are better off and safer inside the EU rather than outside," said Major.