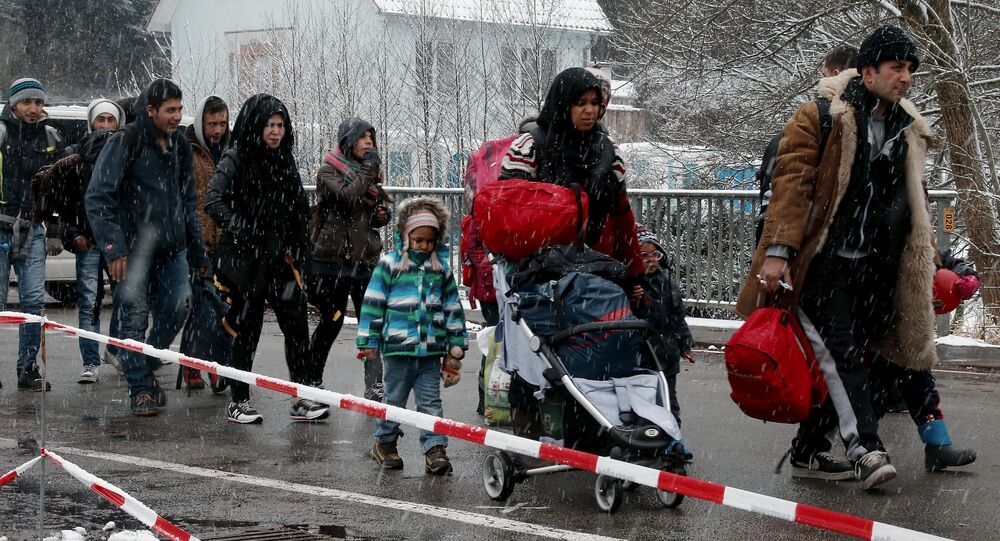 © REUTERS / Michael Dalder
Austria Borders on Rebellion Over Refugee Crisis
Citing a perceived lack of security, the fear of deportation, abuse, and homesickness, refugees who fled from Afghanistan, Iraq and Kosovo are reluctant to stay in Austria.

Some months have passed since Austrian citizens marched in a pro-refugee rally, welcoming asylum seekers fleeing conflict and poverty in their home countries. Now the same refugees complain of a lack of food and clothes, and that the expected shorter asylum process from Austrian authorities has not taken place as promised.

Data provided by the Austrian Interior Ministry show that since January over 1,100 Kosovans have returned home of their own volition as hopes that they would obtain refugee status in Austria were dashed.

Unlike Kosovans, refugees from Afghanistan and Iraq have better chances to receive asylum. Some 530 Iraqi and 120 Afghani migrants have been documented as having left Austria. "This trend has become more noticeable since mid-September," Interior Ministry spokesman Karl-Heinz Grundböck said.

According to the Caritas charity, 257 displaced persons from Iraq, 35 from Afghanistan and 53 Iranians returned to their countries of origin from September 1st through December 14 in 2015 compared to 2 Iraqis, 9 Afghans and 1 Iranian last year.

"Many are afraid of being deported and the humiliation of that," Caritas spokesman Martin Gantner said. He added that others are returning because they miss their families, and some had different expectations of what Austria and Europe would be like. "There are so many uncertainties for them here in Austria, many refugees are traumatized and need a sense of security," he said.

Three 20-year-old computer engineers from Iraq living in a refugee house in Vienna gave an interview to the local Kurier newspaper regarding their plan to return home on Wednesday following a 90-day "detention" in Austria.

Explaining his reasoning for the return, Muqdad, one of the men, said, "we wanted peace, freedom and a future."

"We've just been humiliated here," said Omer. "It was a mistake to come. People look at us here as if we were terrorists, and all we want is peace. Dogs are treated better than refugees in Austria — at least they have something good to eat, and are even given something to wear."

The refugees' decision has been financially supported by the EU and the Austrian Interior Ministry. The Iraqi and Afghan embassies in Austria's capital confirmed that they have launched a return procedure to issue travel documents for migrants who failed to find asylum in Austria.

"Many Iraqis say that they expected better social care here, and many also had a misleading idea of how long the asylum process might take. They didn't realize that they might have to wait a year or more until their families could join them here."

Despite repeated statements by Austrian Chancellor Werner Faymann of his country's "humanitarian imperative" to accept refugees ejected from Hungary, Vienna has demonstrated a less than welcoming policy toward asylum seekers. The number of refugees leaving Austria within the last month has skyrocketed dramatically.

"Asylum is something time-limited," the Austrian newspaper Der Standard quoted Faymann as saying.

Last month, the Austrian chancellor, who had previously promised not to construct new border fences, announced a new 2.3 mile fence to be built at an Austrian- Slovenian border.