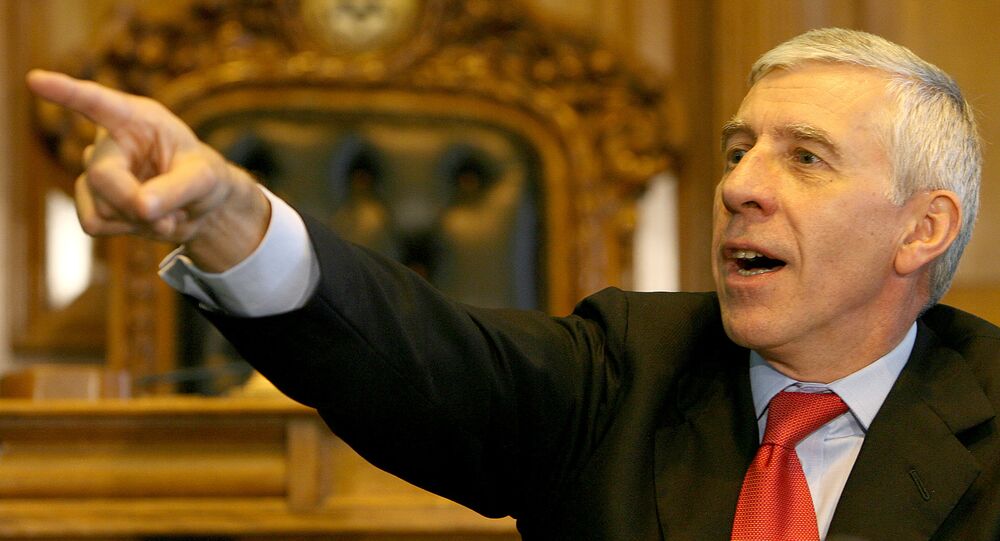 As debate rages on about former British Prime Minister Tony Blair's knowledge of alleged UK complicity in the US' post 9/11 rendition and torture program, former Foreign Secretary Jack Straw has been accused of trying to "re-write history" over his knowledge or British involvement in the scheme.

© AP Photo / Kirsty Wigglesworth
Tony Blair and UK Intel Officials Knew of Guantanamo Torture - Shaker Aamer
Following the release of British resident Shaker Aamer from Guantanamo Bay after being held for 14 years without charge, there has been a recent push for former top British government officials to come clean on what they knew about Washington's rendition amid claims of alleged complicity.

In response to the allegations, Straw, who served as foreign secretary in Tony Blair's government between 2001 and 2006, said "the British government never condoned, nor was complicit, in the torture or ill-treatment of detainees, wherever they were held."

However, critics have claimed that Straw's comments contradict a range of evidence such as MI6 correspondence, High Court rulings and even admissions from members of his own Labour party.

Heart-breaking letters Johina Aamer sent to Jack Straw aged 7 in 2004. Wonder did they tug at his (guilty?) heart? pic.twitter.com/OQPSyUrGdJ

'The Intelligence Was British'

Citing documents found in Libya after the fall of former leader Muammar Gaddafi, human rights activist group Reprieve claims that a British intelligence agent from MI6 took credit for a CIA operation which saw a Libyan government critic and his pregnant wife kidnapped, tortured and flown to a Libyan prison in 2004.

According to the documents, the then-director of counter-terrorism at MI6, Sir Mark Allen, sent a letter to Libyan spy chief Moussa Koussa saying that "the intelligence… was British" in reference to the abduction of Abdul-hakim Belhadj and his wife Fatima Boudchar.

"This was the least we could do for you and for Libya to demonstrate the remarkable relationship we have built over the years. I am so glad," Sir Mark Allen added.

Straw has subsequently been implicated in the case due to the fact he was foreign secretary at the time, which made him responsible for MI6. Metropolitan police have passed information on to the Crown Prosecution Service to decide whether charges should be laid over the matter.

Additional evidence also appears to be at odds with Straw's comments that the UK wasn't complicit in rendition and torture.

A 2009 High Court ruling into the case of Binyam Mohaamed, who was tortured in a CIA prison in Morocco, found that:

"…the relationship of the United Kingdom government to the United States authorities in connection with Binyam Mohamed was far beyond that of a bystander or witness to the alleged wrongdoing."

However, perhaps most damning for Straw's claims of the UK never condoning or being involved in the US rendition program, is the testimony of two former cabinet colleagues, who admitted that British personnel and territory had been involved in the controversial post 9/11 torture program.

In 2008, then Foreign Secretary David Miliband admitted to the UK House of Commons that CIA rendition flights, carrying terror suspects, had used the remote British Indian Ocean territory of Diego Garcia for stopovers on two occasions in 2002.

This was exacerbated in 2009, when then Defense Secretary John Hutton apologized and admitted that Britain had in 2004 taken part in the rendition of terror suspects to a prison in Afghanistan where they faced torture.

Cori Crider, director at Reprieve urged Mr Straw to come clean on his knowledge of British complicity in US rendition and torture.

"Mr Straw's claims seem to be an attempt to re-write history. We already know that Britain was complicit in the US torture program — the only questions remaining are how far this went, who knew about it, and who signed it off. As the minister responsible for MI6 when it helped render a pregnant woman and four young children to Gaddafi's prisons, maybe Mr Straw could start giving us some answers," said Crider.