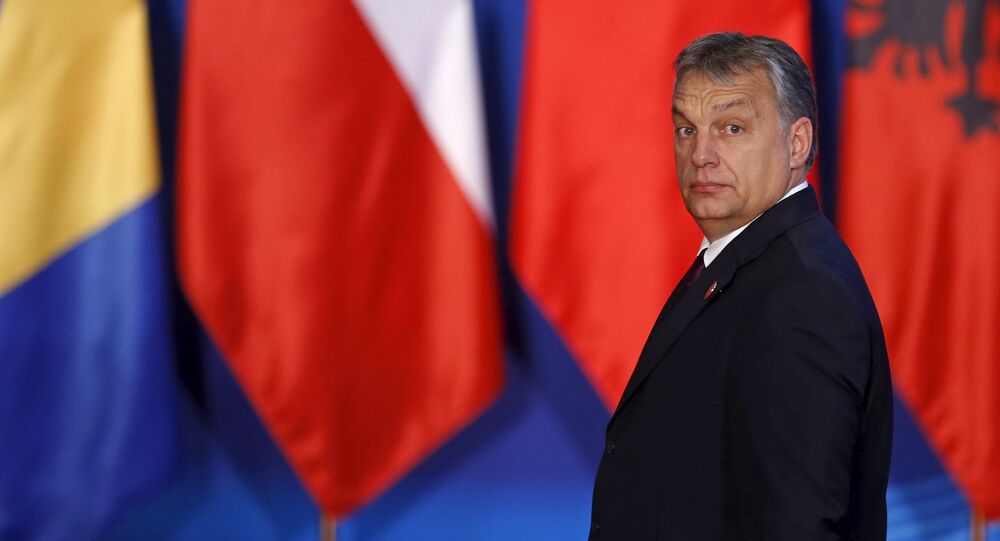 Hungary's Prime Minister Viktor Orban has slammed European Union leaders who are against his call to prevent refugees from entering the bloc, calling them "weak, unsure and powerless" saying the "continent looks like a battlefield."

© AP Photo / Darko Bandic
Number of Asylum Seekers in EU Doubles, More Than Half Head to Hungary
Orban — who has announced he is running for a third time as PM in 2018 and is keen to build on anti-immigration sentiment — has been a strong opponent of the open doors policy, espoused by German Chancellor Angela Merkel.

The Hungarian PM has been a strong opponent of calls for a EU quota system to relocate refugees arriving in Europe to each member state under a formula based on population and economic factors.

Hungary has joined Slovakia in taking the EU to the European Court of Justice in Luxembourg over the proposed mandatory quota mechanism which would see Hungary forced to admit 2,300 and Slovakia 800 refugees.

"The continent looks like a battlefield and the worse is yet to come. How many more will hit the road, heading for Europe? I believe it's millions, or tens of millions," Orban told his party's conference."

He said the bloc was being "invaded" by migrants:

"We will protect our borders (and) Hungarian people from criminals, terrorists (and) illegal immigrants."

He also took a swipe at some of the pillars of the EU, saying there needed to be a return to common sense and national pride. "[Europe and] its people today believe in superficial and secondary things: in human rights, progress, openness, new kinds of families, tolerance," Orban said. "These are nice and sweet things, but essentially, they are secondary," he told the conference.

© AFP 2020 / ATTILA KISBENEDEK
Directed by Hungarian police officers, migrants make their way through the countryside after they crossed the Hungarian-Croatian border near the village of Zakany in Hungary to continue their trip north on September 21, 2015.

There is a deep division within Europe over the refugee crisis, with some countries blaming Germany and Sweden for having precipitated the mass movement of people by declaring their door open to refugees from Syria and other war-torn countries.

In mid-November, the European Commission conceded: "The measures proposed by the Commission and adopted by the Council [in September] to relocate 160,000 people in clear need of international protection will allow for a significant, if partial, reduction of the pressure on the most affected Member States."

However, it conceded that — so far — only just under 200 people have been relocated under the scheme, with many member states either refusing to take them in, or slowing down the process of admitting them.