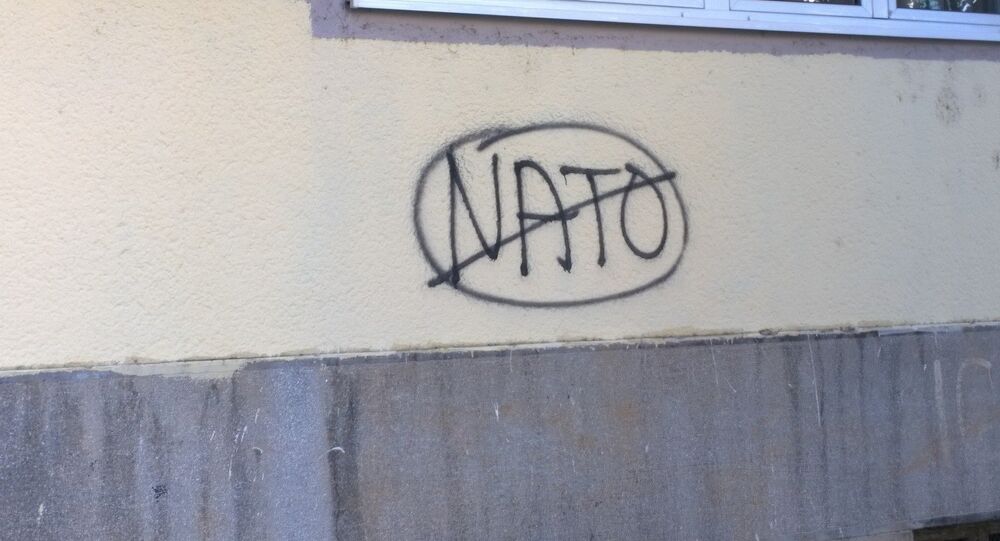 Montenegrin opposition parties will hold a protest march on Saturday in Podgorica against NATO's invitation to Montenegro, warning that NATO membership will only cause conflict for society there.

© AFP 2020 / SAVO PRELEVIC
Montenegro's Accession to NATO to Destabilize Regional Security - Envoy
Montenegro's opposition parties will gather on Saturday December 12 in the Montenegrin capital of Podgorica to protest NATO's invitation to the country to join the military alliance.

On Friday, the leader of the Democratic People's Party (DNP) Milan Knezevic warned that NATO membership will worsen social divisions in Montenegro and called on the government to hold a referendum on the issue.

"The DNP calls on all members and sympathizers, free-thinking citizens, to come to a big anti-NATO gathering at which once again we will announce the position that Montenegro must remain militarily neutral, and that eventual membership of this aggressive military alliance will further deepen existing divides, particularly if the decision is taken without any consultation with citizens."

Knezevic also said the government should reverse its decision to join sanctions against Russia, after having imposed them last year in line with EU policy.

"That would mean the beginning of warming up onerous internal relations, both in Montenegrin politics and in society … for Montenegro at this time, alignment on any side is economically, socially and civilizationally disastrous."

© AP Photo / Risto Bozovic
Montenegrin police officers are engulfed in smoke and flames as opposition supporters hurled torches on them during a protest in front of the Parliament building in Podgorica, Montenegro Saturday, Oct. 24, 2015. Police fired tear gas at opposition supporters who hurled fire bombs and torches to demand the resignation Prime Minister Milo Djukanovic's government which hopes to steer the Balkan country toward NATO membership later this year
The protest is also organized by Montenegro's New Serb Democracy Party (NOVA). Its President Andrija Mandic told Sputnik Serbia that a recent comment from Montenegrin president Filip Vujanovic is proof of his misguided view of Montenegro's history and geopolitical status, which threatens to open social divisions.

Earlier this month Vujanovic told Montenegrin television that NATO membership gives Montenegro a guarantee of territorial and sovereign integrity. The alliance of Serbia and Montenegro was dissolved peacefully in 2006 following a referendum in which 55 percent of Montenegrins voted for independence.

© AP Photo / Dimitri Messinis
Say No to NATO, They Owe Us Blood – Former Montenegrin President
According to the Montenegrin president, if NATO had existed in 1918, the Kingdom of Montenegro would have continued to be an independent state instead of becoming a part of the Kingdom of Serbs, Croats and Slovenes when the empires that had ruled the region collapsed at the end of the First World War.

"If they (the current government) followed the desire and recommendations of those who founded Montenegro we would never need to distance ourselves from our historical allies, who have been together with us for centuries, who protected Montenegro and cared about her future, because only good historical alliances give assurances for the future," said Mandic.

"This experiment and marionette of Montenegrin authority which is pushing us into the embrace of 28 NATO countries, which pushes us into an alliance with, for example, Albania and Turkey, essentially against Serbia and against Russia, is not the choice or our ancestors, not our choice, and probably not the choice of our descendants."

When Stoltenberg visited Podgorica in October to discuss the invitation with Montenegro's president, foreign minister and defense minister, hundreds of protestors gathered on the street outside to protest. They shouted slogans including "Kosovo is Serbia," "This is not a NATO country," and "NATO killers, you have blood on your hands.