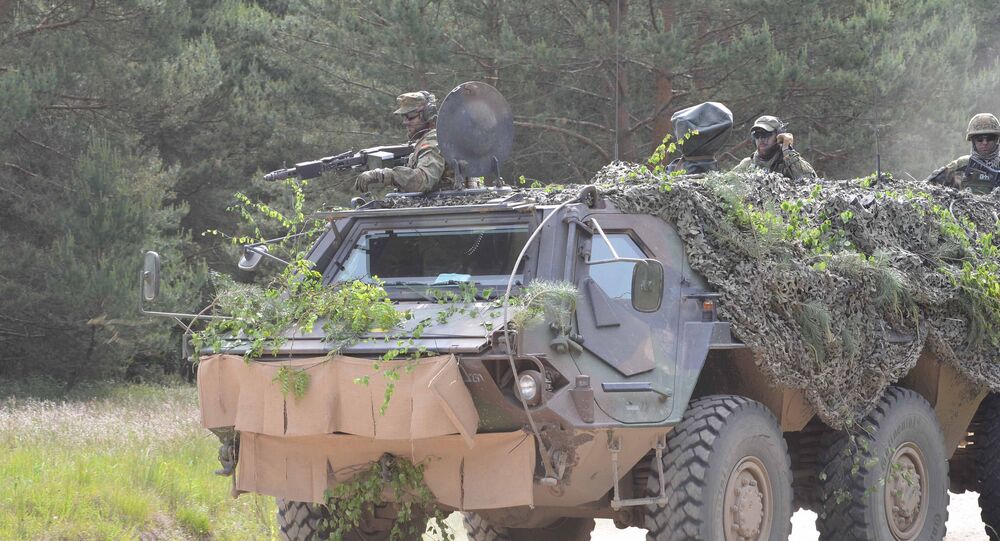 In response to what Washington insists is Russia’s aggression in Ukraine, the US Army has confirmed that it intends to establish a number of equipment caches across the European continent.

Throughout the Ukraine crisis, Washington has painted Moscow as an aggressor, a phantom presence in the conflict zone which the Pentagon could use to justify more military spending.

This has, for the most part, worked. The US Army has established a number of maintenance sites across Europe, known as European Activity Sets, where heavy equipment can be stored. Sites in Lithuania, Romania, and Bulgaria are already complete, with equipment on the way, while more will be established by the end of next year.

"By September 2016, forward-deployed equipment is going to be left behind in Lithuania, Romania, and Bulgaria," Lt. Gen. Ben Hodges, commander of the US Army Europe, said during a Pentagon briefing on Wednesday.

"The remainder will be complete over the course of the coming year."

The 1st Brigade, 3rd Division will leave its equipment at the completed maintenance sites when it completes its current rotation. Those additional sites will be in Estonia, Latvia, and Poland. Once the next brigade arrives in April, it will up the equipment, and transport it to the new sites.

Hodges also says an additional maintenance site could also be built in Hungary in 2017.

These sets are intended to provide specialized equipment necessary for regional combat operations. In this case, that regional concern is so-called Russian aggression. In the wake of the reunification of Crimea, a decision which was the result of a referendum in which over 96% of voters supported the motion, the US Army deployed equipment caches to Europe immediately.

These were used in joint training sessions with France, Latvia, and Germany.

Beyond the maintenance sites currently being discussed, Hodges said the Army has no plans to increase the number of activity sets on the continent.

He did stress, however, that the Army National Guard may be allowed to store its own, separate equipment at the sites. Hodges also indicated that he’s open to the possibility of storing more prepositioned stocks in Europe, which is, technically, separate from activity sets.

"We are looking at places for that too but I don’t have a formal decision on that," he said, according to Defense News.

All of this is in addition to the personnel and equipment the Pentagon has sent to Kiev. Roughly 400 US soldiers are currently training fighters in Ukraine, with the ultimate goal of creating five Ministry of Defense battalions. Last month, Washington also deployed two Q-36 Firefinder radar systems to Kiev.