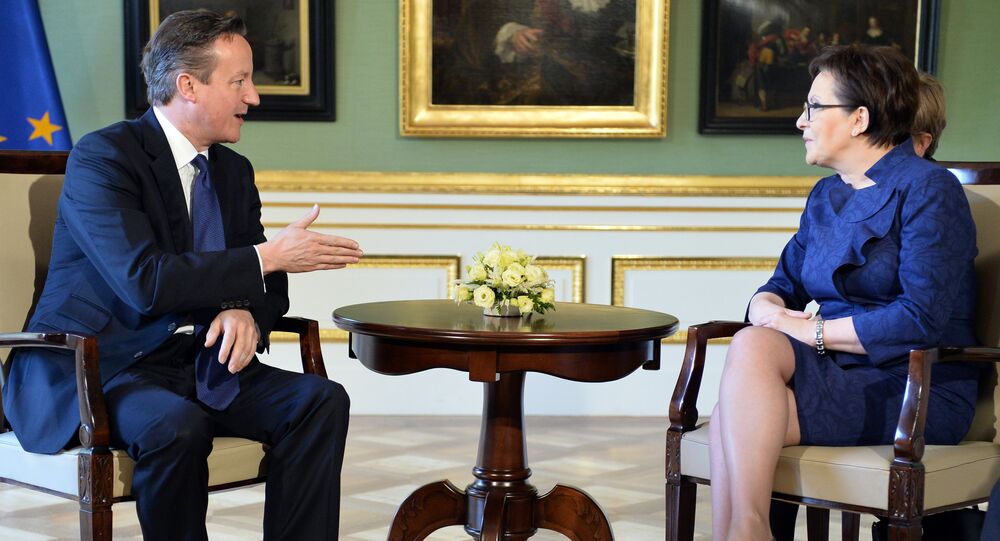 UK Prime Minister David Cameron has played down deep divisions on British demands for welfare reforms for EU migrants, during a crucial meeting with Polish Prime Minister Beata Szydlo over Britain's membership of the European Union.

Cameron was quick to acknowledge the deep relationship between the UK and Poland — in particular, the important role Polish forces played with the UK in the Second World War. However, the two countries remain apart on the crucial demand by London that EU migrants — including Poles — should not be able to claim in-work benefits or social housing for four years.

"The British demand for 'four years' is really very difficult for the Poles, and they will want to make Cameron clear on that score. The Poles are clear; they will not be humiliated or victimized over this," a source close to the talks in Warsaw told reporters.

Szydlo told Cameron that Poland did not see "eye to eye" with Britain over the matter and that the free movement of people is a fundamental principle of the EU and is not up for discussion. It will be a blow for Cameron, who was hoping the newly elected Conservative Government in Warsaw would be swayed toward his own Conservative Party view.

Poland & UK dont see 'eye to eye' on benefits for migrants. Wonder why? There is one British person claiming unemployment benefit in Poland

​Cameron played down the rift, saying:

"The relationship between the United Kingdom and Poland matters — it matters for our prosperity and for our security. It always has. It always will. People in Britain never forget how brave Polish pilots played such a critical role in standing up for freedom and in fighting fascism."

Cameron was keen to emphasis the importance of the London-Warsaw relationship. "Partners in trade — the UK is Poland's second largest trading partner and British companies invested over 3 billion euros here last year.

"Partners in defense — as fellow NATO members, we are steadfastly committed to the security of our allies. And as partners in the EU — it is great to see a sister party in the European Conservatives and Reformists Group back in power," Cameron said.

However, Cameron admitted the talks on welfare had not gone smoothly. "Even on the most difficult issue of welfare, we have agreed to work together to find a solution. I support the principle of free movement and I greatly value the contribution that many Poles and other Europeans make to Britain.

"The challenge is the scale of the vast movement of people we have seen across Europe over the last decade and the pressure that can put on public services. That is the problem we need to address and I believe with the type of political will I have seen here in Poland we can find a way," he said.

Cameron is continuing his tour of Europe ahead of the leaders' summit on December 17/18, when he will attempt to reach consensus on reforms to Britain's membership of the EU, before calling an In/Out referendum before the end of 2017.