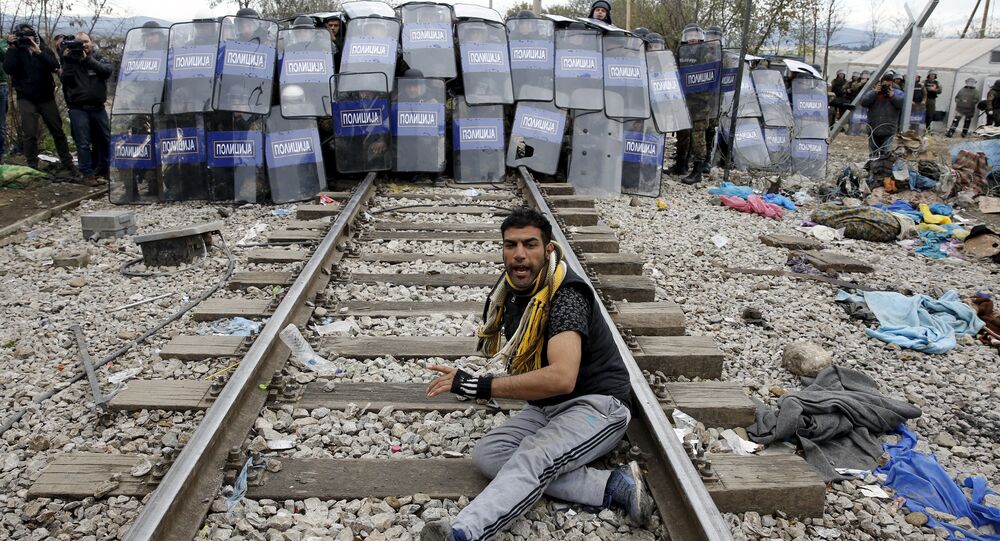 Macedonia has found itself at the forefront of policing EU borders while not even being a member of the club.

More than half a million migrants and refugees have passed through the poor Balkans country this year to a promise of a better life in wealthy Northern Europe.

© AP Photo / Visar Kryeziu
A migrant is child carried into Macedonia, near the southern Macedonian town of Gevgelija, Friday, Dec. 4, 2015.

The main transit point up to now has been the border checkpoint 59, near the town of Gevgelija, on the only rail link with Greece — the EU entry point for most migrants.

Hardly any of them stayed in Macedonia, swiftly moving on to their preferred destination of Serbia, Croatia, Slovenia and Austria, as well as Germany or Scandinavia.

All of a sudden, the gate was slammed closed. After EU countries further north from the Balkans decided to admit only people from designated war zones — Syria, Afghanistan and Iraq — fences started to pop up along the EU perimeter.

Austria, who until recently had an open door policy, has begun installing a 3.7 km long fence at a border crossing with Slovenia, which is expected to be finished before Christmas.

Macedonia who has been an EU hopeful since 2005 without any tangible progress, has been left with thousands of stranded migrants.

The situation has especially escalated on Macedonia's border with Greece where migrants scuffle and argue with police officers who are blocking them from crossing the border.

President Gjorge Ivanov has sharply criticized the European Union and Greece for alack of financial support and data sharing. Ivanov said Macedonia can shelter no more than 2,000 economic migrants in temporary transit centers.

"Any increase in these numbers will increase permanent and direct threats and risks for the national security of Macedonia," Ivanov told The Associated Press.

"The risk of possible conflict between refugees and migrants, migrants and police and army, or between migrants and local people is high."

Thousands of excluded migrants from Algeria, Tunisia, Lebanon, Morocco, Yemen, Iran, Pakistan, Bangladesh, Somalia and the Congo have been crowding outside the checkpoint, angrily demanding entry, whilst also blocking rail freight services and periodically preventing refugees from reaching the crossing.

Now, Macedonia is building a three-meter high fence along its southern border with Greece. So far, the army has erected 5 kilometers of the fence that will eventually stretch for up to 40 kilometers.

"In spite of the promises, Macedonia has not received any financial or technical assistance from the European Union regarding this migrant and refugee crisis," Ivanov said, saying his country has spent more than 10 million euros on migrant-related security alone.

"Macedonia cannot be the only defender of the EU boundaries," he added.

© AFP 2020
Frontex Urges to Send Border Guards to Deal With Migrants Coming to Greece
Macedonia applied for EU membership back in the spring of 2004. It took the European Commission eight years to start a High-Level Accession Dialogue with Skopje. Yet the European Council is yet to consider the issue of whether to open negotiations on accession. In the meantime, Macedonia is forced to bear the brunt of a flawed EU policy on migration.

"The problem is that no one in Europe at the moment has willingness to openly say what (EU) policy is," he said.

At Least 18 Macedonian Policemen Injured in Clashes With Migrants