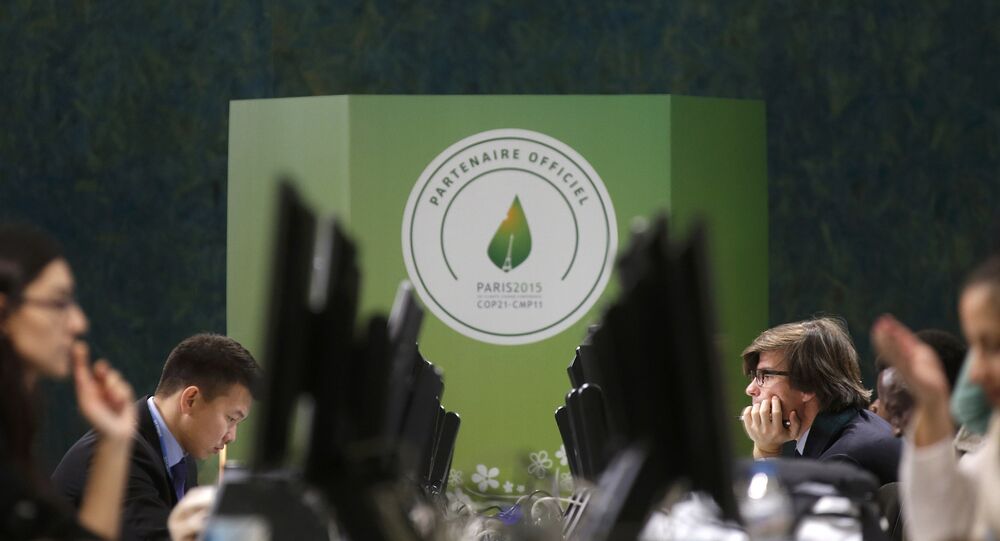 Political temperatures rise in Paris as the ministers of trade and environment from almost 200 countries that are parties to the United Nations Framework Convention on Climate Change (UNFCCC) are set to review on Monday the draft agreement, which aims to keep the global warming below 2 degrees Celsius.

PARIS (Sputnik) – The text which was amended during the first week of the 21st Conference of the Parties (COP21) is still a tough nut to crack with more brackets that wording. Yet it was significantly slimmed down to just 21 pages against a 300-page document debated in Copenhagen at COP15 in 2009.

According to Greenpeace Head of International Climate Politics Martin Kaiser, "the atmosphere remains constructive. But that doesn't guarantee a decent deal."

He added that the oil-producing nations and fossil fuel industry were very likely to attempt to derail the talks under the ministerial segment.

The text itself shows no consensus neither on financial issues (who and how should bear main responsibility and provide financial resources to combat climate change), nor on mechanisms of mitigation and adaptation to climate change catastrophic consequences. There is no deal even on how to call national commitments under the agreement — obligations, intended contributions or any other vague formulas.

© Fotolia / marrakeshh
Riyadh Undermining Climate Deal at COP21 - NGO Observer
The aim of Paris COP21 is to come up with a comprehensive binding climate change agreement, which has been the aim of climate change negotiations over the past six years.

She added that Riyadh had been blocking on a number of fronts, opposing any reference to 1.5-degree Celsius aim in the text, the target seen crucial by small island nations.

"Of course, Saudi Arabia is an oil-based economy, so it doesn't have a vested interest in seeing a strong outcome of this negotiation process." Liz Gallagher noted.

The chair of Alliance of Small Island States (AOSIS), Thoriq Ibrahim, praised the inclusion of the 1.5-degree Celsius threshold in the text, as he talked to Sputnik Sunday.

"I think during the negotiations and during the last few days we have been working on what is the best for our alliance of small island states, so we wanted to have the temperature rise below 1.5 degrees and we wanted to have it included in the agreement," Ibrahim, who is also the Maldives minister of environment, said.

The high-profile participants of the COP21 in Paris stressed several times that there is an unprecedented determination to successfully end the talks.

French President Francois Hollande urged on Saturday to overcome national interests for greater good and called on the ministers to reach the agreement next week.

Does the Paris Climate Summit Actually Mean Anything?