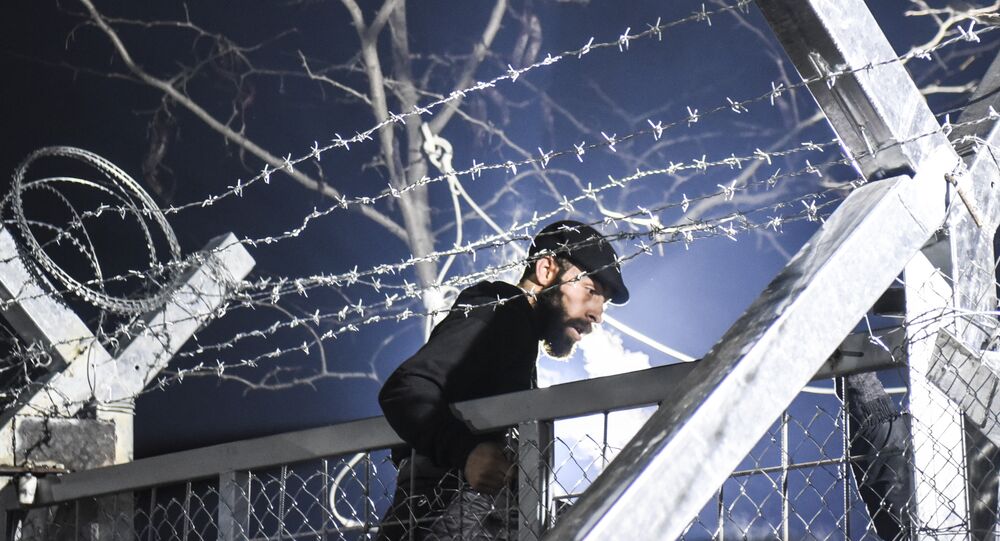 Threatened with being thrown out of the Schengen borderless Europe zone, Greece has accepted an offer from the European Union to bolster its borders with foreign guards as well as other aid, including tents and first aid kits.

© AP Photo / Visar Kryeziu
EU Sends Help as Migrant Chaos on Greek-Macedonian Border Escalates
Greece was threatened with being thrown out of the Schengen zone unless it could secure its borders amid the current refugee crisis. Greece — together with Italy — bore the brunt of the huge influx of refugees this year as asylum seekers fled war zones in Syria, Iraq, Afghanistan and Libya.

The European Council this week called for a massive strengthening of Europe's external borders, including deploying staff from Frontex — the EU border agency — to Greece to assist the country in controlling the flow of refugees into Europe.

There were reports Thursday that Greece was unwilling to accept foreign border guards on its territory, but these were denied by the government.

Greece Friday activated the EU Civil Protection Mechanism to benefit from material support to help cope with the influx of refugees and asylum seekers in the country. Greece has requested items such as tents, generators, beds, sanitary equipment and emergency first aid kits.

Authorities must ensure protection of those in need at Greek border with fYR Macedonia https://t.co/2ug4zDuvZG pic.twitter.com/RLEfdHkhKi

© AFP 2020 / ARIS MESSINIS
UK Asylum Seeker Accused of Masterminding EU-Wide People Smuggling Ring
The aid delivery is being coordinated by the European Commission's Emergency Response Coordination Center (ERCC) which is working closely with the Greek authorities and the other participating states for a swift response to the request.

Greece has also agreed an operational plan with Frontex for a new operation at the Greek border with the former Yugoslav Republic of Macedonia, where the agency will assist with the registration of migrants.

The deployment of additional officers will begin next week.

"It is crucial that all migrants entering the European Union are properly registered. Migrants at Greece's northern border will be checked and those found not properly identified will be registered," said Frontex Executive Director Fabrice Leggeri.

Greece has also put in a formal request for the deployment a Rapid Border Intervention Team (RABIT) operation to provide immediate border guard support at its external border in the Aegean islands. This is not the first time Greece has called for such intervention.

In 2010, Greece requested the deployment of RABIT on the Greek-Turkish border. The operation lasted from November 2010 to March 2011. This followed a large increase in arrivals and successfully brought down the numbers, with detected entries falling month-on-month from the October peak of 7607 to 1632 by February 2011.