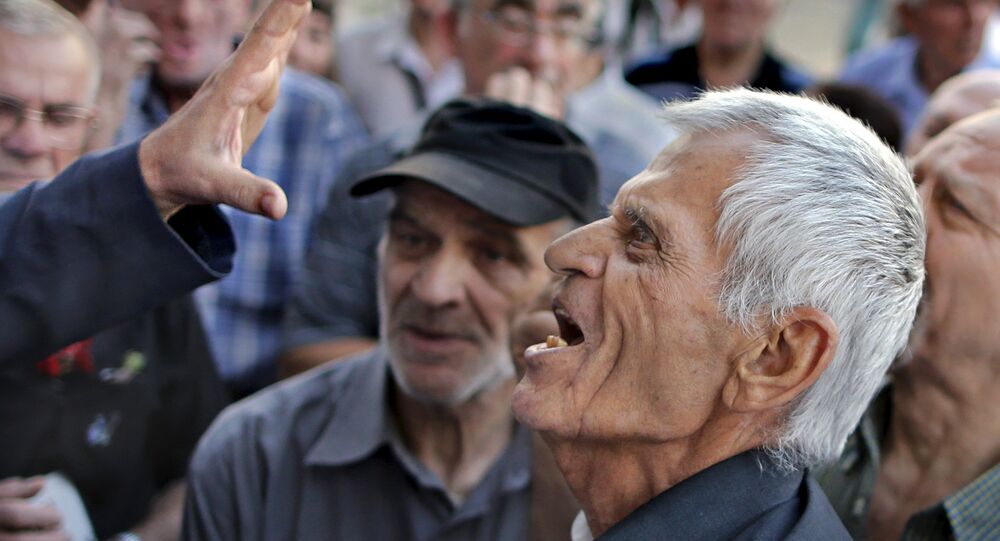 According to the Financial Times, several EU officials, including Luxembourg's foreign minister Jean Asselborn, warned Greece that unless it improved the conditions for refugees entering the country and boosted border controls, then it could face suspension from the 26-state free movement zone.

"We just cannot put up with a member country that has openly given up on safeguarding the Schengen area borders. Then Schengen is of no use."

During a meeting in Brussels this week, EU ministers are expected to ask Greece to step up efforts to control the flow of migrants and refugees into Europe, improve the registration of refugees and boost cooperation with the EU on the issue.

More than 740,000 people have arrived on Greek shores this year, including many on Greek islands in the Mediterranean.

© REUTERS / Alexandros Avramidis
Refugees and migrants line up inside a camp, as they wait to cross Greece's border with Macedonia near the Greek village of Idomeni, November 10, 2015

However the country, battling its own economic crisis, has struggled to provide adequate services to many refugees arriving on Greek shores, with serious humanitarian concerns over the conditions greeting migrants.

Despite criticism from EU officials and other member states, Greek officials have defended the country's actions in the trying circumstances, noting that there had been private threats made over possible suspension from the Schengen zone.

"It is not said officially, but there is pressure," Greek Migration Minister Yiannis Mouzalas said.

"These are very common lies for Greece… This blame game towards our country is unfair."

So #Greece is threatened with expulsion from #Schengen unless it agrees to become a huge #refugees camp? #EU_insanity

He added that so far only US$30 million worth of EU assistance had reached Athens due to bureaucracy on both sides.

Despite threats to suspend or expel Greece from the Schengen zone, Estonian Prime Minister Taavi Roivas warned against such action, telling Reuters that suspending Greece from the free movement zone would not be helpful.

"The problem is definitely there and I do know that we need to work together to solve it. But building fences between us is not a long-term solution."