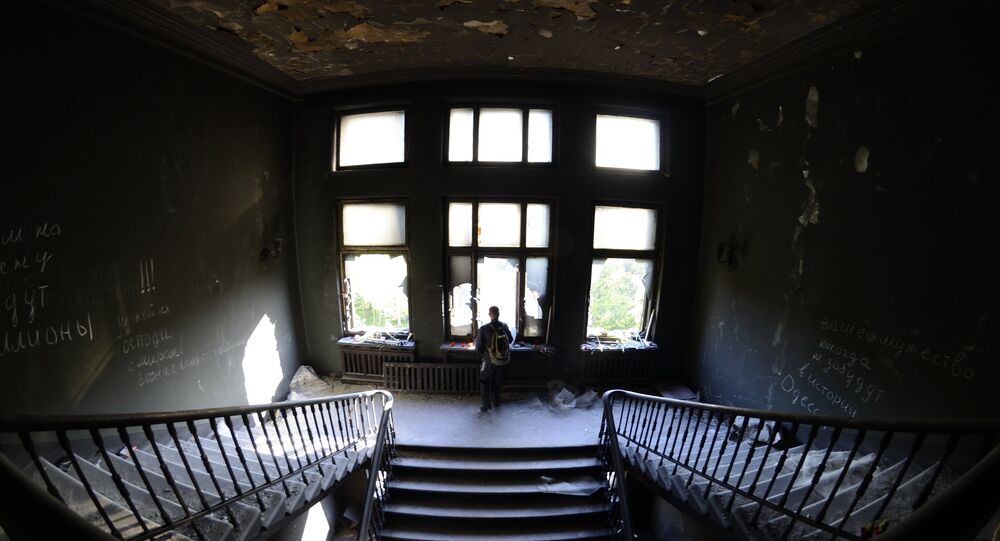 The Ukrainian prosecutor's office performance during its investigation into the violence in the country's southern city of Odessa in 2014 is unsatisfactory, Ukrainian Helsinki Human Rights Union (UHHRU), the largest association of advocacy groups in the country, said in a report.

KIEV (Sputnik) — The Ukrainian prosecutor's office performance during its investigation into the violence in the country's southern city of Odesa in 2014 is unsatisfactory, Ukrainian Helsinki Human Rights Union (UHHRU), the largest association of advocacy groups in the country, said in a report.

On May 2, 2014, pro-Kiev radicals clashed with anti-government protesters in Odesa before barricading them in the Trade Unions House and setting the building on fire. At least 48 anti-Maidan protesters died and over 250 were injured in the clashes and the blaze.

"The prosecutor's office is carrying out its functions to conduct an effective, thorough, prompt and impartial investigation into these allegations [concerning violations by law enforcement staff] extremely unsatisfactorily," the report, obtained by RIA Novosti on Tuesday, claims, adding that the probe into the Odesa violence is being conducted very slowly, and therefore remains incomplete, which is why no one had been brought to justice so far.

According to the report, the investigation is not being conducted in accordance with the UN Committee against Torture recommendations.

The investigators poor performance has resulted in the loss of key evidence, such as footage from surveillance cameras and records of the treatment administered for wounds sustained during the unrest, the report added.

"Ukraine must carry out a full, prompt, thorough and effective investigation into all the allegations of violence, including torture and violence on the part of law enforcement officers, one of the results of which should be to bring the perpetrators to justice, including in regard to the events [surrounding] Euromaidan and Odesa," the report stressed.

In early November, the Council of Europe International Advisory Panel pointed to evidence of police complicity in the Odesa tragic events.