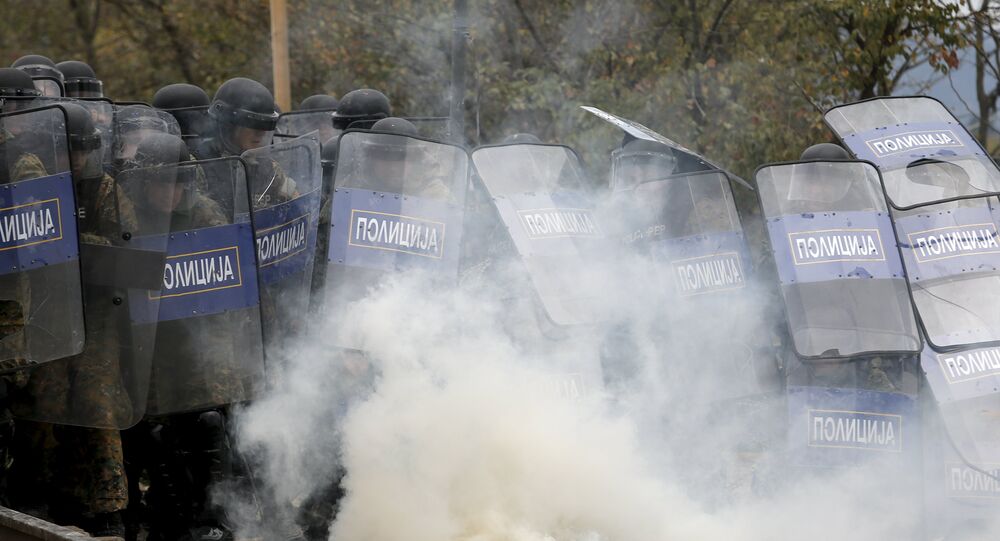 Macedonia erected a wall on its border with Greece as hundreds of migrants tried to enter its territory, leading to clashes with police, media reported.

© Sputnik / Vasily Raksha
Is This Sparta? This is Asotthalom! Sputnik Patrols Hungarian Border Fence
MOSCOW (Sputnik) — According to The Wall Street Journal, the migrants started throwing rocks at the Macedonian law enforcers, who responded by using tear gas when the country’s army began constructing the metal fence.

Macedonia, Serbia and Croatia have stopped allowing access to their territories to migrants from countries other than Syria, Afghanistan and Iraq amid security concerns triggered by the Paris attacks earlier this month. The move led to some 1,000 people from countries like Iran, Pakistan and Morocco being stranded on the Greek border with Macedonia, according to the journal.

© REUTERS / Yannis Behrakis
Stranded migrants shout to Macedonian police officers, as minor clashes broke out during a protest against the building of a metal fence at the Greek-Macedonian borders near the village of Idomeni, Greece November 28, 2015

Europe is struggling to manage the arrival of hundreds of thousands of refugees fleeing conflict-torn countries in the Middle East and North Africa in search of safety and shelter.

Macedonia reinforces a fence alongside its southern border of Greece to prevent migrants from crossing by #Idomeni pic.twitter.com/QOvt9iZ2Rf

© AFP 2020 / LOUISA GOULIAMAKI
So Why Are There So Many Young Males Among Refugees?
Greece is used as a transit hub by many people fleeing conflict-torn countries of the Middle East and North Africa, with approximately 160,000 asylum seekers arriving in Greece from Turkey in October alone, according to the International Organization for Migration (IOM).

Fears have reemerged of extremists reaching Europe by posing as refugees after a Syrian passport has been recovered near the body of one of the November 13 suicide bombers in Paris. Greek and Serbian officials both said they had registered the passport holder as an asylum seeker at their respective reception centers last month.