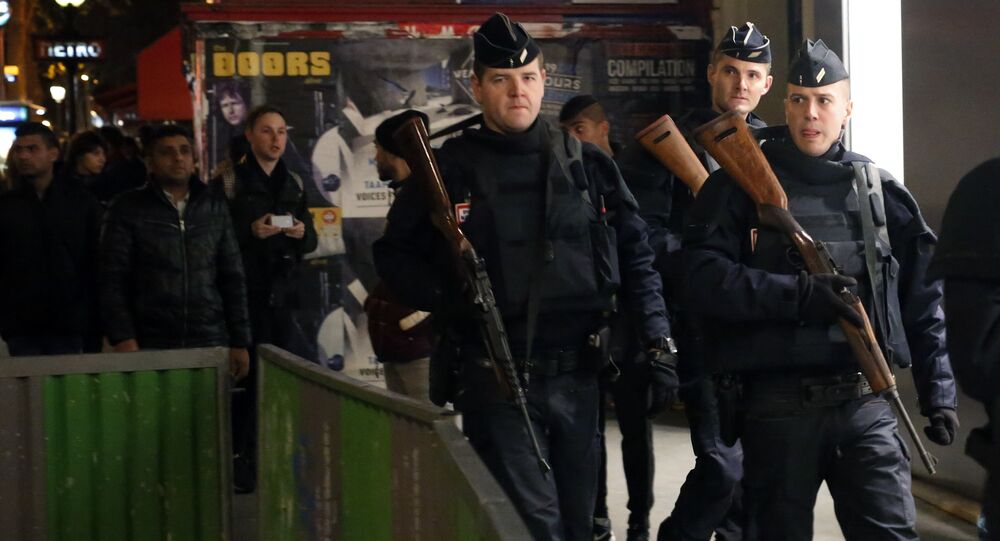 French Interior Minister Bernard Cazeneuve does not exclude that the three-month state of emergency announced in France following the Paris terrorist attacks might be extended, the France 2 TV channel reports.

MOSCOW (Sputnik) – According to the minister, if the situation with respect to the level of terrorist threat in France remains unchanged at the end of the three-month period, the state of emergency will be prolonged.

On November 13, a series of terrorist attacks were staged across the French capital, leading to the death of at least 130 people and injuring over 350 others. One of the attacks occurred at the Stade de France stadium, where French President Francois Hollande was watching a friendly match between France and Germany.

The Islamic State radical group claimed responsibility for the attacks.

© REUTERS / Philippe Wojazer
(File) Members of special French RAID forces with a police dog and French riot police (CRS) secure the area during an operation in Saint-Denis, near Paris, France, November 18, 2015 to catch fugitives from Friday night's deadly attacks in the French capital
© Flickr / Melvin E
Not Mosques, but Friends & Family to Blame for ISIL Radicalization - Expert
The French parliament passed a law that expanded the government’s emergency powers following the tragic events. It allowed to extend the state of emergency announced by Hollande after the attacks by three months, beyond the original 12-day limit.

The law also allows the imposition of house arrest without judicial rule, searches and seizures without a warrant and the blocking of websites deemed to promote terrorism.

Security measures have been enhanced in a number of other countries, particularly Belgium, where several perpetrators of the Paris attacks were based.

Over the weekend, Belgium raised its terror alert in Brussels to the highest level, while the rest of the country remained at level 3. On Thursday, Belgium’s Coordinating Unit for Threat Analysis (OCAM) lowered the level of threat of a terrorist attack in Brussels to the second-highest, level 3.