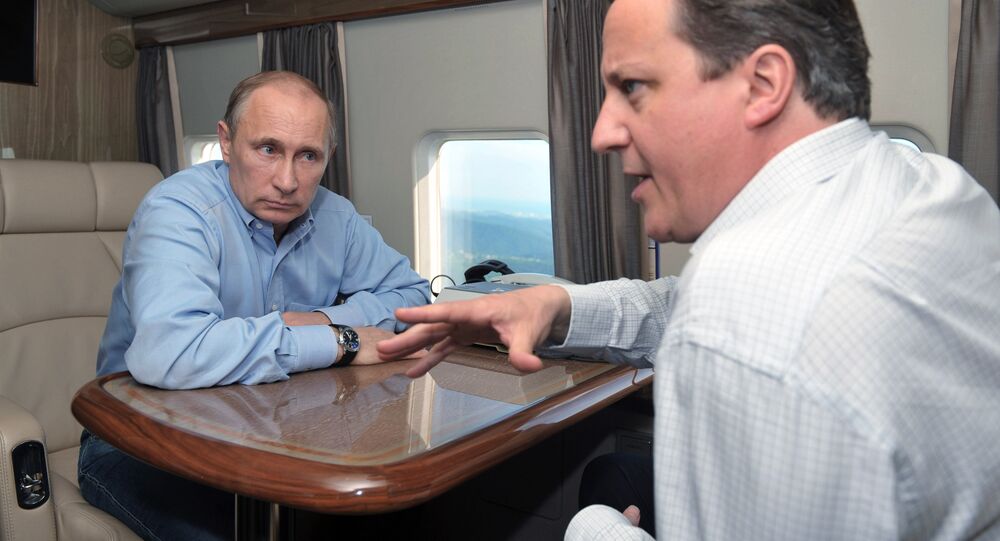 Would UK Media Tell Cameron to 'Stay Cool' If It Was a British Jet?

The "muted" response by France, UK and the US over the killing of the Russia pilots when their aircraft was downed by Turkish forces is "astounding - but not unsurprising", according to Marcus Papadopolous, editor of Politics First magazine.

"Hollande, Cameron, Obama… none of them have condemned the killing of the Russian pilots. That's absolutely astounding — but not unsurprising," Papadopolous, told Sputnik.

"I would probably ask, what would have been the response if a British or French aircraft was shot down by an Islamic State insurgent in Syria? And what if one of their pilots killed in the air was then abused on the ground?

"The point I'm trying to make is that the response was pretty muted."

The British media coverage of the Russian jet being shot down has been a disgrace. People need to wake up! #Russia #RussianJet #Turkey

Papadopolous says Turkey is protected militarily, economically and politically by the West because of its strategic position:

"Therefore, it has been able to get away with what it wants, as long as it remains the eyes and ears of the Middle East for the US."

The image of a Russian Su-24 jet downed over Syria by Turkish forces was published on the front page of every British newspaper. While headlines beneath the striking photograph called for President Putin to stay calm, there's a bigger picture at play, according to a leading UK media expert.

The Daily Mail — which has been skeptical about further military intervention offered a 'Dummie's guide' to the diplomatic minefield currently being played out in the Middle East.

"The Sunnis hate the Shi'ites… the Kurds hate President Assad… the Turks, NATO's most volatile member, hate the Kurds… Iran backs Assad but, like its Saudi enemies, claims to hate the barbarians of the Islamic State…

"Meanwhile, the Saudis and IS hate both Iran and Assad… Russia hates IS (but supports Assad)… and the French and Americans (who are cosying up to Iran) dislike Assad, but hate his IS enemy more."

Under the headline "Don't rush us into war as shot down Russian warplane shows how unpredictable Syria really is," the Mirror said:

"The immediate priority must be to avoid an escalation in the confrontation between NATO member Turkey and Russia. Once sucked into war, countries may find it hard to get out again."

"There's a bigger picture here, in that many of the British media expect there may be British involvement in Syria and are concerned that the situation in the region doesn't become more inflamed ahead of that."

"We need Russia alongside us against IS. So, the West must urge Putin not to ­over-react."

In its leader column, the Guardian urged:

Marcus Papadopolous, editor of Politics First magazine says the UK, France and Turkey should all look at their own involvement in Syria in the first place, for the reason why there is a need to wage war on ISIL.

"Officially, the US, UK, France and Turkey say they want to fight ISIL. But the reality is, that if you take those countries out of the equation, there is no ISIL."

"It would never have emerged in Syria. The UK, France and Turkey were arming, training, and financing various Islamic groups in Syria to overthrow the Syrian government. When these groups had brotherly fallouts, they joined ISIL and took their money, weapons and training with them," Papadopolous told Sputnik.

1.Russia was fully closing Syria off. Today #Turkey shot down a Russian jet while the US air force is given instructions to keep calm.

Leading UK media academic Dr James Rodgers also said the media may also have been guessing public opinion ahead of next week's likely vote in the House of Commons over whether to join airstrikes in Syria.

"I think public opinion on this is quite difficult to determine. Of course, in this country the memories of Iraq and Afghanistan are still very raw and I think there's a degree of public opinion which is very concerned about any further military involvement in the region.

"But, that [public opinion] has been affected by the attacks in Paris and the current situation in Brussels. So, it's quite difficult to put your finger exactly on public opinion, but I do think it's shifting and there's a feeling that British involvement in Syria is (a) necessary and (b) probably likely," he told Sputnik.

The West's failure to condemn Turkey is yet another piece of evidence to demonstrate its duplicitous role concerning ISIS. #IStandWithRussia

Did My Back Hurt Your Knife?