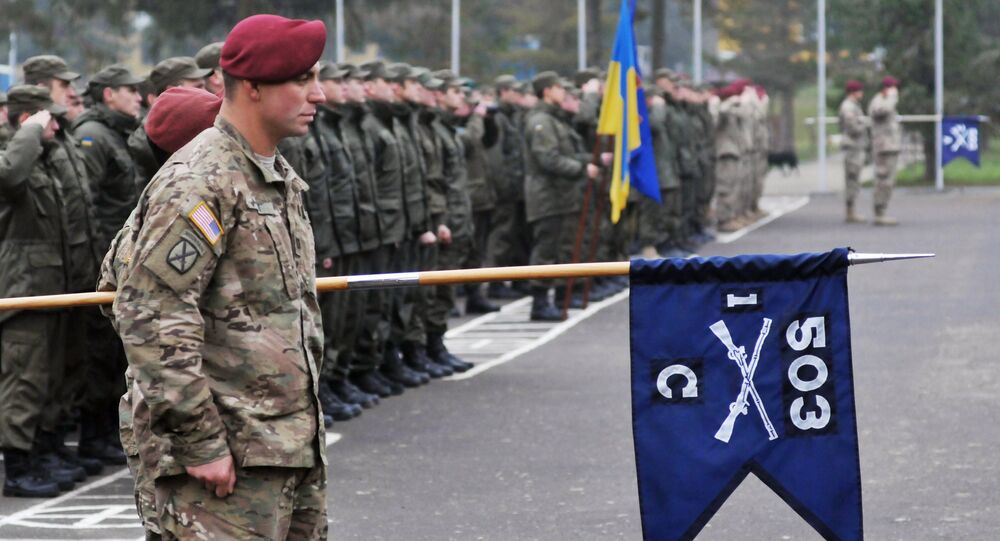 The Ukrainian government is trying to escalate the conflict in Donbass while pressuring Crimea in order to obtain more funding from the EU and US, where Congress has taken the worrying step of approving the delivery of lethal weapons to Kiev, the German press reports.

© AP Photo / Mstyslav Chernov
Will Ukraine Get Coal for Christmas? Maybe Not, in Wake of Crimean Blackout
The treatment of Crimea residents by the authorities in Kiev is indicative of a wider strategy to increase tensions in the east of the country and beyond its borders, wrote Deutsche Wirtschafts Nachrichten (DWN) on Monday.

"The EU-backed government continues to work together with extreme right wing forces: this weekend Crimea was paralyzed by several attacks on its power lines," writes the newspaper, which linked the attacks to the decision of the Kiev government on Monday to blockade the movement of goods in and out of Crimea.

The attacks on the power lines were carried out by extremist groups in the Ukrainian region of Kherson, which is controlled by Kiev, and so far the perpetrators have not been apprehended by the authorities there.

They occurred after some Ukrainian politicians, including members of Petro Poroshenko's political party, called for the Ukrainian authorities to cut off the power supply to Crimea.

"The idea that you should throw a criminal in jail does not occur to the government in Kiev," remarks DWN.

"In the end, it goes against Moscow – and here different rules apply."

"Germany has called on Ukraine to investigate the attack. The government expects that the power supply be restored, and that such attacks are not repeated, said a Foreign Ministry spokesman. The political conflict must not be played out at the expense of the people of Crimea," wrote DWN.

"But that is also only thunder for the theater: the conflict, of course, has been played out at the expense of the people of Crimea and Donbass for months."

"The current boycott (of Crimea) complements the boycott which the government of Ukraine has burdened its own citizens in Donbass with. They can only survive because they have been receiving humanitarian supplies from Russia for months."

© Flickr / broombesoom
The Crimean Energy Blockade: What You Need to Know
DWN refers to a statement made by Vladimir Putin earlier this month, in which the Russian President said he was worried by the recent decision by the US Congress to authorize up to $50 million in lethal military aid. These would include anti-armor weapon systems, mortars, grenade launchers, small arms, and ammunition for the Ukraine government to use against independent forces in Donbass who seek autonomy from the country's central government.

"In circumstances when a military conflict has ended and incidents of shelling are isolated, it is incomprehensible why the US Congress has taken the decision to make the delivery of lethal weapons to Ukraine possible. It begs the question, is there a desire to rekindle war and provoke military conflict," said Putin at the G20 summit in Ankara.

Brussels Expects Moscow to Be 'Rational' Over Kiev-EU Association Talks