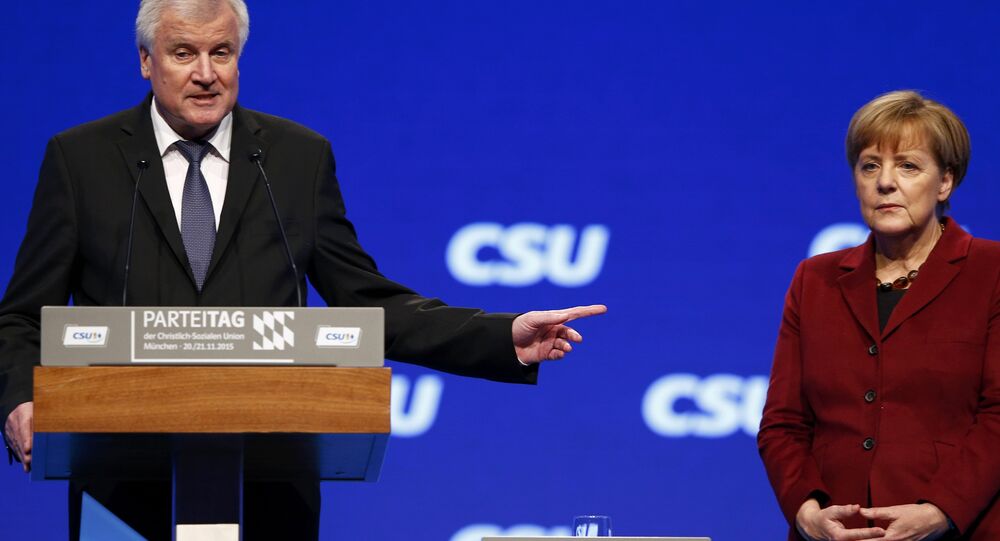 German Chancellor Angela Merkel has canceled a cabinet meeting after being publicly lambasted for 13 minutes by the leader of her coalition party partner and Bavarian Minister-President Horst Seehofer over her handling of the refugee crisis.

At the annual congress of his CSU party — which is in coalition with Merkel's CDU party — Seehofer made the German leader look like "a schoolgirl", according to local media. In a 13 minute tirade, he lambasted Merkel over the handling of the refugee crisis, demanding she set a limit on the number of asylum seekers the country would accept.

The German chancellor is reported to have listened to his tirade looking deeply unhappy. A planned cabinet meeting Monday night was canceled following the public spat as rumors began spreading that Merkel is about to U-turn on her refugee policy in an effort to keep her coalition together.

"This big historical task, the integration of refugees and securing the approval of the population, will not be achievable in the long term if we don't get an upper limit," said Seehofer to a huge round of applause.

Bavaria has been at the center of the refugee crisis ever since Merkel said her country's doors were open to Syrian refugees fleeing the war-torn nation. Her announcement precipitated the largest mass movement of people since the Second World War, plunging Europe into crisis.

© AFP 2021 / CHRISTOF STACHE
German police officer instructs migrants ahead of their walk from the Austrian-German border to a first registration point of the German federal police in the small Bavarian village Wegscheid, southern Germany, on October 20, 2015

The tide of refugees led to some countries closing their borders, others erecting razor wire fences and a huge row over whether countries would be forced to take in a set quota of refugees. The crisis has called into question a central pillar of the European Union — freedom of movement of people — as well as the Schengen borderless agreement and the Dublin rules, which say migrants must be processed at the point of entry.

© REUTERS / Fabrizio Bensch/Files
A Political Fairy Tale Gone Bad: Merkel's Stately Aura Fades
Germany originally said it would envisage 600,000 refugees from Syria, but the number is estimated to rise to 1.1 million by the end of the year. However, Merkel has constantly refused to put a cap on the number, saying that — constitutionally — Germany's basic right to asylum has no upper limit.

Her popularity ratings have fallen this year from more than 70 per cent to below 50 percent.

Merkel has already backpedaled over her policy of setting up transit zones to house the refugees while being processed, which was opposed by the other coalition party, the SPD, which likened the idea to setting up concentration camps.

At a crunch meeting in early November, Merkel backed down over transit camps and agreed to set up refugee centers and speed up processing, as well as the deportation of those refused asylum.

© REUTERS / Fabian Bimmer
Migrants use their cell phones in a canteen in a refugee camp in Celle, Lower-Saxony, Germany October 15, 2015.

Following Seehofer's very public dressing down of Merkel, she is reported to be poised to go back on her refusal to put a cap on the refugee numbers. She was reported to have talked of "fixed" quotas at the G20 summit in Turkey last week, telling lawmakers, "I cannot guarantee that you will already see a change in the coming weeks," but conceded that the current situation could not continue as it was.