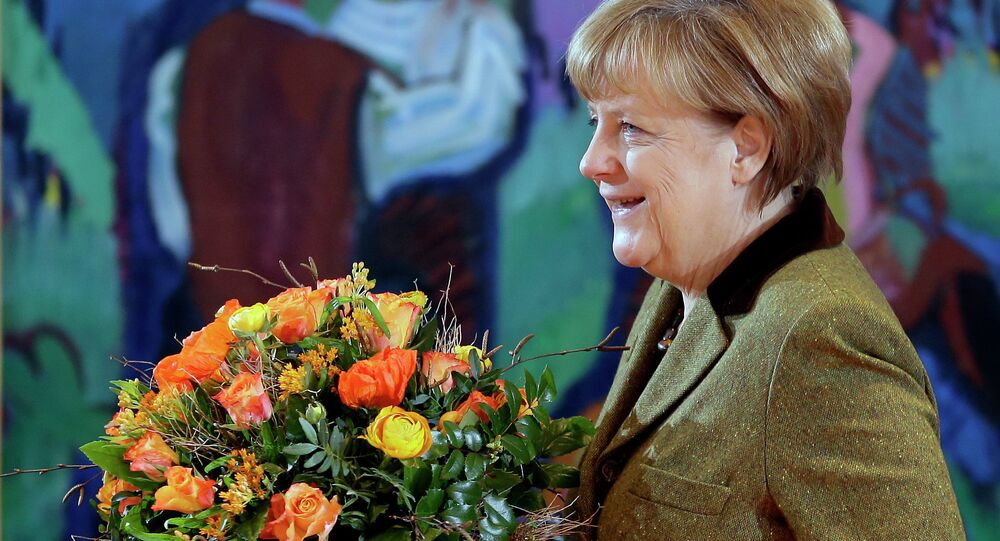 The migrant crisis and Syrian conflict have forced German chancellor Angela Merkel to face a host of tough decisions in order to avert the "end of Europe," warns a German newspaper.

© AP Photo
Germany on Alert: ISIL Planning Global Terror Spree
Political expediency will force the German chancellor to make bargains with the Turkish government that she would not have countenanced before the migrant crisis, and the reaction of individual countries to the migration could signal the "end of Europe," Deutsche Wirtschafts Nachrichten (DWN) wrote on Saturday.

"The European Union has become a one way street: there is money, but not solidarity," says DWN, referring to warnings from Merkel and French President Francois Hollande that the "end of Europe" threatens, if the union cannot find a joint solution to the migrant crisis, which they believe involves a "further deepening" of the EU.

In opposition to such calls for solidarity, however, DWN remarks that European governments are either building walls on their border, like Hungary and Slovenia, or preparing to do so, like Croatia and Austria. Other states, including Sweden and Bavaria, want to impose entry restrictions.

DWN: Merkel in a trap: The twilight of the gods has begun: German refugee policy in late autumn 2015.

The newspaper remarks on the importance of resolving the Syrian crisis, because most of the refugees in Europe are fleeing the conflict there.

"Shauble said that politics is a rendezvous with reality. The fact is, that Bashar al-Assad was elected president in 2000 with 97 percent of votes, and again in 2014 with 89 percent. It is obvious that he is not a political leader according to our expectations. His regime is authoritarian and inhumane. But it is also a fact that all religious communities can function undisturbed under Assad."

© Sputnik / Alexei Druzhinin
Turkey is Playing the Worst Part of Syrian Crisis - Assad
In order to solve the migrant crisis, the German leader will have to make bargains with Turkey which she would not have countenanced earlier, the newspaper writes, calling the idea of designating the country a safe country of origin for refugees "grotesque".

"Turkey is now further away from international law and 'European values' than ever before … someone who puts the constitutional bar as low as our chancellor will struggle to find a country not to designate a safe country of origin."

Despite previously being firmly against Turkish accession to the EU, Merkel is now giving Turkish president Erdogan hopes of speedy progress in accession talks, as well as billions of euros in payments, and visa exemption for Turkish citizens, in return for not allowing refugees to travel beyond Turkey.

© REUTERS / Tolga Bozoglu/Pool
German Chancellor Angela Merkel (L) meets with Turkish President Tayyip Erdogan in Istanbul, Turkey, October 18, 2015.
By engaging in such negotiations with Ankara (despite them being forced by political expediency), the Chancellor has done more to accommodate Turkey than she has to come to terms with public sentiment in her own nation, writes DWN, remarking on the "courage" she showed by going against her party on the refugee policy.

"With Lutheran straightforwardness she has waged war against her own people. Will she also have the courage to have a clear word with the foreign nations, which have triggered this recent migration?"