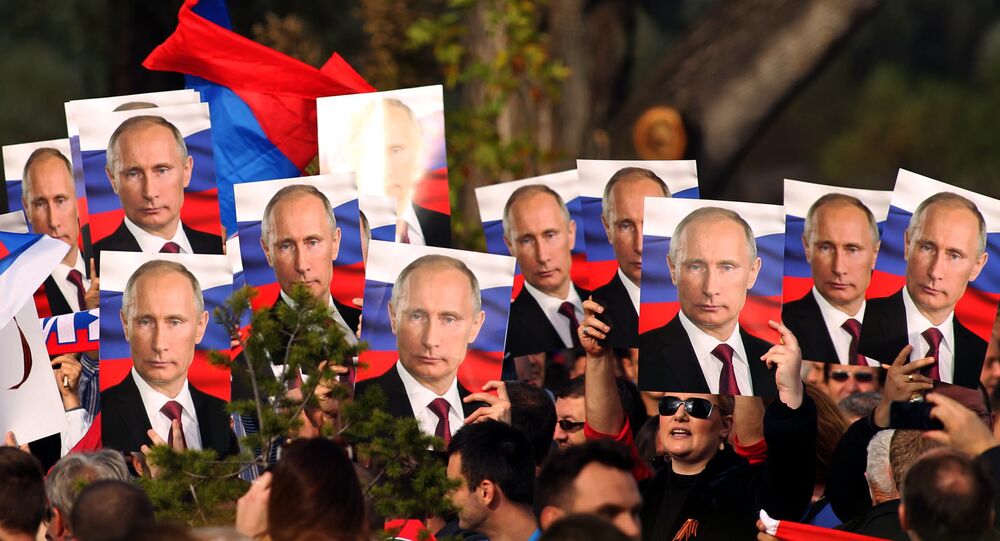 A Question of Trust: Serbia Prefers 'Alpha' Putin Over Own Prime Minister

A Serbian survey found that Serbs trust Vladimir Putin more than their own leader, and most would be happy to enter into a political and economic union with Russia.

© Flickr / MyBukit
Serbia Allowed to Control Airspace for First Time in 16 Years
Serbs trust Russian President Vladimir Putin more than any other leader, including their own, and would rather join a political and economic union with Russia than the European Union, a survey has found.

The poll of 1,100 adults in Serbia was carried out by the magazine 'New Serbian Political Thought,' [NSPM] and asked them which political leader they had most faith in. Serbian Prime Minister Aleksandr Vucic was the most trusted Serbian politician, and had the trust of 34.6 percent of respondents.

However, Russian President Vladimir Putin enjoyed more trust from respondents, who were also asked which foreign leader they trusted the most. According to the survey, President Putin has the trust of 36.1 percent of Serbs, far ahead of Angela Merkel, the next most popular, trusted by 7.3 percent.

Greek Prime Minister Alexis Tsipras was next with 1.6 percent, and US President Barack Obama has the trust of just 0.5 percent of Serbs.

'New Serbian Political Thought: Russia and Putin are in the hearts of Serbs, opponents and supporters of the EU are almost tied.' — NSPM published the results of the survey online.

Serbia's Blic newspaper asked sociologist Neven Cveticanin to explain the results. He described President Putin as a "political Clint Eastwood," who is cool, collected, and decisive.

"Putin is global. He attracts people with his strength, charisma, he has a specific lifestyle, image … that is interesting to people, regardless of whether they are pro-Russia orientated or not. Psychologically speaking, men identify with him because he is an alpha male, and women like that kind of man," explained Cveticanin.

Serbs were also asked their feelings on a possible union with Russia, or the EU. When asked if they support union with Russia, 68.2 percent replied positively, 18.9 percent were against, and 12.9 percent weren't sure. Asked if they support Serbia's entry to the EU, respondents were much more evenly split; 46.8 percent said yes, and 41.5 percent no.

© REUTERS / Heinz-Peter Bader
Serbia Would Receive Better EU Candidate Progress Report If Snubbed Russia - Belgrade
"The picture of Russia we get is a picture of strength and confidence, while news about Europe is crisis," expert Marko Savkovic of the Belgrade security forum told Blic.

Given a choice between the EU and Russia, respondents again voiced greater support for political and economic union with Russia; given the choice, 35.7 percent would chose Russia, and just 21.1 percent the EU.