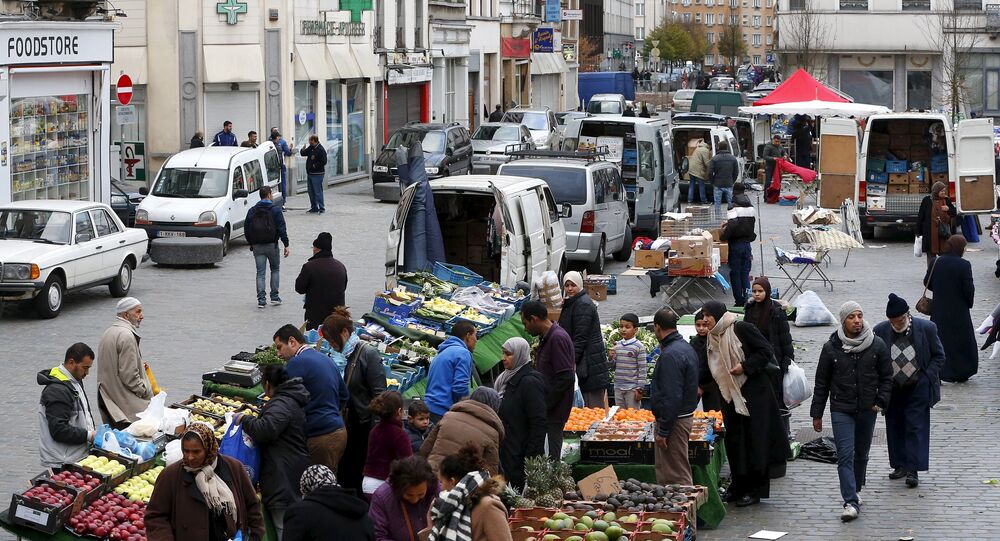 The overcrowded borough of Molenbeek in Brussels is a safe haven for radical Islamists: it is here where jihadists acquire weapons, find logistical support and networks to carry out terrorists attacks in Europe, the mayor of Molenbeek said, according to Reuters.

Belgian authorities arrested two residents of Molenbeek who were involved in a series of terrorist attacks in Paris.

© REUTERS / Yves Herman
Belgian Police Find Ammonium Nitrate, Ammo During House Search of Two Arrested Terrorists
The absurdity of the situation is that Molenbeek is in a short driving distance from the headquarters of NATO and the European Commission. In other words, there is a breeding ground for Islamic extremism and the main offices of both NATO and the EU coexisting in Brussels, literally at the heart of Europe.

"With 500 — 1,000 euros you can get a military weapon in half an hour," said Bilal Benyaich, senior fellow at Brussels think-tank the Itinera Institute, who has studied the spread of radical Islam in Belgium, according to Reuters.

"It's like an airbase for jihadists," Benyaich said, adding that the heavily-immigrant populated district of Brussels serves as a safe haven for terrorists.

© AP Photo / Frank Augstein
Belgium Considers Introducing State of Emergency
Muslim youth become radicalized and then go to Syria to fight, and when they come back to Europe they find support in Molenbeek. Radicals can not only easily purchase weapons, but also find accomplices and plan out terrorist acts both in Belgium and abroad, the expert on terrorism explained.

Molenbeek has had a number of connections to Islamist attacks in Europe. During the 2004 train bombings in Madrid one of the attackers was a Molenbeek resident of a Moroccan ancestry. A shooter at the Brussels' Jewish Museum in August 2014 was also living in the notorious Brussels district.

Furthermore, the perpetrators of the Charlie Hedbo attacks and the Moroccan shooter, who bought an AK-47 and close to 300 bullets, on a Brussels to Paris train in August also bought their weapons there.

And finally, two Belgian citizens, later identified as Hamza Attou and Mohamed Amri, were detained in Molenbeek in connection with the Paris attacks. When the men were arrested, their belongings tested positive for ammonium nitrate, which is used to manufacture explosives. Weapon munitions, in the form of 5.56- and 7.62-mm cartridges, were found in the apartment.