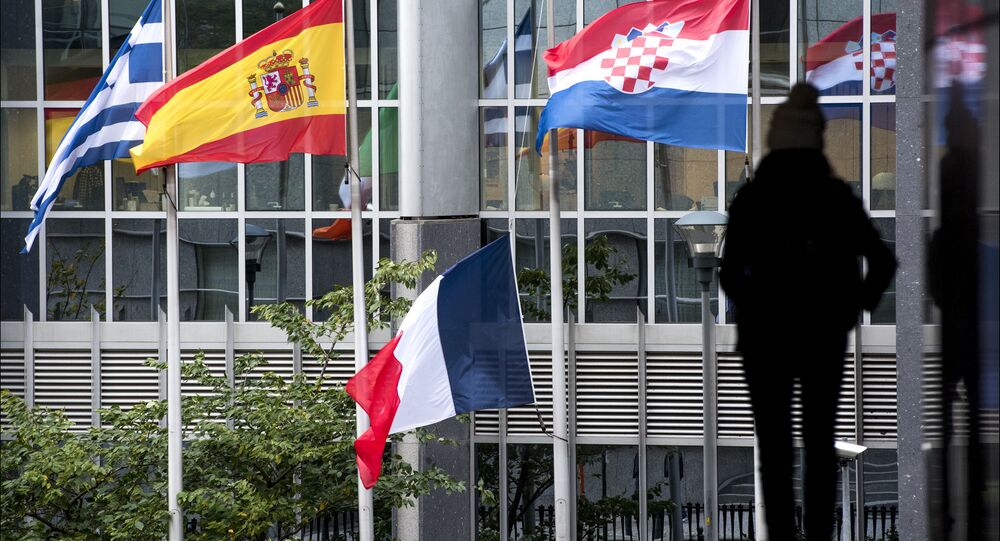 Following the Paris attacks, far-right groups in France have called for a restriction on immigration and permanent border controls, questioning the Schengen free movement zone. Meanwhile, disillusionment with EU austerity policies has seen an equally Euroskeptic push from the European left.

Backing President Francois Hollande's decision to declare a state of emergency in France, Marine Le Pen, leader of the Euroskeptic, anti-immigration National Front party, called on the government to crack down on Islamist cells operating in the country.

"France and the French are no longer safe. It is my duty to tell you so," she said.

Le Pen also called on France to renege on the EU's free movement Shengen zone and permanently close its borders.

"Whatever the European Union might say, it is essential that France recover the control of its national borders, once and for all," she said.

"Without borders, neither security nor protection is possible."

Political analysts in France have noted that the recent Paris terror attacks could lead to a surge in support for far-right groups like the National Front, with citizens seemingly unhappy with the current status quo in Europe.

With French regional elections coming up in three weeks, far-right groups — many of which favor an exit from the EU and strict controls on borders and immigration — are tipped to make historic gains, amid criticism that the current government isn't doing enough to stamp out the terror threat.

The Rise of the Right

However, the right-wing backlash against the EU certainly isn't isolated to France.

Hungarian Prime Minister Viktor Orban, who has clashed with Brussels on numerous occasions over the country's hard line approach to the refugee crisis, is another leader on the right of the political spectrum, gaining increasing domestic support for his party's approach to recent events.

Many have been critical of the EU for failing to come to an agreement over the refugee crisis, with Orban among the strongest opponents to calls for a voluntary refugee quota system to be adopted by EU member states.

In Poland, the conservative Euroskeptic Law and Justice party came into power last month, marking the first time since 1989 that there will be no left wing party in parliament.

© Photo : Pixabay
New Politics of Europe: Rise of Right and Left Against Traditional Center
The Conservative win came amid ongoing frustration with the previous Centrist government, which many voters believed were too willing to support EU policies in Brussels, rather than represent Polish interests.

Meanwhile, perhaps the most dangerous Euroskeptic threat to the EU comes from the UK, where Prime Minister David Cameron has pledged to give the British public an In/Out vote on EU membership before the end of 2017.

While Cameron himself has argued that he would prefer Britain to remain within a reformed EU, many within his Conservative party are diehard Euroskeptics, who are pushing for the country to cut ties with Brussels regardless of reform negotiations.

The Rise of the Left

Just as the right wing of European politics has experienced a resurgence in popularity amid dissatisfaction with EU governance, so has the European left, with many parties vehemently at odds with Brussels-imposed austerity policies in the wake of the 2008 financial crisis.

© AP Photo / Lefteris Pitarakis
Alexis Tsipras the leader of left-wing Syriza party waves to his supporters after the election results at the party’s main electoral center in Athens, Sunday, Sept. 20, 2015.

The most well-known left wing rebellion came in the form of Greece's Syriza party, who emphatically stormed to power in January on the back of an anti-austerity message in a country struggling to deal with eight years of Brussels-enforced cutbacks.

Many in Athens were critical of the EU's insistence that in return for financial aid bailouts, Greece needed to implement a strict austerity policy which saw savage cuts to public services, leading many Greeks into unemployment and poverty.

While Alexis Tsipras' government ultimately failed to secure reforms from the Eurozone, many commentators noted that the Greek uprising had the potential to spark more left wing rebellion in other countries still reeling from austerity politics.

This fear among Europhiles was seemingly realized earlier this month when a Leftist coalition of parties in Portugal — once seen as the EU's poster child of successful austerity — won enough votes to form a government.

© AP Photo / Francisco Seco
People shout slogans outside the Portuguese parliament during a protest by Portugal's main union CGTP, General Confederation of the Portuguese Workers, against cuts in salaries and pensions and others austerity measures taken by the government, in Lisbon, Thursday, July 10, 2014.

While the coalition, headed by the center-left moderate socialists, have said they will abide by EU fiscal spending rules, leaders are set to defy Brussels by increasing public wages and boosting spending.

With Europe arguably facing its toughest test in many decades as a result of terrorism, immigration and economic problems, EU politics have proven to be even more volatile. Increasing numbers of voters are rejecting EU-aligned governments, which are seen by many as a symbol of failure, incapable of coping with Europe's current ordeals.

'Not a Basic Right for All': Hungarian PM Defends Anti-Immigration Approach