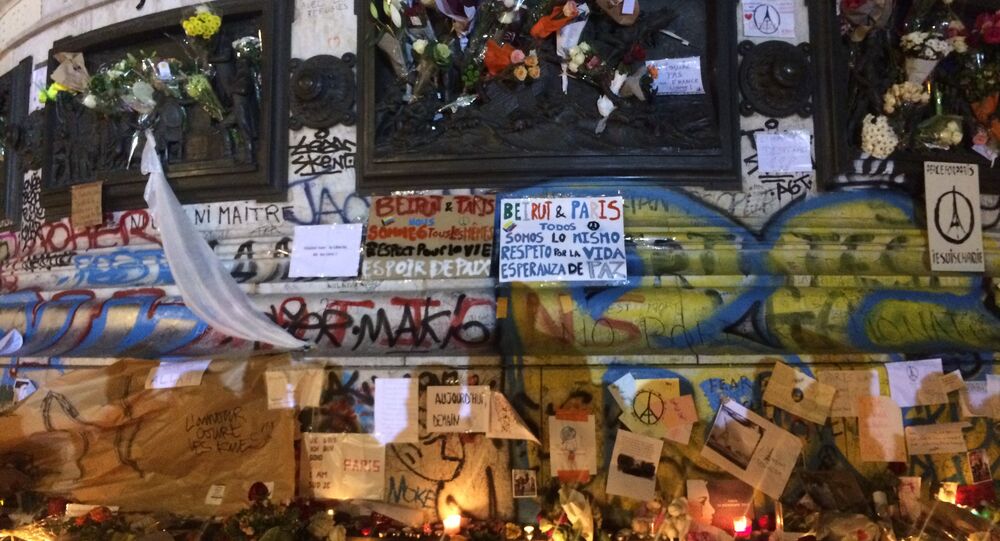 Imagine All the People: Londoners Congregate to Show Solidarity With France

Thousands gathered on Saturday evening in Trafalgar Square to honor the victims of the Paris attacks.

© AFP 2021 / LOIC VENANCE
New Shooting Incident Rocks Paris, One Wounded
The attacks, the deadliest in Europe since the Madrid bombing in 2004, killed 129 people, according to officials.

Londoners, many of them French residents, sang the French national anthem several times, with more people joining in throughout the evening.

With the colors of the French flag projected onto the National Gallery behind them, they spontaneously broke out into song, including "Aux Champs Elysées" and John Lennon's "Imagine" and chants of "Solidarité" and "Vive Paris".

On a number of occasions, attendees held up their phones, using the torchlight in lieu of candles to mark a minute's silence.

The main vigil, which kicked off at 8, was organised by two Frenchmen living in London, who created a Facebook page for the event on Friday night.

'This isn't a political movement, this is a gathering for us to support each other," explained Theo, one of the organisers.

He stressed that he didn't want any physical or visual display of religious or political affiliations.

"We don't want any flags or banners about such and such cause, or pointing fingers or implying anything," Theo said.

One girl who'd unfolded a "Muslims for peace" banner was asked to pack it away shortly after by a police officer, who explained Theo's stance.

Incidentally, another vigil was held by umbrella group the Christian Muslim Forum, joined by Shuja Shafi, the Head of the Muslim Council of Britain.

The Forum's representatives, Bishop Paul Hendricks and Akeela Ahmed, encouraged people to light candles and leave flowers near the Square's fountain, before joining the rest of the crowds.

"We came here to show solidarity with the people of Paris, of Lebanon and people around the world suffering from terrorism," Akeela said. "I hope everybody can use this as an opportunity to come together and not let hatred win."

This was echoed by many people at the vigil, who stressed the importance of unity and solidarity.

"It's important to stand together in such times,"  said Julien, a French student. Perpetrators want to divide and provoke tensions."

However, one Muslim girl whose family is from Hong Kong, talked about the finger-pointing and divisive rhetoric that she'd encountered online.

"I've seen a lot of anti-Muslim speech on social media, and my friends are scared of being attacked at work because of that," she said.

Ahmed, originally from Djibouti, echoed her words, and referred to comments in the media putting the blame on immigrants and refugees.

According to him, these attacks are the result of a "home-grown threat."

French resident Paul, standing with him, added that "refugees face this (terrorism) where they come from, so blaming them is ridiculous."

Many people expressed concerns about potential repercussions on freedoms of speech and movement and privacy.

Jan from Sweden said attacks like these could be used by governments to introduce draconian measures that might curtail such freedoms.

"It's important that we don't forget the very principles on which these countries are founded," he said. "Privacy, freedom of expression, that's what we're fighting for. Taking these basic rights from the population means we have lost."

French resident Anais said she was worried about the fear and paranoia that tends to result from such events.

"We should be careful not to give in to this fear, or the door is open to all sorts of abuses, be they restrictions imposed by the government or divisive groups using it to their advantage," she expressed.

Opinions diverged regarding the responses and actions of the French and British governments.

Ally, an American student, said the UK government had "clearly stepped up its game," as she'd been hearing about a number of foiled plots.

However, English project manager Martin said the government had a lot to answer for.

"A lot of this comes from appalling foreign policy decisions that allowed this sort of extremism and violence to grow," he said. "They clearly haven't learnt their lessons, considering there was talk of bombing Syria."

Anais's brother said he is disillusioned with the French government and distrusts their intentions.

"I don't expect anything from the government," he said. "What did they do after Charlie Hebdo? Nothing. They aren't affected by this. It's ordinary people that pay the price."

He added that the media has added to the state of confusion over responsibility: "Who knows, is it jihadists? Commandeers with a lot of money? Is it about religion or oil? Nobody knows anymore."

The evening culminated in last rendition of the Marseillaise, as attendants held hands to form a large circle.

President Hollande has declared a state of emergency across France, as troops look for accomplices of the perpetrators of Friday's attacks.