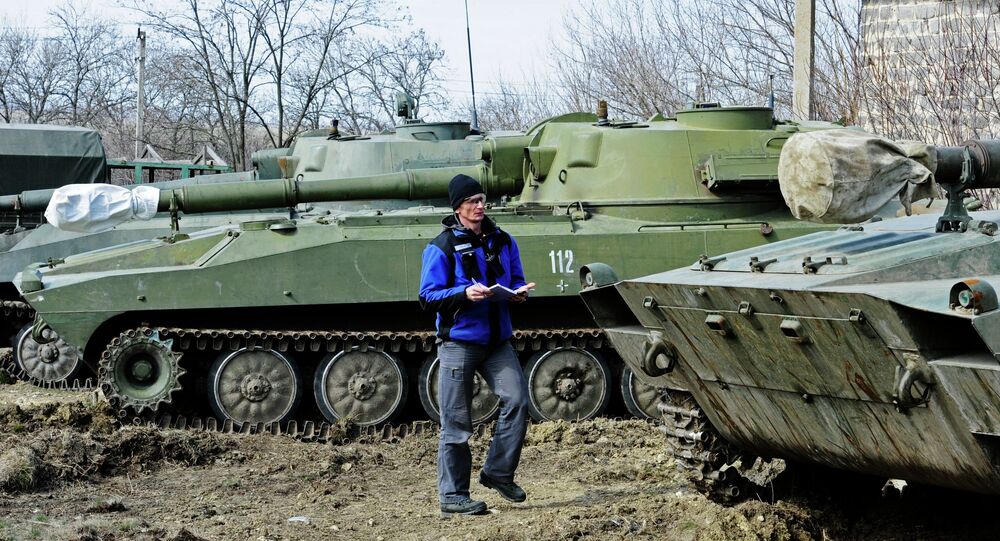 The Ukrainian Armed Forces and the self-proclaimed Donetsk People’s Republic (DPR) in the country’s southeast have submitted documents verifying the completion of mortar withdrawal from the line of contact, the Special Monitoring Mission (SMM) of the Organization for Security and Co-operation in Europe (OSCE) deployed in Ukraine informs.

MOSCOW (Sputnik) – The OSCE has been tasked with monitoring the implementation of the Minsk II provisions, which include a full ceasefire, a weapons withdrawal from the line of contact in eastern Ukraine, an all-for-all prisoner exchange, constitutional reforms, including a decentralization of power in the country, and the granting of special status to the Donetsk and Lugansk regions.

"In relation to the implementation of the Addendum, the SMM received written notifications of completion of withdrawal of mortars from the Ukrainian Armed Forces and ‘DPR’," the SMM said in its November 10 report, released on Wednesday.

According to the monitors, two mortars were absent from one Ukrainian Armed Forces’ permanent weapons storage site. At DPR storage sites, all weapons were present, although at two of the sites some serial numbers on mortars and tanks did not match those in the inventory.

"Neither ‘DPR’, nor ‘LPR’ [self-proclaimed Lugansk People’s Republic] had yet provided the requested inventory of heavy weapons, or locations of designated permanent storage sites for these weapons. Likewise, the Ukrainian military authorities are yet to provide this information," the SMM stressed.

Weaponry withdrawal is one of the provisions of the Minsk peace deal, signed by representatives from Kiev and Ukraine’s self-proclaimed southeastern people’s republics in February.

Ukraine’s southeast was targeted by Kiev’s special military operation in April 2014, after residents of Donetsk and Lugansk regions refused to recognize the new coup-installed government.

The February peace deal signed between the conflicting sides in the Belarusian capital is the second ceasefire agreement – the first one, reached in September 2014, failed to hold.

Wolves in Sheep’s Clothing? Ukrainians Pretend to Be Gay to Enter EU