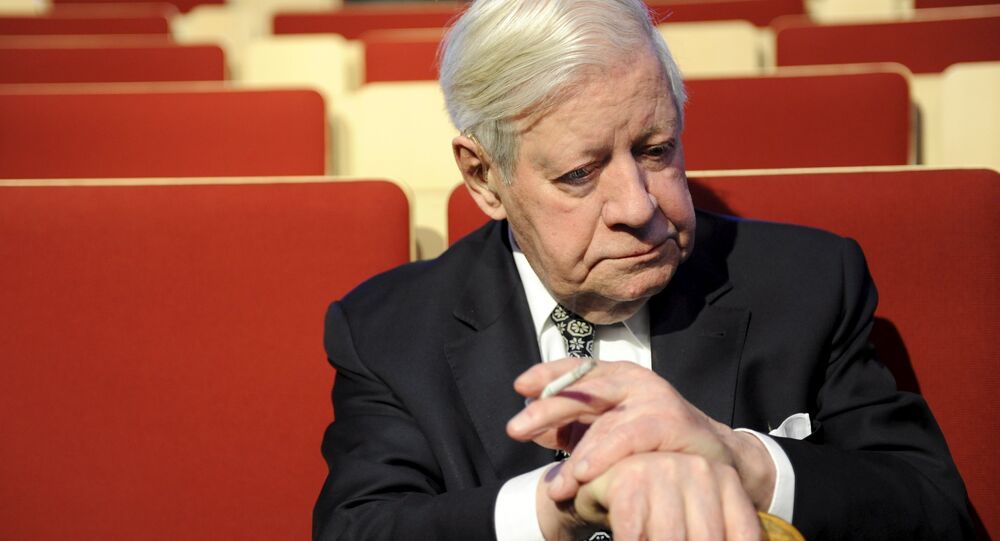 The former German Chancellor Helmut Schmidt has died aged 96. He was in power from 1974 to 1982, during which time he led Germany out of its post-war gloom and built on the 'economic miracle' that led to it being the powerhouse of Europe.

Schmidt was receiving treatment at home after suffering a "dramatic" downturn in health earlier this week, according to the NDR radio and television broadcaster.

© AFP 2020 / JOHANNES EISELE
German Ex-Chancellor Helmut Schmidt in Intensive Care
Chief among Schmidt’s achievements was his continuing support for the European Monetary Union that eventually led to the creation of the single currency, the euro. But he was also responsible for a wide variety of domestic reforms, including taxation, unemployment support, education and training and workers’ rights.

Schmidt was born in Hamburg in 1918 to Ludovica and Gustav Ludwig Schmidt – both teachers. He became a group leader in the Hitler Youth organization until 1936 when he began expounding anti-Nazi views and was demoted.

He was conscripted into military service in 1937 saw action at the Siege of Leningrad, a period as an adviser at the Aviation Ministry and a final posting on the Western Front. On 27 June 1942, he married his childhood sweetheart Hannelore "Loki" Glaser who predeceased him in 2010). He was captured by the British in April 1945 on Lüneburg Heath and was a prisoner of war.

He joined the Social Democratic Party of Germany (SPD) in 1946, and was leader of the Socialist German Student League, the student organization of the SPD from 1947 to 1948. He took up his first job in Hamburg at the department of economic policy.

He was elected to the Bundestag in 1953, and – four years later – became one of the party’s executives. Because of his outspoken views he became known as "Schmidt-Schnauze" (loud mouth). From 1958 to 1961 he was a member of the European Parliament, which at that stage was not directly elected.

In 1961, he became a Senator of the State of Hamburg, where he served as Interior Minister for a time before being re-elected to the Bundestag in 1967. He became chairman of the grand coalition between the SPD and the Christian Democratic Union (CDU). He also became defense minister under Willy Brandt where he reduced the length of military conscription from 18 to 15 months and introduced military universities to broaden the academic knowledge of the army recruit.

When he succeeded Brandt as Chancellor in 1974, he set about a series of economic reforms, despite the global economic crisis precipitated by the OPEC oil embargo which sent the price of crude from US$3 to US$12 a barrel.

He steered Germany through a series of social reforms, which included pursuing policies to reduce unemployment and keep the economy on a stable footing. Other reforms included welfare and benefit reforms, raising the minimum working age to 15, tax reforms and a plan for German cities to put in place a post-war rebuilding program.

Political factions within the coalition led to a vote of no confidence in Schmidt who was ousted as Chancellor in 1982.

After leaving politics, Scmidt founded AEI World Forum, an annual meeting of business and financial executives, heads of government, government officials, and intellectuals. He also became co-publisher and then managing editor of Die Zeit newspaper. He wrote numerous books and continued to play an active role in German political life.

He was admitted to hospital in September 2015 and put in intensive care after suffering a blood vessel blockage in his right leg. Schmidt has smoked over 60 cigarettes a day since he was a teenager.

Former German Chancellor Helmut Schmidt: the EU and Russia are not willing to yield to the U.S.