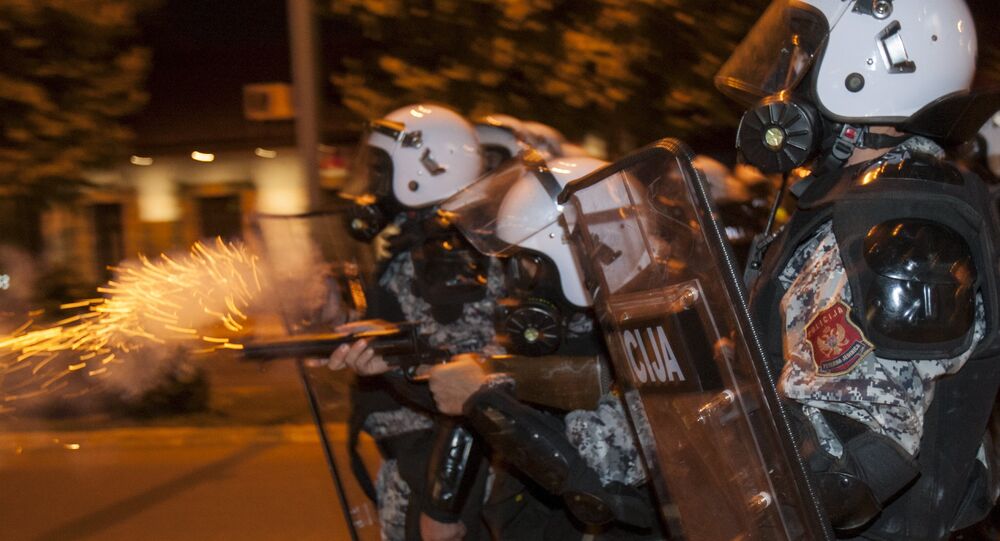 Montenegro Opposition: We’ll Protest as Long as It Takes

The brutal crackdown of a massive anti-government rally in Podgorica on October 24 has only galvanized the opposition, prompting it to change tactics; rather than holding national rallies, its leaders are going from town to town in the tiny country of 620,000 people, delivering speeches; the latest was staged in the coastal city of Bar.

Vasily Raksha — “We will protest as long as it takes to achieve our goals,” Dr. Strahinja Bulajic, the Vice President of the political party New Serb Democracy told Sputnik. His party is part of the Democratic Front – a broad coalition opposed to the country's ruling Democratic Party of Socialists and its Coalition for a European Montenegro.

"[They] Jeopardized the moral foundation of this country, the future of our children" Strahinja Bulajic

Montenegro is undergoing a severe economic, social, moral and spiritual crisis, he said, referring to the protests. He claims the country is tired of Prime Minister Milo Djukanovic’s reign, and believes it has led the country into a dead end.

© AFP 2021 / SAVO PRELEVIC
Montenegro Protests From A to Z: What is the Nation Calling For?
He has been ruling for 27 years [in different positions starting in Yugoslavia] but the economy is not even in stagnation; it is falling apart: factories are closed, and unemployment is dramatic for our country of 620,000 people,” he said.

According to IECONOMICS, the unemployment rate in Montenegro constituted 15.67 percent in October.

Montenegrins want to get rid of the “corrupt”, “occupational”, “mafia” regime, opposition leaders exclaimed onstage, slamming the leader's kleptomaniacal crony capitalism and accusing him of dictatorship. The audience responded by whistling at and booing at the sound of the PM’s name, and on the other hand welcoming the speakers with terrific applause and chanting their names.

The atmosphere was electrified, resembling a powerful street demonstration.

“All we want by our protest is to have an interim government for holding the first free democratic elections in the history of Montenegro,” Dr. Bulajic told Sputnik, emphasizing that the protests will never ever turn violent. “We want respect for the will of the people.”

Djukanovic ultimately lost public confidence after engaging in vote rigging during the 2013 presidential and local elections, the politician said. Therefore the opposition wants to suspend him from organizing elections in the future.

Three opposition MPs: Milan Knezevic, Andrija Mandic and Slaven Radunovic risk being stripped of their immunity from prosecution and criminal charges for organizing the anti-government rally.

“People are our immunity,” stated Knezevic and got a wave of rousing cheers from the responsive audience.

After an hour of heated speeches, the galvanized people spilled into the streets of Bar and marched around the town center. They attracted a group of approximately 1,000 people. Walking along the empty evening streets, the demonstrators shouted out “Milo [Djukanovic] – thief” and “together [we are strong].” The leaders walked in the front with a banner reading “Freedom Calling Me”.

The march went peacefully. Several policemen were deployed to cross-roads to prevent any traffic accidents. Bar residents observed the demonstration from their balconies. The chanting and booing surged when the participants passed by a billboard depicting Milo Djukanovic insisting NATO membership would guarantee the country a “secure future”.

NATO remains a sore point for Montenegro; Dr. Bulajic explained to Sputnik that he was vigorously opposed to the idea of joining the alliance, which he claims is being pushed by the leadership because membership in a bloc that mercilessly bombed the Union State of Serbia and Montenegro in 1999 was unforgiveable.

Dr. Strahinja Bulajic, the Vice President of the political party New Serb Democracy told Sputnik: “For 300 years we have had friendly relations with Russia, only Russia helped Montenegro, and without it we would not have survived. NATO membership just goes against our spirit and nature.” He's not the only Montenegrin opposed to the alliance.

Twenty-six-year-old Danijel argued that the security risks Montenegro is facing originate in Albania, where nationalists lay claims on the territories of adjacent countries – the so-called concept of Greater Albania. Citing the case of Kosovo, he said that although now the threat is not supported by actual action, it may come to life in the measurable future. However, even this menace could not outweigh the suffering NATO brought to Serbia and Montenegro.

© AP Photo / Dimitri Messinis
NATO? We are Suffering From Cancer Epidemic They Triggered – Montenegrin Politician
“They were bombing us for 78 days, one after another, we cannot forget it. How can we join NATO after it?”

Dr. Bulajic added that “only time will show” why Prime Minister Djukanovic is dragging Montenegro into the Alliance, but described the whole initiative as a betrayal on a par with the leader’s behavior during the NATO bombardments, his referendum on breaking up with Serbia in 2006 and the recognition of Kosovo.

“The Democratic Front comprises five parties, four of them against NATO and one championing the membership. But we all agreed that only Montenegrins have the right to decide on it, and it should be done via a fair referendum.”

But bus driver Rajko has his own take on why Djukanovic is so ardently promoting the military bloc. In 2012 the US found evidence corruption had taken place during the privatization of the Montenegrin state-owned telecommunications company “Telekom” in 2005, which allegedly involved Milo Djukanovic’s sister receiving bribes. The PM dismissed the charges. However, in Rajko’s opinion, the US can now blackmail him, turning him into a compliant puppet fostering Washington and Brussels’s interests in exchange for securing his own position.

Rajko panned the government for its low salaries and irregular working schedule – to make a living, people have to work up to 12 hours and on weekends.
The sanctions Montenegro imposed on Russia are catching up with those in the West, and are from the same stable as the artificial NATO aspirations.
“Sanctions? On Russia? From Montenegro? It’s ridiculous”, Rajko said bursting out laughing.

Over 120 Injured During Anti-Government Rally in Montenegro