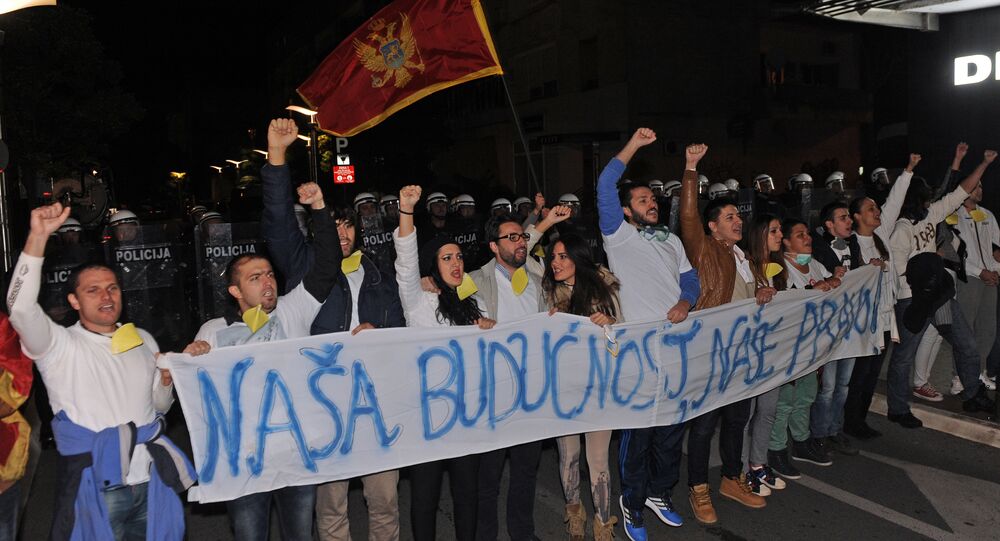 Montenegro Protests From A to Z: What is the Nation Calling For?

Describing the protests in Montenegro, mass media often repeat the same mistake by mixing up the single anti-NATO rally on October 14 with the massive anti-government economic rebellion that began on September 27 and lasted three weeks. Sputnik provides you with the complete picture of the events.

Vasily Raksha — The NATO membership debate is just the tip of the iceberg. The powerful anti-government demonstration unites different parties and people, even those who disagree on the NATO issue.

"In 2006 he created his own feudal state with corruption and organized crime," complained taxi-driver Miodrag referring to Montenegrin Prime Minister Milo Djukanovic and a referendum on independence from Serbia. "He prohibited Montenegrins registered in Serbia to vote to achieve his aim," Miodrag complained.
The protest gathered 15,000 people –a tremendous number for Podgorica given it has a population of less than 200,000, the taxi driver emphasized.

The Montenegrin plebiscite on secession from the Union State with Serbia took place on May 21, 2006 with the 55.5 percent pro-independence outcome just scraping past the 55 percent threshold.

© AP Photo / Dimitri Messinis
NATO? We are Suffering From Cancer Epidemic They Triggered – Montenegrin Politician
The figure of Prime Minister Milo Djukanovic is regarded as an enigma by protesters. The politician has been in power for 25 years holding various positions: president, prime minister, and defense minister. His opponents accuse him of abusing his power and shopping national interests and economy for the sake of his own wealth.

Twenty-one-year-old Montenegrin Ilija used to be a software engineering student. But now he is an active protester and took a three-hour-long ride to join an opposition meeting in the town of Berane.

"The government does not provide good salaries, the economy is poor, we don’t have money and I had to give up my education. I want freedom, and particularly freedom to study and work, freedom of speech. They say that I am an enemy."

His father works in construction and his mother cannot find a job. Ilija’s parents do not mind their son going to protests instead of discos, which would be much more usual for someone of his age. They also took part in the rally and their only fear is that their boy could be attacked by police (the brutality, water cannons and tear gas with which police suppressed the demonstration shocked Montenegrins).

The young man wants a complete change of the leadership.

He also participated in the peaceful anti-NATO rally.

"They bombed us and I don’t trust them. If Montenegro joins NATO, a civil war will break out, and Djukanovic will be killing all opponents of NATO."

All We Want is Fair Elections

The Democratic Front, a broad political coalition comprising opposition parties, NGOs and other organizations as well as individuals, adopted a strategy for its leaders to deliver speeches in different towns of the country. On Thursday, November 5, the coalition summoned a meeting in the culture hall of Berane under the slogan "Freedom or Nothing."

© Sputnik / Vasily Raksha
The Democratic Front summoned a meeting under the slogan "Freedom or Nothing."

As we were driving through the town, three police cars caught up with us before driving away.

The overcrowded hall was not spacious enough to provide seats for all 400 attendees – most of them middle-aged, though some young people were also present.

Opposition figures including prominent Milan Knezevic of the Democratic People’s Party and Andrija Mandic of the News Serb Democracy announced three messages to the public and the government of Milo Djukanovic.

1. We are not afraid – referring to the outrageous police brutality observed during the quashing of the demonstration;

2. We will protest peacefully;

The opposition leaders also declared that a massive protest will take place but did not specify its date.

Their speech was preceded by a short movie showing the actions of police dispersing the protest. During the film and the politicians’ speeches, people in the hall often broke into booing the police and Djukanovic, calling him a thief and chanting “together [we are strong]”.

After the speeches were delivered, the audience poured out into the street, and with their numbers augmented by 200 additional people, marched for 15 minutes with the leaders carrying a big banner reading “Freedom Calling Me!” No Russian flags, no T-shirts with Putin.

The rally quickly dissolved into the darkness. Two police cars were parked nearby but not a single accident occurred. No one broke the peace. Everything passed serenely.

Why PM Djukanovic Should Resign

But why not wait until the 2016 elections and defeat Milo Djukanovic’s Democratic Party of Socialists then, why demand his resignation now?

© REUTERS / Stevo Vasiljevic
Montenegro Continues to Accuse Russia of Involvement in Anti-Gov't Rallies
Mirko Vujosevic, a member of the central committee of the New Serb Democracy party and the chairman of the party’s executive committee in Podgorica, explained why protesting Montenegrins can no longer tolerate the prime minister remaining in his position.

The opposition accuses Djukanovic of numerous cases of election fraud and vote rigging. They feel that if the Montenegrin independence referendum in 2006 had been fair, the State Union with Serbia would have survived. And according to the opposition, in the 2013 presidential race Djukanovic’s ally Filip Vujanovic was defeated by Democratic Front candidate Miodrag Lekic; however, the prime minister again resorted to falsifications and Vujanovic came home an inch ahead of his rival. Therefore, the people want to bar Djukanovic from organizing election campaigns.

"He is enjoying permissiveness, and deserves a fair court trial."

Rados Zecevic, the New Serb Democracy’s member of parliament, echoed the opposition leaders’ message underscoring that he would accept defeat as the expression of the nation’s will, provided the elections are transparent.

He added that through the upcoming elections people are hoping to have the first peaceful change of leadership in the history of Montenegro – all the previous power shifts were physical.

As for NATO, Zecevic explained that the military alliance simply helps global powers such as Germany and France to feather their nests at the cost of robbing other states, with Syria and Libya provided as examples. He doesn’t want Montenegro to serve the bloc that bombed it in 1999 and added that even a hypothetical

Warsaw Pact with Moscow would be better.

"I trust only Russia. But if Montenegrins choose to join NATO on a fair referendum, I will have to respect their decision."

Milo Djukanovic came to power on the wave of the Anti-Bureaucratic Revolution in 1989. The only difference between that situation and the current protest is that now it is absolutely peaceful, cameraman Ivan underscored.

Are we about to witness a repeat of history?