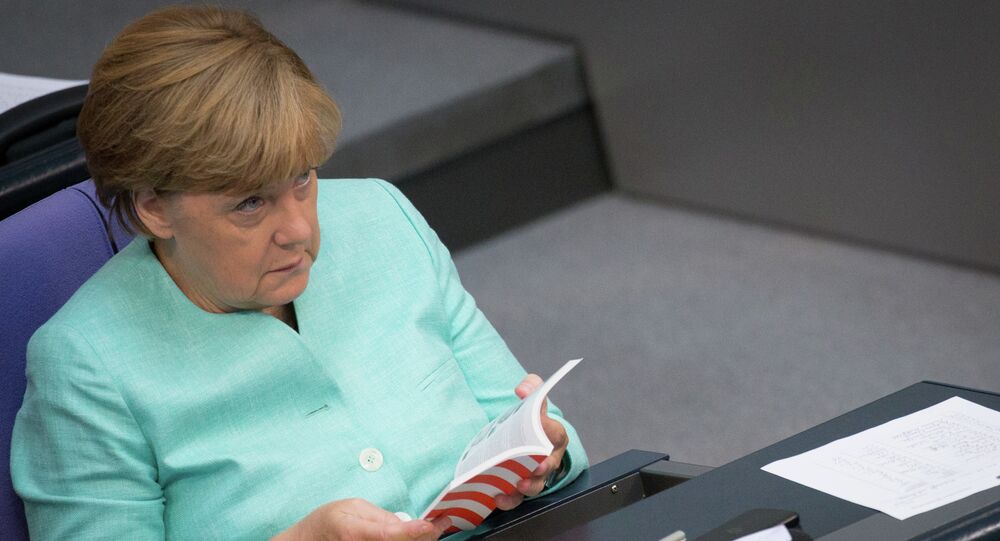 Merkel’s recent statements about the need to keep German borders open in order to prevent military conflicts in Europe is causing panic and anxiety among the German population, DWN wrote.

© AP Photo / Markus Schreiber
Deepening Crisis: Merkel Expects One Million Refugees by End of 2015
According to the newspaper, Merkel’s actions have surprised political observers as well, some of whom say that the German Chancellor is "overwhelmed" and that her era will soon come to an end.

The author argued that Merkel’s statements about the possibility of a military conflict are causing fear and panic among Germans.

“A warning of a war in Europe expressed by the German Chancellor in public is irresponsible,” the article said, adding that in this context Merkel’s statements about the need to keep the borders open sound confusing and ridiculous.

“The reaction of all ordinary people to such a threatening statement would be that they would want the borders to be closed quickly,” the author wrote.

The situation in the country is extremely critical. There is aggression and a tense atmosphere between various groups in refugee camps that may lead to an explosion anytime. Some refugees do not view the German authorities as an obstacle and do not take into account the local legislation when initiating violent clashes.

“Will Merkel send the Bundeswehr to the camps? The police have already called the Bundeswehr during violent clashes because otherwise they would lose control,” the newspaper wrote.

© REUTERS / Axel Schmidt
German Mayors Send Letter to Merkel Over Difficulties With Hosting Refugees
According to the newspaper, the catastrophic situation has its roots in Merkel’s irresponsible policy of open doors towards all refugees and migrants. Now at a time when the influx of newcomers is still increasing and the country’s authorities are completely overwhelmed, the situation may come out of control any time.

Germany and other European countries have been struggling to resolve the refugee crisis for many months, but without much success. Hundreds of thousands of undocumented migrants continue to flee their home countries in the Middle East and North Africa to escape violence and poverty.

One-Way Tickets: Germany May Use Military Planes to Deport Refugees