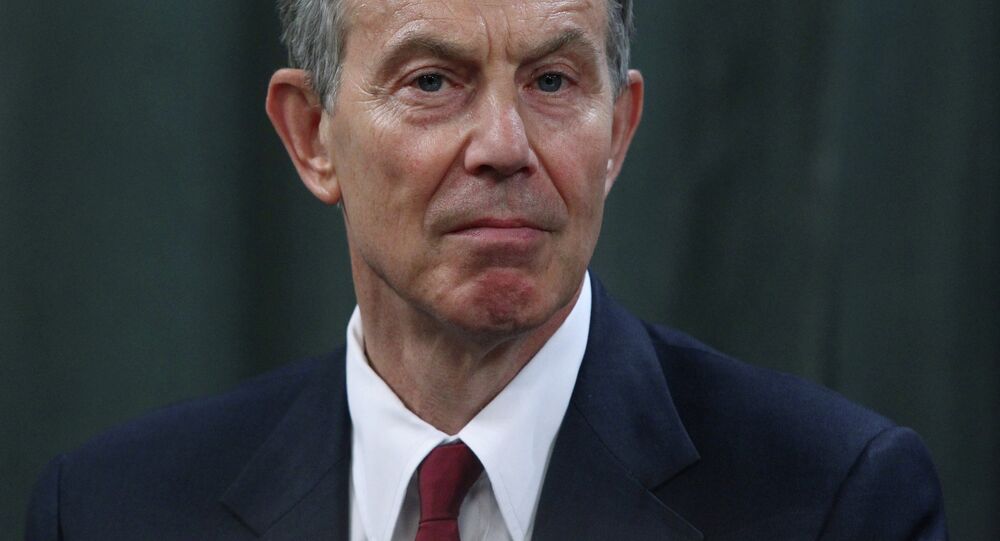 Former UK Prime Minister Tony Blair is coming under even more pressure over his decision to join the US and invade Iraq in 2003, after it was revealed ministers were told to burn and destroy a document which warned - on the eve of the invasion - that the move would be illegal.

© AFP 2020 / Saul LOEB
Secret Data Reveals Blair, Bush Plotted Iraq War Year Before Invasion
There have been rumors circulating for years that, in the run up to the invasion of Iraq, Blair's Attorney General Lord Goldsmith had written a legal advice note saying that the invasion could be ruled illegal under international law, without a UN resolution.

Days before the invasion, Lord Goldsmith appeared to mollify his advice, in public, but there have been calls ever since for it to be published. It forms part of the inquiry into the invasion under Sir John Chilcot, who said his report would eventually be published in June or July 2016.

Now it has emerged that when Lord Goldsmith's legal advice was delivered to cabinet ministers, they were told to: "Burn it. Destroy it."

A senior No 10 figure at the time told The Mail on Sunday:

"There was pandemonium. The date when war was expected to start was already in the diary, and here was Goldsmith saying it could be challenged under international law. They said "burn it, destroy it" and got to work on the AG [Attorney General]."

Blair was further accused of breaking international law because his invasion of Iraq was illegal and did not have the backing of the United Nations. In 2004, the — then — UN Secretary General Kofi Annan, was asked in an interview if it was true that the invasion was not sanctioned by the UN Security Council or in accordance with the UN's founding charter. He replied: "Yes, if you wish."

"I have indicated it [Iraq invasion] was not in conformity with the UN charter. From our point of view and from the charter point of view it was illegal."

The current Labour Party leader Jeremy Corbyn added his own criticism of Blair. "I think it was an illegal war, therefore he [Blair] has to explain that," he told the Newsnight program on TV.

Blair's government, in the run-up to the invasion, faced down one of the biggest popular uprisings Britain had seen against going to war over Saddam Hussein's regime. Blair agreed with the US President, George W. Bush's view that the Iraqi dictator had weapons of mass destruction that could be used against British targets.

Bush and Blair held private talks, the details of which have been kept confidential, but which — many believe — would lay bare the agreement Blair made with Bush to follow the US into a war for regime change in Iraq — this lay Blair open to charges of war crimes.

After years of pressure to uncover the deals made between Bush and Blair, the — then — British Prime Minister Gordon Brown caved in to public pressure and called for an inquiry which was launched in July 2009, chaired by Sir John Chilcot. Its terms of reference it was to: "consider the period from the summer of 2001 to the end of July 2009, embracing the run-up to the conflict in Iraq, the military action and its aftermath… the way decisions were made and actions taken, to establish, as accurately as possible, what happened and to identify the lessons that can be learned."

Five years after hearing the last evidence, the Chilcot inquiry — which has cost over US$16 million — will publish its report next summer. Those who are subject to criticism have been allowed time to read parts of the report and respond to them ahead of publication. Blair's office has always denied holding up the process.

Tony Blair: Invasion of Iraq Contributed to Rise of ISIL