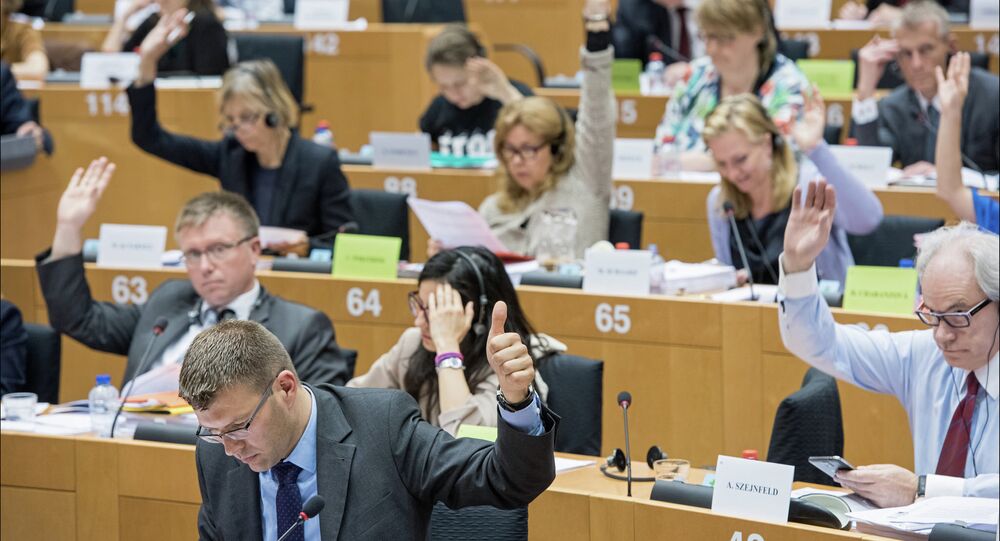 Edward Snowden's legal representative in Hong Kong told Sputnik that last week's resolution from the European parliament to prevent Snowden's extradition is a progressive step to protect the rights of citizens in the EU.

The approval by the European Union parliament of a resolution that calls on member states to prevent Edward Snowden's extradition to the US marks a "natural progression" to ensure greater protection for the rights of EU citizens, lawyer Robert Tibbo told Radio Sputnik on Sunday.

Despite the vote having no legal force, the resolution to offer protection from extradition to Snowden "definitely falls into a game-changing set of resolutions," said Tibbo, who represented Edward Snowden in Hong Kong.

"The EU has resolved to recognize that from its 2014 EU parliament report, necessary changes need to be made relating to electronic mass surveillance by government."

© REUTERS / Svein Ove Ekornesvaag/NTB Scanpix
European Parliament Demands EU End Persecution of Snowden, Offer Him Protection
The report identified issues such as a lack of transparency and government oversight, and deficiencies in policies and legislation that should ensure the privacy rights and human rights of EU citizens are not violated by surveillance programs, said the lawyer.

"The European Union in 2014 also mentioned the necessity to provide policy legislation and mechanisms to protect whistleblowers," explained Tibbo.

"That was a year and a half ago, and the resolution last week by the European Parliament was a recognition that European Union members have not done enough so far in terms of bringing about those changes."

© Photo : Screenshot: Council of Europe
Snowden Slams CISA: US Surveillance Bill Posing as Cybersecurity Won't Make Us Safer, Won't Stop Attacks
The resolution that was passed on October 29 was a "very significant step," said Tibbo, which follows a previous resolution in 2013, the 2014 report and a report from the UN rapporteur on human rights as early as 2009, which warned about a lack of protection for civilians' privacy and human rights.

"This is a natural progression, the European Union, based on evidence, based on law and policy, they are making rational decisions on how to move forward to protect European Union citizen's rights."

Hypocrisy 101: US Backs Free Speech for Dissidents Abroad, Except Snowden