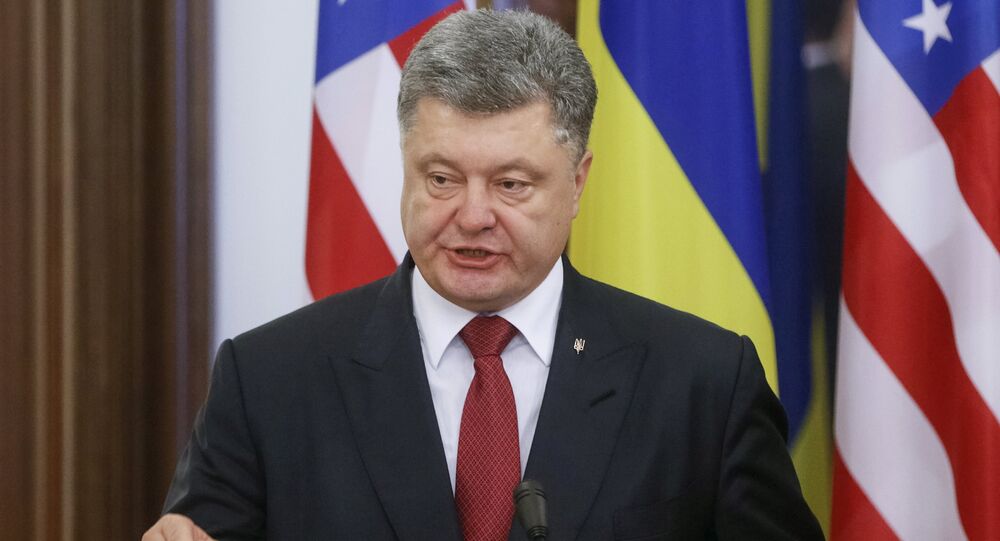 The leader of Ukraine's Radical Party has reportedly urged Ukrainians to unite against the "dictatorship" of President Petro Poroshenko following the arrest of another political party leader.

© REUTERS / Andrew Kravchenko/Pool
Judgment Day Looms Over Poroshenko as Ukraine Goes to the Polls
On his Facebook page, Oleg Lyashko, head of the Ukrainian Radical Party, has called on the citizens of Ukraine to protest against what he slammed as President Petro Poroshenko' dictatorship, media reports said.

Lyashko's comments came after Ukraine's Security Service (SBU) arrested UKROP party leader Gennady Korban. UKROP, which means 'Dillweed' in Russian and is associated with pro-Kiev volunteer fighters in Ukraine's Civil War, is funded by Igor Kolomoisky, an infamous oligarch who has been accused of cheating the government out of $1.8 bln in IMF loan money. Korban was charged with organizing a criminal group on Saturday; he was a mayoral candidate in the Dnepropetrovsk mayoral elections on October 25, the results of which still haven't been announced.

"We must unite in order to stop the dictatorship of Poroshenko. The president personally orders the SBU and the Prosecutor General's Office [of Ukraine] to arrest unfavorable opposition activists. It is a crime and a reason for impeachment," Lyashko said.

Meanwhile, Korban's lawyers have called his arrest a kidnapping because the Ukrainian government has not provided them with information about the charges against him.

Poroshenko can only stay until 2019 if he turns Ukraine into a dictatorship and kills + arrests most Patriots.

The SBU told media that Korban was arrested without being charged, and Ukraine's General Prosecutor's Office did not say what charges Korban was facing, although it told media that the operation overall was pursuing those responsible for creating an organized crime group, embezzlement and kidnapping and that a court would decide his punishment. It added that one Korban-tied group stole 40 million hryvnias ($1.7 million) from a fundraiser for pro-government militias in the Donbass region.

© Flickr / Kristina Alexanderson
Coming to the Dark Side? Poroshenko to Consider Lord Vader for Ukraine’s PM
While Ukraine continues police operations against Russian-speaking activists and advocates, this is the first time a Ukrainian nationalist party leader has been arrested by the post-coup government.

About 700 people held a rally in support of Korban in Dnepropetrovsk on Saturday evening, with mayoral candidate Boris Filatov saying that he does not rule out the possibility that a protest will take place in Kiev in the coming days.