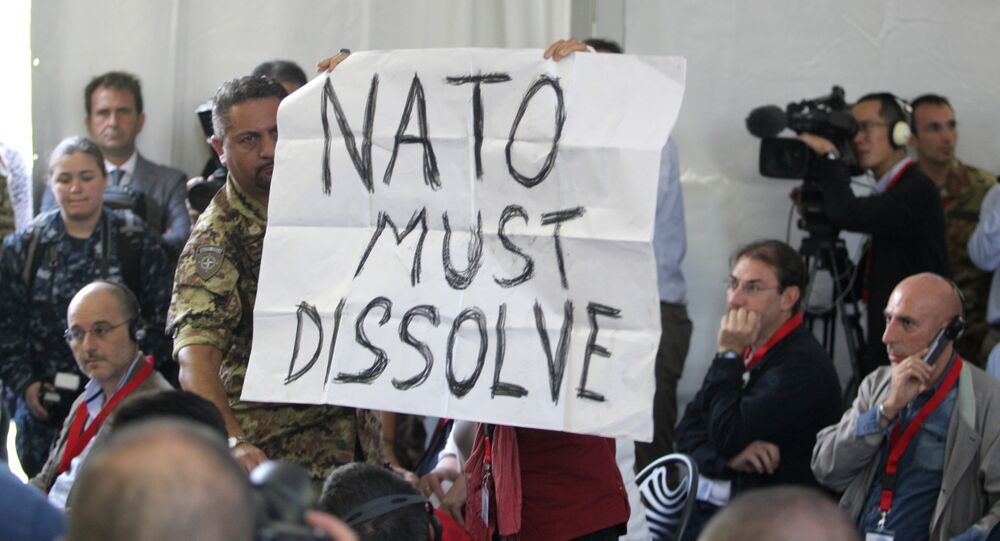 Chiara Paladino, one of the protest organizers, said around 1,000 people demonstrated in Marsala, south of the Vincenzo Florio Airport used as a NATO forward operating base.

© AFP 2019 / MARCELLO PATERNOSTRO
People Rally in Lisbon Protesting Against NATO Exercises
ROME (Sputnik) – Protesters in the Italian island of Sicily demonstrated against the North Atlantic Treaty Organization’s (NATO) Trident Juncture-2015 exercises on Saturday less than 10 miles from a NATO base.

The military alliance’s largest exercises in over a decade involving over 36,000 troops from 30 NATO members and partner countries, Trident Juncture moved into an active phase across southwestern Europe in mid-October.

"We are against NATO, against war, against the enormous costs that go to the upkeep of military bases," Chiara Paladino, one of the protest organizers, told RIA Novosti.

Paladino said around 1,000 people demonstrated in Marsala, south of the Vincenzo Florio Airport used as a NATO forward operating base. Anti-NATO protesters gathered from across the province of Trapani, including large Sicilian cities of Palermo, Catania, Messina and Ragusa, she said.

© AFP 2019 / SAVO PRELEVIC
Montenegrins to Vote Against Joining NATO in Case of Referendum
The rally is scheduled to wrap up at 17:00 GMT.

A similar anti-Trident Juncture and anti-NATO rally took place in the major Sicilian city of Palermo late on Friday.

The first phase of the Trident Juncture drills began October 3, running for two weeks in Canada, Norway, Germany, Belgium and the Netherlands. The second phase, which ends on November 6, is taking place in southern Europe – Spain, Italy, and Portugal – as well as in the Mediterranean Sea and the Atlantic Ocean.

Spanish and Portuguese demonstrators staged protests against NATO this month.