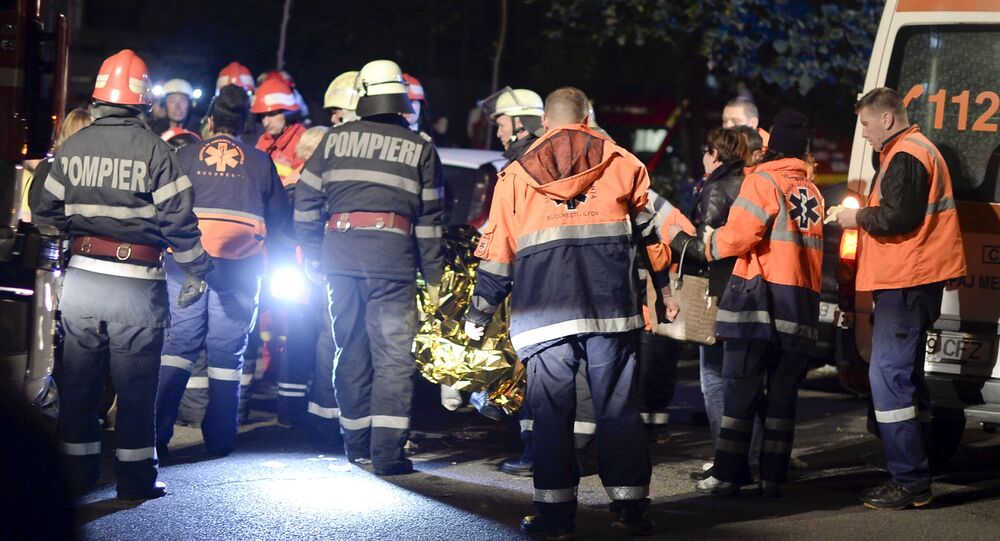 A blast in a Bucharest club has left 27 dead and at least 180 injured, according to Interior Minister Gabriel Oprea. Bucharest hospitals are running out of space to treat the wounded, according to local media, and health officials are asking locals to donate blood to meet the demand.

The explosion was confirmed early Saturday by Romania's Interior Minister Gabriel Oprea and Health Secretary Raed Arafat, though its cause is not yet known. Reports indicate that the incident occurred at a club known as Colectiv, in downtown Bucharest.

"It is a great tragedy, 25 are dead," Oprea said, according to EVZ portal.

More than 60 ambulances and fire trucks were on the scene, according to a press release from the Interior Ministry. A mobile hospital has been set up to treat wounded, but witnesses say on-site medical professionals have insufficient supplies to meet the demands of the situation.

"There was a stampede of people running out of the club," one witness told Reuters.

According to BBC, the blast resulted in a large fire.

"I want to give you the official data, there is a crisis, everyone was mobilized and try to do everything we can," Health Minister Nicolae Banicioiu told reporters. "We are bombarded with the number of severe cases. Victims were sent to the hospital emergency in the capital."

25 are confirmed to have died in a club in Bucharest, Romania. 88 said to be submitted to hospital. pic.twitter.com/kzw93UqjrJ

Floreasca Hospital is reportedly filled to capacity, with victims being transported elsewhere, according to Antena 3. Between 300 and 400 individuals were inside the club at the time of the incident, and many are still unaccounted for.

"It is a very sad day for all of us, for our nation and for me personally," Romanian President Klaus Iohannis wrote on his Facebook page, adding that he was "deeply grieved by the tragic events that happened this evening in downtown."

The Romanian TV channel also suggested that the explosion could have been caused by fireworks, though authorities have not released any details at this time. One witness also described a pyrotechnic display around the stage that which led to the fire.

According to scheduling, the band "Mantras of War" played an album launch concert at Colectiv on Friday night.