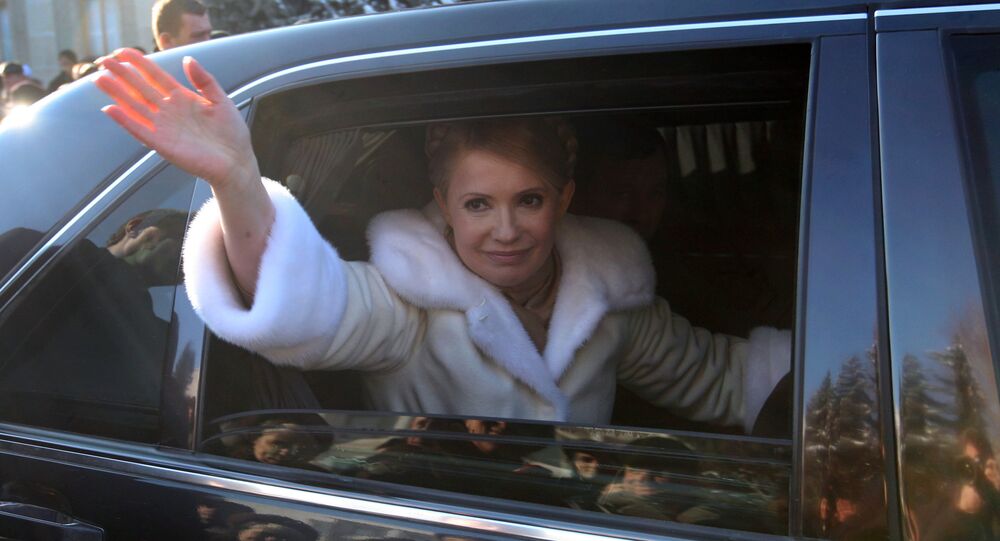 The Ukrainian Interior Ministry has reportedly confirmed that the country's former Prime Minister Yulia Tymoshenko had ridden a Mercedes Benz which had been stolen from a fleet of cars owned by ex-President Viktor Yanukovych.

© Sputnik / Evgeny Kotenko
She'll Be Back? Yulia Tymoshenko Has Her Sights on Ukraine's Premiership
Ukraine's former Prime Minister Yulia Tymoshenko rode a Mercedes Benz hijacked from a fleet of cars owned by ex-President Viktor Yanukovych, according to the Ukrainian Interior Ministry.

Its official response was published on Euromaidan's Facebook page.

The response came after Ukrainian activists questioned why police had confiscated the Mercedes from Ukraine's Batkyvshchina (Fatherland) Party, once controlled by Timoshenko.

The activists referred to a black Mercedes Benz S600 Limousine Lang with an engine capacity of 5,513 cubic centimeters. The car was produced in 2011 and was reportedly worth about 800,000 dollars.

According to the Ukrainian Interior Ministry document, the vehicle was confiscated in connection with an ongoing criminal investigation. The inquiry referred to the car with the same chassis registration number, but with different license plates.

As for the Euromaidan group, it also published links to other documents, which referred to Tymoshenko's Mercedes Benz as a car stolen from a fleet owned by former president Viktor Yanukovych after his overthrow in 2014.

© Sputnik / Stringer
Former Ukrainian Prime Minister Tymoshenko Calls to Abolish Naftogaz
Tymoshenko served as Ukraine's Prime Minister from January 24 to September 8, 2005, and again from December 18, 2007 to March 4, 2010.  After she stepped down, she signaled her readiness to join the Ukrainian opposition.

However, in October 2011, she was sentenced to seven years behind bars for the abuse of office during the signing of gas agreements with Russia.

On February 2014, she was released from prison following Yanukovych's ouster and shortly after, she announced her decision to run for President. She obtained 12.81 percent of the vote, and yielded to Petro Poroshenko. Later that year, she was elected  as a deputy of the Batkyvshchina Party during the country's parliamentary elections.