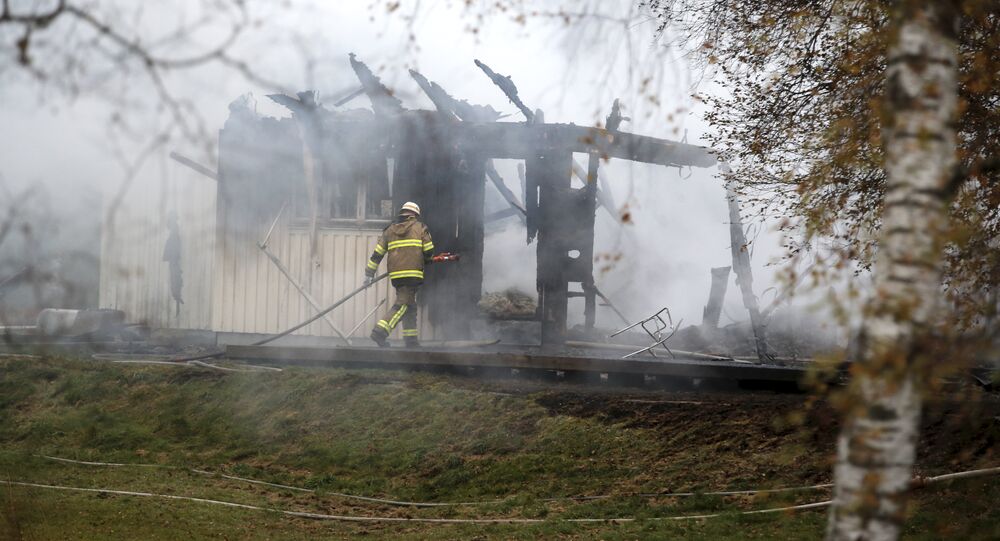 A fire has reportedly ripped through yet another facility for asylum seekers in Sweden; it is only the latest in an array of hate-fueled arson attacks that have brought emotions to a broil in the country in the past few weeks.

© AFP 2021 / JONATHAN NACKSTRAND
Sweden to Tighten Immigration Laws Amid Record Refugee Inflow
Fire struck a facility for refugees in the central Swedish town of Höör on Thursday in a suspected arson attack that became the latest in a series of such incidents in Sweden in the past few weeks, the Swedish newspaper Aftonbladet reported.

According to police, someone splashed flammable liquid through the window of the refugee building in Höör, and then set it on fire.

The staff reportedly managed to tackle the blaze with a fire extinguisher and there was no immediate word on injuries.

More than 10 arson attacks have occurred in Sweden in the past four weeks, all of them targeting migrant workers; meanwhile, the number of foreigners seeking asylum in the country has risen with each passing day.

This is where volunteers help newly arrived refugees. Heroes. If you can and have the means they do need some stuff. pic.twitter.com/OkuZ0kikdN

Arsonists, in particular, attacked refugee facilities located in Sweden's southern, eastern and western areas. Police officers, who are already on heightened alert, have yet to make progress in finding whoever is responsible for the attacks, media reports said.

Speculation is rife that some citizens are reluctant to cooperate with police when it comes to tracking suspected arsonists, who seem to have already damaged Sweden's reputation as the most peaceful country in the world.

According to a Swedish Migration Agency prediction made in July, the country originally expected 66,000 to 80,000 asylum seekers in 2015. The current projected number of refugees for 2015 already exceeds 95,000, the agency said last week.