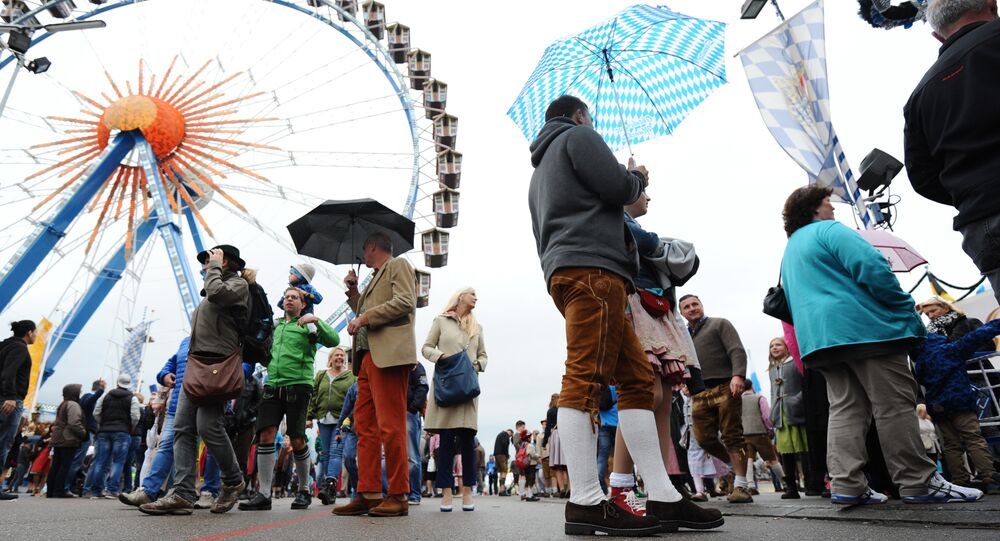 German Chancellor Angela Merkel is coming under more pressure after the Prime Minister of Bavaria hit her with an ultimatum to tackle Austria over its failure to stem the flow of refugees and migrants flooding into the southern German state.

Bavaria's Prime Minister Horst Seehofer sharply criticized Austria for its lack of co-ordination allowing thousands of asylum seekers every day to flood over the border into the state, which has borne the brunt of the refugee crisis. Seehofer has been critical of Merkel's 'open doors' policy, which has led to hundreds of thousands moving across into Europe fleeing war zones in Syria, Afghanistan and Iraq.

© AP Photo / Petr David Josek
An Austrian policeman with a dog tries to maintain order after migrants left a camp on the border with Slovenia in Spielfeld, Austria, Thursday, Oct. 22, 2015

As he called on Merkel to tackle the Austrian government head-on, Seehofer said:

Seehofer also called for the unco-ordinated wave of refugees on the so-called Western Balkan route to be terminated immediately:

Seehofer noted that Merkel set a deadline of November 1 for Berlin to take control of the border issue with Vienna, otherwise "we need to consider what options we have."

"We were not prepared for it," said a spokesman for the police. He said they had no warning from the Austrian authorities. The refugees were believed to have been taken by bus to the German border.

The President of the District Councils, Reinhard Sager warned that there was a limit on the number of people they could deal with and that the system was close to collapse. "We can no longer bear it," Sager told Ruhr Nachrichten.

"Germany's Chancellor Angela Merkel's perceived opened-ended welcome to all migrants is a colossal, historic mistake for the European Union. It's political folly on a grand scale."

"Her decision sent a powerful message to migrants, whether Refugee or Economic, that irrespective of international law, Germany was now a viable destination to go. Any basic research on what tools migrants use to navigate their way from safe havens in Turkey and Jordan shows that social media, amplified by word of mouth communication, plays a huge part in both the decision whether to migrate and a migrant's destination of choice. This increases the speed and numbers of those wishing to leave the safe havens where many currently reside," he told UKIP members in the north of England.

Merkel's offer to take in over 800,000 refugees by the end of 2015 and to breach the Schengen and Dublin Agreements on a borderless Europe and asylum policy has thrown it onto a collision path with its fellow European countries. Schengen calls for a borderless Europe, while the Dublin rules say asylum seekers must be processed in the country of landing.