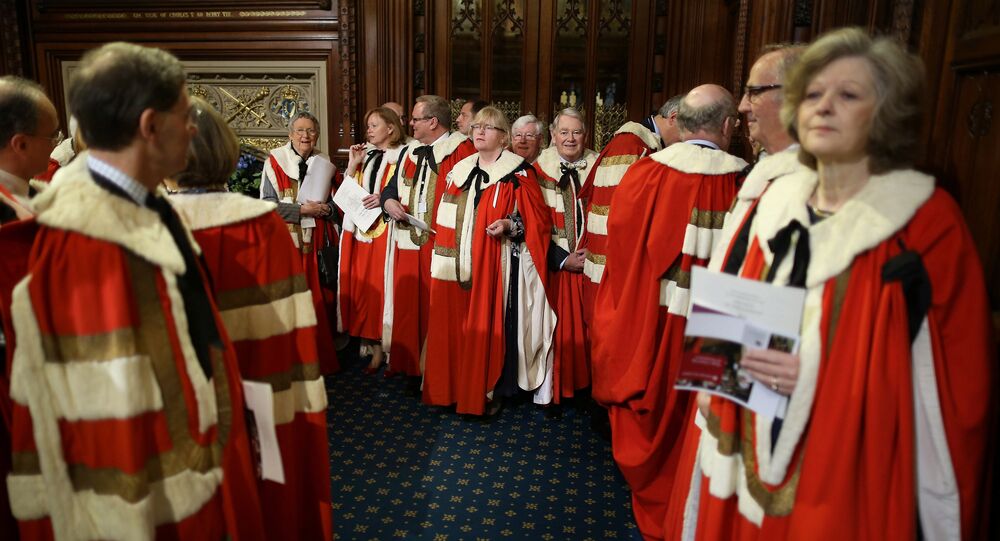 The UK government was plunged into a constitutional crisis after the unelected House of Lords voted to delay cuts to the welfare budget, agreed by the elected lower house, which would have left the poorest in the country worse off.

© Flickr / DncnH
UK Facing Backlash Over Austerity Policies as MPs, UN Turn Up the Heat
UK Prime Minister David Cameron has said he will act to curb the powers of the House of Lords after unelected members of the upper house threw a spanner in the works of one of the central pillars of his party's manifesto pledge to slash the welfare budget and balance the budget by 2019-20.

The UK parliament is divided into two houses — the House of Commons, made up of elected lawmakers and currently, led by the majority Conservative Party, and the House of Lords, made up of unelected political appointees.

Chancellor George Osborne has proposed a series of cuts to the welfare budget, including US$6.75 billion of savings to the tax credit scheme, which would have left millions of the poorest in the country more than US$1,500 worse off.

The welfare cuts were a manifesto pledge that saw Cameron's party swept to power in May 2015 on a promise to cut back state spending and to reduce the country's deficit. The elected lawmakers in the House of Commons passed a motion to back Osborne's cuts last week, however the House of Lords Monday night voted to reject the cuts, breaching an implied rule that the upper house does not overrule the lower house on fiscal issues.

Cameron is now faced with several options, including flooding the House of Lords with Conservative peers or reining in the powers of the upper house. Osborne reacted with anger to the Lords' vote, saying the matter would be "dealt with" by himself and the prime minister.

Just a reminder — what senior Tories have said about #taxcredits pic.twitter.com/WzS54Z68id

Chris Grayling, the Leader of the House of Commons said: "It's not a question of bullyboy tactics. You have to bear in mind last night Lord Butler, the former Cabinet secretary, said very clearly that the House of Lords was taking a constitutional step that it should not take.

"We can't simply leave the Labour Party and the Liberal Democrats and the House of Lords to tear up the manifesto on which we were elected in May. That's a real issue politically for all of us."

However, one of Cameron's own lawmakers David Davis sprang to the defense of the Lords, saying:

"The simple truth is that this was an incredibly important, possibly harmful, thing to 3 million people — hard-working families, the people we are supposed to support — and somebody had to tell the government to think again."